I love travel overland and have gone with Dragoman in West Africa and Central Asia. While in South America, I take my third long overland trip from Quito to Guatemala passing through Colombia, Panama, Costa Rica, Nicaragua and Honduras. This 47-day trip will end in Antigua, Guatemala on May 10.  March 25 – 27: Ecuador

Today marked the beginning of my 47-day trip and my 18th day in Ecuador. As the group briefing session would not take place till 6pm, I spent my time in the Museo del Banco Central in the morning and the Old Town in the afternoon.

I paid my first visit to the Old Town in the rain on March 9 before going to Galápagos. Today the weather was good when I got there around 12:30pm. It became cloudy when I was wandering around the narrow alley of La Ronda filled with art galleries, cafés and restaurants with a bohemia feel, Plaza San Domingo, Plaza San Francisco and Plaza de la Independencia.

I also visited the Museo Manuela Sáenz (lover and follower), La Compañía de Jesús (1605-1760) which is said to be the most beautiful baroque church covered in gold in South American, Iglesia de San Francisco (1534-1604) and Museo Francisano.   It started to rain and I took refuge at Museo Camile Egas (1889-1962). It is a small museum but has a good collection of his paintings. My last stop of the day was the Basilica the largest church built in Gothic style in Ecuador that took over 100 years to complete. Here I met Sophie and Katherine, the two sweet young Danish students again. It is indeed a small world!

While I was in the Old Town, I was advised by locals at least five times not to take my camera out or avoid anyone who tried to be in my way. I also saw a heavy presence of police on every street. Does it mean Quito is not a safe place for tourists?

Travel is my living classroom. I visited the Museo Manuel Sáenz (1797-1856) as I am amazed by this woman, a revolutionary hero born in Quito and died in Paita, Peru. She married a wealthy English merchant in 1817 but left him in 1822 to spend her time by Simón Bolívar’s side as his collaborator and mistress till his death in 1930. I am not impressed by this museum.  Though La Compañía de Jesús is lavish, elaborate and covered in gold, I prefer the classical and wooden architecture of Iglesia de San Francisco and the Basilica’s gothic and serene architecture with beautiful stain glass.

There is a lot to see in Quito.  I missed the Cathedral as it was closed. I could not join a tour to the Palacio Gobierno as all the free tickets had gone. I did not have time to visit the Museo Fundación Guayasamin (1919-1999), Ecuador’s most famous contemporary artist and to see his masterpiece, Capilla del Hombre (Chapel of Man) and take a look of Quito from El Panecillo which has a huge statute of the Virgin of Quito or from the top of Cruz Loma (4100m).

At 6pm, I met Andy our leader and Ricky the deputy leader and 15 fellow travelers (five males and ten females) from six countries (Amy & Lachi, Yvonne and Gordon, AJ, Nam and Naomi from Australia), Denise, Jane and Michelle from Ireland, Freddie and Anika from Germany, Andreas from Switzerland, Marina from Holland and David from England). The oldest person on the truck is 65 while the youngest is 26. I am the fourth oldest person on the truck.

I was in a bad mood as something had happened to a close friend. I had a sleepless night. 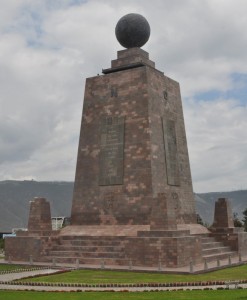 I got up at 6am to work on the notes on Galápagos.  This took my mind off unpleasant thoughts and I felt better. We were supposed to leave at 8:30am. But our truck ‘Gus’ was stuck in a lorry car park as the exit was blocked by another truck. Andy and Ricky had to wait for the driver. While I was waiting, I uploaded my travel notes on Galápagos. Finally Gus turned up at 10:30am and we gladly uploaded our stuff.

Gus was on the road at 10:45am. At midday, we arrived at the first stop of this journey namely the Mitad del Mundo (The Middle of the World) which is a tourist complex on the Equator. But the real Equator is close to the Museo Solar Inti Ňan. The only thing of interest here is the French pavilion which has a detailed account of the scientific mission which arrived in Ecuador in 1735 to ascertain the location of the Equator.

Gus was back on the road at 2pm. We arrived in Otavalo (2550m) at 4:30pm and had an hour of free time. I am delighted to see the indigenous women wearing their traditional costume made from intricately woven and decorated fabrics. They also cover their hair with black woolen scarf in an artistic way and wear heavy jewelry around their neck.

Otavalo is famous for its Saturday market which sells a wide range of handicrafts, clothing, weavings, ceramics etc. I am more interested in the daily life: I went to the food market instead. I saw roast pig heads in several eateries.  I was tempted to try but gave up the idea. But I did taste another popular local dish with stewed pork which is delicious. The blouses with heavy embroidery are pretty. But I was shocked to learn that they cost $30-80 each!

Tonight, we stayed at the Rose Cottage run Mark from the UK and his Ecuadorian wife. There are eight cottages at the foothill of a volcano. I had a very mild chicken curry and a beer. I rained in the evening. I was tired but still had trouble in sleeping.

I got up at 6am. The air was fresh and the mountains were veiled in mist. I worked on my photos till breakfast at 7:30am. Mark offered to take the group to a waterfall nearby. At 8:30am, Freddie, AJ and I set off with Mark on a 6-km hike.

The path to the waterfall was muddy and slippery. Luckily I had my hiking boots and walking poles and managed to reach the waterfall without falling! It was a perfect day for hiking with sunshine and the right temperature. The waterfall though not spectacular is worth visiting. The scenery from the waterfall to the main road is beautiful with full views of five volcanoes, the Rose Cottage and fertile green valleys.

We arrived at the meeting point on the main road at 10:30am. I really enjoyed my morning exercise. Gus hit the road at 10:45am. We had our first picnic lunch in a gas station around 1pm and arrived at the border at 2:30pm. The border facilities are good with polite immigration officers. We were out of Ecuador before 3pm. I changed $20 for Colombian peso (COP) and got COP$39000.

Remarks on my 19-day stay in Ecuador

I cannot believe I have spent 19 days in Ecuador. As I have spent most of my time in Galápagos, I have not seen much of the mainland except the stretch from Quito to Otavalo.

In brief, I had a good time and a good impression of Ecuador. It is orderly with good roads and things work! The government has succeeded in taking many people out of the poverty line. I was told less than 20% of the population is now living in dire poverty. I find the people nice and helpful.

However, Ecuador is not a cheap destination especially for those going to Galápagos. The landscape and mountain scenery I have seen are impressive. I would like to learn more about its rich history and different cultures. Out of its four World Heritage Sites, I have yet to see Cuenca and Sangay National Park. I also hope to visit Yasuní National Park and the Avenue of the Volcanoes one day.