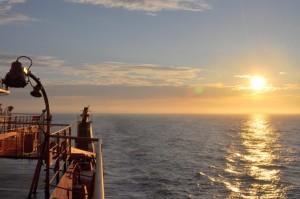 Bright sunshine at 1:30am

The World Cup match between Germany and Algeria was on that evening. As I was not ready for bed, I joined the crowd and watched the match for half an hour. But the room was too hot and I found the heat unbearable. When I returned to my room around 1am, the score was still 0-0.

Neither my roommate Guan nor I could sleep. At 3am, both of us suddenly saw bright light shining through the curtain. I went out to the deck to take a picture of the sun. I did not doze off till 5am.  At 7:30am, Alex gave us a wake-up call with an announcement on the weather and a reminder of the disembarkation arrangement.

The weather was fantastic and warm. After having my last breakfast on the boat, I wandered around the deck for the last time. By 10am, I was on board a tourist bus for a short sightseeing tour before leaving for Helsinki.

Murmansk (68ᴼ58’N, 33ᴼ 05’E) is the largest city north of the Arctic Circle. Founded in 1916 as the last city of the Russian Empire, it was a link to the Western world for Russia during the World War II. The port of Murmansk remains ice-free year round due to the warm North Atlantic Current and is an important fishing and shipping destination.  It is also the home port to Atomflot, Russia’s fleet of nuclear-powered icebreakers, the headquarters of Sevmorput (the Northern Sea Route) and the administration of Russian Arctic maritime transport.

The city is linked by rail to Moscow and St Petersburg (18 hours to the former and 15 hours to the latter). It has four ports which stretch over 12kms.  It is set to be the Russian terminus of the Arctic Sea Bridge, a sea route linking it to the Canadian port of Churchill, Manitoba. Once developed, the bridge will serve as major trade route between Europe and Asia.

Our guide born in Harbin speaks good English, Her family flee to China during the 1917 Revolution and moved back when she was young. After marriage, she followed her husband to Murmansk where she has been living for over 30 years. Our first stop was the war memorial park which affords panoramic views of the harbour and the city. A massive 35.5-meter tall statue Alyosha, depicting a Russian World War II soldier, has become a landmark of Murmansk since its installation in 1974.

We then went to the port and had a guided tour on Russia’s first icebreaker named after Lenin.  Built in 1959, it retired in 1989 and has been turned into a museum. Over 150,000 visitors including world leaders have visited the museum since its opening in 2009. It’s well-maintained and its design is similar to our boat ‘50 Let Pobedy’ but much smaller (15,000 tonnes). I am impressed by the wooden interior which is elegant and beautifully done.

After lunch at a hotel, we were dropped off at the airport. Our flight took off before 4pm (GMT+3) and we arrived in Helsinki before 5pm (local time). By 6pm, we were at Hilton Hotel Strand in the city centre. I shared a nice room with Guan for the last time. I joined the Hong Kong gang for dinner in a nice local restaurant. We had a salmon soup, shared three popular local dishes namely, sausages, beef liver and meat balls and paid €18 each. Great value!

I had been suffering from sleep deprivation.  After an excellent hot shower (the first good shower since boarding the boat on June 20), I went to bed straight away and slept like a baby.

I had a late flight to Hong Kong. Hence, I gained a full sightseeing day in Helsinki. I got up at 8:30am in order to say good-bye to Miss Guan. I sumptuous late breakfast with the Hong Kong gang. I left the hotel at noon. First, I strolled along the Uniongarten to reach the historical centre of Helsinki. I stopped at the Uspenski Cathedral and enjoyed the second half of an organ recite till 12:20pm. The interior of the cathedral is white, serene and elegant without an elaborate altar.

Then I arrived at the Senate Square which is impressive and atmospheric: the architectures and colours of the surrounding buildings are most beautiful on a sunny day with blue sky.

Finally I reached the harbour and visited Helsinki’s biggest outdoor market which was infested with cruise ship tourists. I then took a boat to Suomenlinna (Sea Fortress), a bastion fortress of irregular shape built on uneven terrain and on separate islands. It is an example of the European military architecture of its time and is now a World Heritage Site. The ferry runs every 20 minutes and the fare for a return ticket is only €5.

Suomenlinna founded in 1748 when Finland was part of the Kingdom of Sweden, bears witness of the changing fortune of the country. In 1750, it was named Sveaborg by King Frederick I of Sweden. During the Finnish War in 1808, the fortress surrounded to the Russian army and became a Russian naval base. The newly independent Finland took it back in 1918 and renamed it Suomenlinna.

This is my second visit to Suomenlinna. I had a good time owing to the fine weather and my good mood! I spent over three hours strolling around the four islands which are all linked up.

I reached all the main attractions namely the Suomenlinna Church, the dry dock observation deck, the tomb of Augustin Ehrensvård, the earthworks and guns of Kustaanmiekka and the King’s Gate. There are six museums but I only visited the Customs Museum which is free.

I took the 5:20pm ferry back to the harbour. I spent the next hour making my way back to the hotel. Taking a different route, I walked along Aleksanterinkatu before reaching the Ateneum Museum and Railway Station both with striking architecture. I followed the main road Kaisaniemkatu which joins with Uniongarten. I met up with my Australian friend Andy and his mom and took a bus to the airport (€5). We were earlier and checked in before 8pm. I was lucky to have an upgrade as the plane was full.

Unfortunately the lounge which takes Priority Pass closes at 8pm.  So I spent the evening chatting and drinking with my friends. Time passed surprisingly quickly and boarded commenced at 11pm. I had a pleasant flight to Hong Kong. The plane took off at 11:40pm. I managed to sleep for five hours because of the comfortable seat which turns into a bed.  I arrived in Hong Kong shortly after 2:30pm, got my luggage and left the airport around 3pm and took the airport bus A21 to Yaumatei.  Sally, my sister-in-law already awaited me at the bus top. I stepped into my tiny but cozy flat 4:15pm ending my 7 month-long round the world trip.

The journey to the North Pole is one of the most memorable journeys in my life. I am glad that I made up by mind to join despite the high price when I was in El Salvador. Everything fitted in beautifully: the weather improved as we were approaching the Pole and I have seen six polar bears. To step on pack ice, have a hot-air balloon ride and a BBQ at the Pole were something unthinkable when I was young. It is a blessing for me to celebrate my 60th birthday by watching midnight on my way to the Pole. Though one can find more interesting wildlife on other polar trips, the journey to the Pole itself is a unique experience.

Though I am getting old, I am still curious and hope to go places! The oldest passenger on the boat is a healthy and cheerful 84-year-old man from the States. He is my model: I should perhaps revisit the Pole when I am 84!

Posted under My Europe trips,Uncategorized
Comments (2)