We joined a diving trip: I paid P3,800 for three dives with half a dozen certified open-water divers. The first dive was at Cauayan Rock. The corals are fairly good and we had to get through a narrow gap overhung with corals. Unfortunately the water was not crystal clear. The second dive was a rift dive with clearer water. This was the best dive for the day: I saw a cute and beautiful blue-spotted ray, colourful corals with various shapes and types. Then we had a nice lunch with fish and chicken. After lunch, we had one more dive. As the sunlight was dim, the corals looked less colourful. The water was not clear. Anyway, it’s good exercise for me!

As Leuk and Lili had not dived since they had their first dives two years ago, they had to take refresher dives with an instructor (P4,800 each for three dives). They had a good time and the instructor said they did well. They were happy as they saw a lot including a marble ray, a turtle, corals and all sorts of fish. They were lucky!

Our original plan was to hire a kayak for a day for P600: Leuk and Lili could kayak to Cadlao Island. The weather did not co-operate: torrential rain ruined their plan when the coast guards stopped kayaking activities. So we spent the morning in the room surfing internet and reading.

When the sky cleared up, we decided to take a tuk tuk to Los Cabanas Beach for a zip line adventure. I like zip line and my first go in Costa Rica a couple years ago. Here the 750m-long zip line erected at a hill top links the mainland with an island opposite. It costs P500 a person. Leuk and Lili waited for almost an hour for their turn because the operator has only a few worn harnesses and equipments which have to be brought back from the other end of the line every now and then. When it was their turn, heavy rain returned. They had a thrilling wet adventure which was over within a minute or so!

In the evening, we returned to the restaurant we had our first seafood dinner in El Nido as we missed the garlic prawns. This time, we had rice noodles too – Lili’s favourite. They brought a few T-shirts with designs they picked.

We took the 10:30am bus (P500 pp) and were back in Go Hotel before 3:30pm. We were hungry as we had no lunch. As we found nothing enticing, we took a local bus to the town centre where Leuk and Lili had visited with the group. We had a lovely seafood dinner served on banana leaves for less than P1,000. We watched the locals eating with their hands but preferred to stick with our knife and fork. While I spent the night on my travel notes in the hotel room, Leuk and Lili went to the cinema.

We got up at 6:30am and took a tuk tuk to the airport for P200. When we tried to check in two suitcases, we were told we had only paid for one check-in luggage. I was frustrated: the agent had overcharged us for the ticket and had not bothered to inform us of the number of check-in luggage it had paid for us.

The plane took off before 9am and we arrived at Manila airport shortly after 10am. The exchange rate at the airport was RMB1 to P6.6. But for HK$1, one could only get P5.4. As I had to pay for the hotel in peso, I changed some RMB into peso.

I had booked online a family room in a hotel on Evangelista Street. It turns out that hotel is run by Taiwanese and the family room with share facilities is located in the hostel section on the ground floor. The hotel rooms are located on the second and third floors. I must admit that the hostel is super clean with comfortable bunk beds. But there is no window and I cannot stand confined area!

In the afternoon we walked along the Antonio Arnaiz Avenue to the Greenbelt Mall located at the heart of Makati City, the central business district of Manila. The complex includes five malls, hundreds of cafes and eateries, upscale brand shops, plenty of green open space, a chapel and artist space. In addition, there is a cluster of large malls nearby. After having fried rice noodles in a food hall, we split up. I strolled around and walked into the Manila Peninsula Hotel. When I met them up at 4pm, I gave them a surprise by taking them to the Peninsula Hotel for high tea. They had never had such a treat. We had a great time paying only P1,500 for a set for one person and a ginger ale for me. Great value!

I left them and returned to the hotel by taking the MTR from Ayala. I got off at Buendia but could not find my way in the dark. I stopped in a snack shop to ask directions. The owner is very kind and gave me a ride in his motorbike. He also had to ask twice for direction. What an experience!

Leuk and Lili are both cautious. They would not take chance and had followed the same route walking back to the hotel. They had a good laugh when I told them what had happened. Lili thought I was adventurous. I am only foolhardy!

We love to travel like locals. Today, we followed Antonio Arnaiz Avenue to the Liberbad station to take the LRT Line 1. We got off at the UN Avenue station and walked through the Rizal Park to reach the National Museum which is housed in a grand colonial building. There are two special exhibitions on textiles and other artifacts from different parts of the country. We spent almost an hour and a half looking at beautiful exhibits with good illustrations! 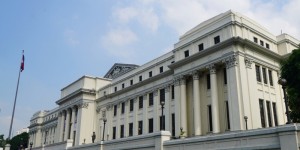 We were considering whether to visit the National Gallery next door when a man came up to us. He proposed a tour of Intramuros on tri-cycle for P350. I took his offer as a gesture to help the local economy. But the tri-cycle is tiny and the seats are most uncomfortable. The man who is the guide stood at the back of the tri-cycle. I felt sorry for the poor tri-cyclist and the vehicle moved at snail pace. Our guide hardly gave any useful information on the history of the walled city and its main attractions. So we jumped off after an hour’s ride.

It’s about 1pm and we were hungry. I took them to the Bayleaf Hotel and had Italian pizza and pasta which were most delicious. The lunch cost P1,500. Great value! We had superb views of the old city and the walls, the Manila City Hall, Intramuros Golf Club, the Rizal Park, the Manila Bay and the surrounding area from the roof-top terrace.

Intramuros is the oldest district and historic core of Manila. It is also called the Walled City. Construction of the defensive walls was started by the Spanish colonial government in late 16th century to protect the city from foreign invasions. The 0.67-km² walled city was originally located along the shores of the Manila Bay, south of the entrance to Pasig River. The city was guarded by Fort Santiago, a citadel located at the mouth of the river. The walled city was heavily damaged during the battle to recapture the city from the Japanese Imperial Army during the WWII. Reconstruction of the walls began in 1951.As a result of reclamation, the walled city is no longer next to the bay.

The gem in the walled city is the Church of the Immaculate Conception of San Agustin, the first church built on the island of Luzon in 1571 after the Spanish conquest of Manila. The Augustinian Order was the first order to evanglise in the country. The church was destroyed in the mid 18th century and later in 1898 and WWII and rebuilt. The present church has been richly endowed with fine retablo, pulpit, lectern and choir-stalls with crypto-collaterial chapels lining both sides of the nave.

The stone barrel vault, dome, and arched vestibule are all unique in the country. A monastery complex formerly linked to the church was all destroyed in 1945 except one building. This church together with three other baroque churches in other parts of the country has been inscribed on the World Heritage List. 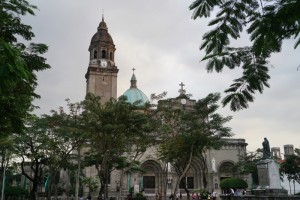 It was 5pm when I came out of the church museum. Leuk and Lili had already gone as they wanted to go to the Manila Ocean Park Park in the Manila Bay.

I had a nice stroll in the walled city with a stop in the Manila Cathedral before crossing the river. I saw the San Sebastian Church (1891) from a distance. A service was going on when I walked in. The lit up church with many church-goers and beautiful stained glass looks unique and charming. I later discover it is the only all-steel temple in the Philippines and the only prefabricated steel church in the world.

As it was getting dark, I decided not to walk to China Town and return to the hotel by taking the LTR. A local suggested me take the bus running along the Taft Avenue instead of walking to the Central Station. He made sure I got on the right bus. Unfortunately, the traffic was bad and it took me almost an hour before I arrived at the Liberdad LRT station. It took me some 15 minutes to walk back to the hotel. The street was lively with locals eating, shopping and hanging. Leuk and Lili were already back in the hotel as they had taken the LTR. They are smart and more sensible than their auntie! 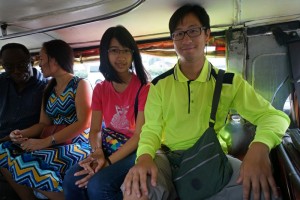 A ride on a minibus

As our flight would be leaving after 7pm, we had almost a whole day in Manila. But in view of the traffic jam, we had been advised to depart for the airport by 4pm the latest. As a result, we decided to visit the Mall of Asia (MoA) which is said to be the largest one in Asia. We had to take two local buses before arriving at MoA. Unlike the Greenbelt Mall which is all surrounded by modern and smart buildings and parks, the architecture of MoA looks dull and lack of character. Though shopping is of no interest to me, I still had a nice time as I found a number of hiking and sports shops. I ended up buying a useful light bag for my hiking trips. I ran into Leuk and Lili around noon and we had a light lunch in a supermarket food mall. Here one Hong Kong dollar could get P6.3 and 1 RMB for over P7!

I got back to the hotel before 3:30pm amidst heavy traffic. I texted to Lili warning them about the traffic jam and suggested them walk. They got my message in time and walked in the hotel just before 4pm. We took a taxi to the airport which took 30 minutes. Our flight departed on time and we arrived home around 11pm. My brother Lawrence and his wife Sally also prepared noodles, wanton and vegetables for us! A wonderful trip with a happy ending!