I left London on September 13, 2010 and have been on the road since. Last fall, I suddenly had the urge for a revisit to see my 86-year-old godmother and friends. I was on a happy memory lane during my stay in the UK.

My Cathay Pacific flight left Hong Kong before 10am. The time difference between Hong Kong and London is 8 hours and I arrived at Heathrow Airport at 2:30pm.

I have left the UK too long and forget how poor the airport facilities are as compared with the Hong Kong airport which provides free Wi-Fi service. I have stored phone numbers on Skype as I often call home and friends when I am on the road. As there is no Wi-Fi at Heathrow Airport, I could not retrieve the phone number of my godmother, Mrs. Thorn while awaiting a bus at the Central Bus Station. My bus finally left at 4:20pm and I arrived at her doorstep at 8pm. 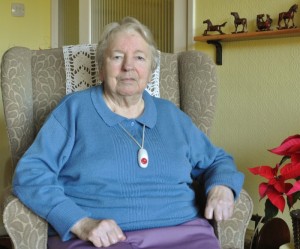 Mrs. Thorn was so relieved to see me. She had made a mistake thinking I would be arriving the day before. She waited anxiously till midnight and thought I had gone astray! I worked for Mrs. Thorn’s family as a domestic helper when I was 13. In those days, child labour was not uncommon. When my mother was sick and could no longer work, I took her place and worked for the family for a couple of years while studying in the evening.  Mrs. Thorn and her husband who passed away 11 years ago have taught me English and lots of things during a difficult period of my life. They have always called me their Chinese daughter.

I respect them and am most thankful for their guidance and concern. I have stayed in touch with them since they returned to live in the UK in earlier 80s. Mrs. Thorn is now living by herself and has problems with walking. Her neighbours help her with shopping and she goes out only three times a month. I am glad she is in good form and remains cheerful.

It had stopped snowing and the weather improved.  When I had lunch with Gary Li at a golf club nearby, I was thrilled to see the lovely snow-white country side of Somerset against a blue sky. I have known Gary and many Chinese community leaders while working in London. After lunch I spent the afternoon in the city centre sorting out my bank accounts which have been inactive for over two years. I spent a long time looking for Wi-Fi service. The public library charges a pound twenty pence for 20 minutes. The only place providing free Wi-Fi access is Starbuck!  As I had left my money in the flat, I could not pay for a coffee and use the free service. These days, I am dependent on free Wi-Fi service which enables me to stay in touch with my family and friends.

I had a relaxing time in Taunton. Mrs. Thorn and I sat in the sitting room most of the time. I updated her about my retirement life and travel, my two brothers and their family. Though I did not have jet-lag, I somehow felt tired and went to bed at 8pm!

I left Taunton after lunch. When Mrs. Thorn asked me when I would return, an idea suddenly popped up. “I shall be back to celebrate your 90th birthday,” I replied. So I now have a date with my godmother which I will keep. 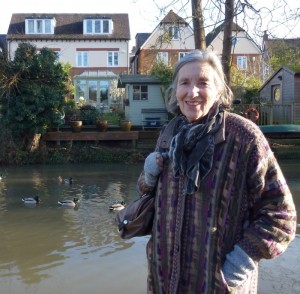 Margaret in front of her house

My next stop is Oxford to visit Margaret and Steuart Webb-Johnson. My bus left Taunton at 1:10pm and I changed bus at the Central Bus Station at Heathrow Airport at 4:50pm. I arrived at Thornhill Bus Station at 6pm and was delighted to see Steuart, my former boss. He has retired since 1992.

Steuart and his wife Margaret have always been very kind to me. I first came to know Steuart when I went to Oxford in 1979. There were eight colleagues (namely Agnes Choi, Alex Fong, KC Kwok Stephen Lam, CM Leung, Frankie Lui, Arthur Ng and Paul Tang) on the oxford course. Steuart was like a guardian taking us to visit public/government organisations and museums in the UK and Europe. He opened my eyes to the European culture and life. Then I worked as one of his deputies in Brussels from 1987 to 1990. I have learnt so much under his tutelage.

They have moved to a beautiful and cozy house in Oxford. Margaret likes gardening and is a great home-maker. She prepared a lovely chicken and I enjoyed my dinner with them and Amanda, their daughter whom I have known since 1979.

I woke up early in the morning. It was raining very heavily during the night and the ground was still very wet. The sun rays were breaking through clouds. Some ducks were paddling on the canal in front of the garden while a few joggers were running on the other side of the canal. Margaret is health conscious and we had a healthy breakfast with fruit, yogurt, tea and cereal.  I played with their grand-daughter Kira who will be 6 years old soon. She is a cheerful and lovely child.

We had a walk along the canal and came out near Nuffield College. I was once again on a memory lane. Oxford has changed a lot. There are many new colleges, malls and restaurants. It looks busy with lots of tourists as well as students. After a nice dim-sum lunch, Steuart took me to see an exhibition “Threads of Silk and Gold: Ornamental Textiles from Meiji Japan” at the Ashmolean Museum. It is a superb exhibition with exceptionally outstanding exhibits including paintings on silk and embroidery. I have never seen such exquisite masterpieces and find the Japanese craftsmanship and aesthetic achievements in many ways more superior than the Chinese.

In the evening, we went to Hong Kong House in Summer Town for dinner with Kira and Amanda. The owner came from Hong Kong and the food is excellent and very reasonable!

I took the 9:30am bus to London and then the tube from Baker Street station to Green Park. I arrived at the Hong Kong Office at Grafton Street shortly after 11am. It’s great to see my former colleagues and I took them out for a reunion lunch at Super Star. A couple of colleagues including my driver Ming who have retired also joined. I appreciate their support and hard work which have made my job so much easier and enjoyable.

As there was an event on Hong Kong that evening, I went along and managed to see many old friends and work contacts.  I finally reached Emily’s house at South Kensington at 9:30pm.

For the next three days, I spent most of my time doing my website and meeting friends.  Though I did not have time for cultural performances, I did spend some time in museums.

On January 29, I visited the Islington Chinese Association run by Kathy Blair and Stephen Ng. They have done an outstanding job looking after hundreds of overseas Chinese elderly people in the area. Then I took a bus to King’s Cross to look at the ongoing massive redevelopment. I stopped by British Library and the new campus of Central St Martin before arriving at British Museum. It was after 4pm and I only managed to see an exhibition on arts on Africa and the section on China and India. As I have learnt more about Buddhism during my travel in the past 28 months, I appreciate the beautiful sculptures even more.  Also the illustrations are excellent enabling museum visitors to gain better understanding on the exhibits. Emily prepared an excellent Chinese dinner with steam chicken with ginger and oil sauce, fried prawns and stir-fry vegetables.

On January 30, I had lunch with Eric Ho, Nigel and Ella Shipman and Emily in a Vietnamese restaurant in Putney. Eric was the Secretary of Social Services and Nigel a Principal Assistant Secretary when I reported for my first job in the Social Services Branch in October 1978. Eric is 85 now and looks well. 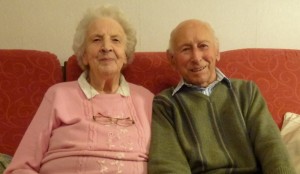 After lunch, I took a train to Chichester to see Kay (Mrs. Thorn’s younger sister) and Vince who had a major operation last year. Vince has recovered well and still sings in the church choir. As I had to take the 7pm train back to London, I left after spending two hours with them. Kay showed me pictures they had taken with me and my father during their visit to Hong Kong in 1992. She took a photo of my father from the album and asked me to keep it.

On January 31, I had lunch with Robert Upton (a former colleague). He deals with planning matters and remains as serious as ever. I had tea with Betty Yao, a curator of an interesting photo exhibition which will be shown in Hong Kong in November at the Maritime Museum. The photos were taken by a Scottish photographer Thompson in the 19th century.  After tea, I walked along the Sloane Square and King’s Road and went to Saatchi Gallery to see some modern art installations, paintings and photos. In the book shop, I saw two books on Hong Kong artists. 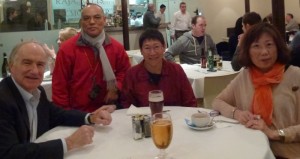 In the evening, Kathy and Bill took me to a fish and chip restaurant near Barbican Centre. It is a nice local eatery that is frequented by drivers as well as professionals from the City. I enjoy the ambiance and had a huge plate of fish and chips.

On my last day, I met Clinton Leeks (another colleague) for a quick noodle lunch near his office in Victoria. He looks great and enthusiastic about his work on UK’s new high-speed rail. I hope this project will take off bringing UK into a high-speed rail era. I was tempted to go to Tate Britain at the Embankment (not far from Victoria). As I was carrying my suitcase, I decided to take a bus to Luton and spend a quiet afternoon at Ibis Hotel by the airport.

I arrived at the hotel from 4:30pm and had a good rest. I got up at 5am the following morning and departed for Malta at 6:50am.

London is one of my favourite world cities. I always enjoy strolling aimlessly along the old streets and canals. Redevelopment has given many old parts of London a facelift. My brief visit to British Museum after wandering around so many museums in the past 28 months makes me realize how well the Brits have been preserving the invaluable treasures. They also provide good illustrations.

I find London smarter after the Olympic Games last year and prosperous. But I was told that the economy in other parts of the UK is not doing well. Many worry about jobs and the economy.

I have not done much during this trip. But my time is well spent. I would like to thank Mrs. Thorn, Margaret and Steuart and Emily for letting me stay with them and their nice home cooking. I have been taken out for lunch and dinner by my good friends and I hope to reciprocate one day. In any case, I shall visit the UK and hold a party for my godmother on her 90th birthday in December 2015.

Posted under My Europe trips
Comments (0)