I could have joined a 2-day tour to Putuo Shan for about 270yuan. But I hate to get up at 5am in order to arrive at the meeting place at 6:30am. Instead, I made my own way taking a bus from South Bus Station at 9am (47yuan). I was lucky to meet two men on the bus who were heading the same way. One of them has been there several times and knows the way.  They gave me a lift to the speed boat ferry terminal at Shenjiamen沈家門.

Putuo Shan is a small island lying on the Eastern Sea of China 5km east of the Zhoushan舟山 in Zhejiang province.  I paid 30yuan for the ten-minute ride to the island. Putuo Shan is considered the bodhimanda of Avalokitesvara (a revered Bodhisattva commonly known as Guan Yin 觀音 in East Asia and often known in English as the Goddess of Mercy).  During the Tang Dynasty, along with the development of the sea Silk Road, Putuo Shan became the center of Chinese Buddhism for Guan Yin. Every year on February 19th, June 19th and September 19th of the lunar calendar, it welcomes millions of Buddhists for the celebration of the birth of Guan Yin, being a monk and being a Bodhisattva. There are some XXX temples on this small island with an area of about 12.5 square kilometres with the highest point at 297m.

At noon, I finally arrived in Putuo Shan and had to pay an entrance fee of 140yuan.  After having some noodles with vegetables, I followed my friends and took a bus (10yuan) to the ropeway bus stop. To save time, he suggested us take a ropeway (30yuan one-way) to the top.  I visited three temples in the afternoon.

Huiji Monastery 慧济禅寺is located near the top of Fodingshan. It was misty and rainy. The monastery though small is atmospheric. This is where the Chan Master Yinyuan Longqi who arrived in Putuo Shan in 1612 stayed.

Fayu Temple 法雨禅寺is located at the foothill of Fodingshan.  The temple complex is huge, tranquil and peaceful: the ground is all covered with old trees and bamboos. I followed the well-paved and beautiful path. I only saw a monk and one visitor on my way to this temple. The air was fresh and crisp.  The monks were praying in the Guan Yin Hall which has with a beautiful and elegant gold statute of Guan Yin.  I was captivated by the atmosphere and stayed in the hall watching the pious monks praying and chanting for half an hour.

Dazhang Temple is on the main road to the pier. I decided to walk instead of taking the bus. The temple looks old and is under renovation.  A kind monk suggested me have dinner which is normally served around 4pm.  I declined as I wanted reach Puyi Temple 普济禅寺 which is about 1km away before dark.

I caught sight of a headland with a pavilion and decided to make a side trip. I was alone and was scared.  There is not much to see and I was alone and scared. I arrived at Puyi Temple after 5pm.  I heard beautiful chanting coming from the main hall which was lit up with over 50 monks praying in front of three exquisitely beautiful Buddha statues.  I watched the ritual with respect and later joined the monks walking around the hall for some ten minutes. I do not know the meaning of the chanting nor the ritual. But I felt good, peaceful and spiritually cleansed.

It was 6pm when I left the main hall to look for a place to stay. I found a couple of hotels nearby including a four-star hotel that charged over 500yuan for a single. I took a 3-star hotel which charged 250yaun for a basic room (The marked price was 980yuan). It is a grip-off!

I intended to attend the morning praying at Puyi Temple which begins at 3:30am. I could not as I had not registered with the temple the day before. In any case, I did not get up till 6:30am.

I packed and set off at 7:30am. My first stop was Puyi Temple. The Sea Stamp Pad 海印池 in front of the temple is most picturesque with three bridges and an octagonal pavilion. There were few visitors and I had the whole place to myself. I spent over an hour visiting the halls in the temple.

My second stop was the Thousand Step Beach which has a pavilion in the middle of the beach. I made a side trip to South Sky Gate 南天門 which is a natural gate formed by three huge boulders at the southern tip of the island. On a clear day, one can have a fantastic view of Hundred Step Beach and the South China Sea and the 33-m high Guan Yin Statute located in Zizhulin 紫竹林 (meaning the “Purple Bamboos Grove”). But it was a grey day with low visibility and could hardly see the statute. 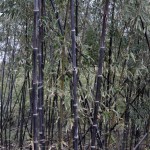 My final stop was Zizhulin which has two clusters of attractions. As the weather had improved, hundreds of tourists / pilgrims began to arrive.

The first cluster includes “Refuse-to-go” Guan Yin Temple不肯去观音院 which has similar architecture of the temples I saw in Shikoku last December and Chao Yindong 潮音洞. I listened to the flows and ebbs of tides: the sound is beautiful and most soothing. I also discover the connection of a pilgrimage route of 33 Guan Yin temples in Japan which origin can be traced to this temple. I hope to visit these 33 temples in Japan one day.

The focal point of the second cluster is the 33-m high Guan Yin Statute, the icon of Putuo Shan. There is also a footprint of Guan Yin. Legend has it that Guan Yin first landed the island at this point and left the huge footprint on a rock.

I walked another 750m and reached the pier. It was not yet 12:30pm. A man came up and said I could return to Ningbo for 85yuan. It was reasonable and I went with 12 other passengers in a minivan back to Ningbo.  While I was in Putuo Shan, I came up with the idea of visiting Jiuhua Shan which is not too far from Ningbo.

I was dropped off at the train station and discovered that I could either take a direct bus or a train. Both options have their drawbacks. The direct bus to Jiuhua Shan leaves every day at 7:30am from the long-distance bus terminal far away from the city and takes about ten hours.  The train departs at 12:37pm but goes only to Zizhou which is still an hour away from Jiuhua Shan.  As the weather was unstable with heavy snowfall in some parts of the region, I decided to take the train though I do not like arriving in Zizhou after 11pm. I brought a ticket for the following day for 87yuan.

As it was too early to return to the hotel, I took a bus to Tianyi Square 天一廣場. There are numerous skyscrapers, 5-star hotels and posh shopping malls. I found a large Tesco which seems to be doing well with long queues of shoppers.

It was raining, cold and miserable. There was no taxi and the only option was to take a bus. But I had no clue where to find the bus.  Finally I went to Shangri-La Hotel (run by a HK hotel group) to ask for direction. It was after 7pm when I was back in Incity Mall. I went to Grandmother Restaurant again and had a delicious dinner for 50 yuan. I was relieved to be to Hotel Ibis and had a good sleep.

Nothing worked as planned. I have read about Asoka Temple and was keen to visit it before leaving Ningbo. I found Bus 758 at Ningbo Train Station which goes to the Asoka Temple. I therefore decided to take my suitcase with me and make a quick trip. I arrived at the temple at 10:15am. As soon as I stepped into the complex, I was so attracted by its tranquility and atmosphere that I decided to stay on instead of rushing back to the train station for my train to Zizhou. I made the right decision.

Standing at the foot of Yuwang and Mount Mao, the temple built in 282 AD is one of the five mountains honoured by the Chan Sect 禪宗 (Zen Buddhism) in China and has over 100 monks. The temple is grand in size comprising some 600 halls, pavilions and towers. The Grand Hall was rebuilt during the reign of Emperor Kangxi of the Qing Dynasty (1661-1911). The Sarira Hall was established in 1678 with double eaves and yellow glazed tile coping. The stupa with Sakyamuni’s Sarira, inside a most impressive and solemn hall are four cornered and five storied, carved with Buddha figures on each.  A monk told me that Sakyamuni’s bone is stored in the library and requires special permission from the abbot to visit.

The temple also houses 58 carved stone inscriptions and steles from the Tang to the modern times. I also went to see 500 Louhan (Arahats) in an impressive old hall. Visitors are advised not to speak and disturb their Zen sessions. I like this temple as the whole place is spiritual, atmospheric and very quiet.

I planned to take a bus to Tiantong Temple located 25km to the east of Ningbo at the foot of Tiantong Mountain and 12km from Asoka Temple. I met six ladies at the doorstep of Asoka Temple on my way out. They were on a 2-day pilgrimage tour in a private minivan. The leader offered me a lift. I was lucky and fully appreciate their generosity. But I felt embarrassed as they had to squash and the leader had to put her feet up in order to provide space for my luggage.

Built in 300 AD, Tiantong Temple is an important temple of the Linji Sect whose root can be traced to Jinshan, Hangzhou. It is one of the five important Chinese Chan Buddhist School Mountains and is often referred to as the “Dongna Foguo 東南佛國 “(Buddhist Country in Southeast China).

Tiantong Temple also plays an important role in the cultural exchanges between China and Japan as it is considered the father of Soto in Japan.  During the South Song Dynasty, Daoyuan, a Japanese monk came to Ningbo and became a disciple of Venerable Master Rujing at Tiantong Temple studying the teaching of the Caodong Sect. Upon his return to Japan, he founded Yongping Temple and started the Japanese sect of Caodong Buddhism which has 8 million disciples and 33,000 temples today. In 1980, the abbot of Yongping Temple led a team of monks to Tiantong Temple and dedicated the temple a tablet inscribed with words to the effect of “Tablet in memory of Japan’s Zen Master Daoyuan for his attainment of enlightenment in Tiantong Chan Temple”.

I arrived in Tiantong Temple around 1:30pm.  A monk in his late 40s kindly permitted me to leave my luggage in his room so that I could stroll around the complex without burden. Around 2:30pm I heard chanting coming from the main hall. I went in and watching over 50 monks performing a ritual different from what I had seen in Putuo Shan. At the end of the ceremony, the six ladies whom I met before had blessings from the abbot. I am not a Buddhist and do not know what was going on.  The leader also told me to look for a monk in Zhiyuan Temple in Jiuhua Shan.

At 4pm, I took a bus to Ningbo East Bus Station. Then I had to take another bus to the long distance bus station where the bus to Jiuhua Shan would depart the following morning. I did not get there till 7pm! I brought a ticket for 170yuan and stayed in a hotel next to the station. What a wonderful day full of nice surprises!