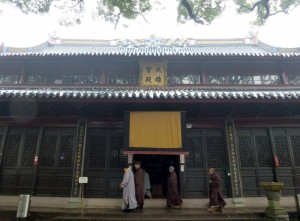 I have been Ermei Shan 峨嵋山and Wuitai Shan 五台山 and always want to visit the remaining two sacred Buddhist Mountains namely Putuo Shan普陀山 and Jiuhua Shan 九華山. I flied to Ningbo寧波and visited Putuo Shan and two famous temples of the Chan sect of Chinese Buddhism.  I then travelled by bus to Jiuhau Shan. Finally I took the new high-speed railway from Nanjing to Beijing. I had an interesting 3000-km overland journey in China.

I flied with Dragon Air and arrived in Ningbo at 1:30pm. Located in the northeast of Zhejiang province, Ningbo is the second largest seaport in China with a population of 7.6 million (2010 census).

It was snowing in Ningbo and everything was white and covered in snow. I booked a room with Hotel Ibis (a French hotel chain) the day before. The hotel is very nice and comfortable though it is fairly far from the city centre.

It was almost 3pm when I was ready to go out. As it got dark early, I decided to go to the new Incity Mall close to the hotel. I am not a shopper but enjoy window-shopping to see what’s in fashion and the general outlook of the city and people.  I was surprised at the range of shops, restaurants and the supermarket, all of which are modern and stylish with Chinese brand names.  I had an amazingly nice dinner at Grandmother Restaurant with its distinctive stylish decoration.  The food is authentic and I hope one day it will open restaurants outside China. 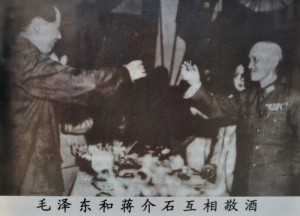 Chiang Kai-Shek 蔣介石, former President of the Republic of China, was born in Xihou溪口, close to Ningbo. I was told to get a bus from South Bus Station to Fenghua 奉化 where there is a local bus to Xihou. (There is actually a direct bus to Xihou direct for 16yuan from the same station). I left my hotel around 9am but did not arrive in Xihou till 12noon. A private car might only take an hour or so from the hotel to Xihou.  (It would be better to hire a car for a day to visit this town and other attractions in the city)

A tricycle driver came up to me at Xihou Bus Station. He was desperate for business as there were few tourists on such a cold and wet day. He offered to take me to the “Compound Occupying by Many Families” (which is a museum with exhibits from 1911 to 1949) for 5 yuan. The journey took less than ten minutes.

I spent over an hour having a quick glimpse of the exhibits. The period from 1911 to 1949 is one of the most important and tumultuous periods in our history.  The Qing Dynasty was overthrown in 1911 and the Republic of China was established with Sun Zhong-shan孫中山 as the first President in Nangjing xx. Chiang rose to power after Sun’s death in 1925. There was no peace: China was ruled by warlords and was embroiled in a civil war between Chiang’s government and the communists. The aggressive Japanese began invading China in 1930s and China was fighting the Japanese till the end of the Second World War. In 1949, the communists defeated Chiang’s government which fled to Taiwan. The People’s Republic of China was established on October 1, 1949. I saw some interesting photos including a couple with Chiang Kai-shek and Chairman Mao 毛澤東.  The illustrations are fairly factual without propagandist remarks. 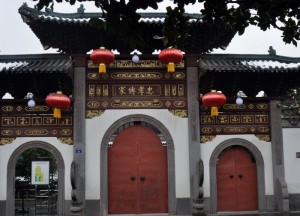 Then the driver offered to take me on a tour to other attractions for the afternoon for 50 yuan. I wanted to help him and agreed. He first took me to a shabby local eatery for a hot noodle soup as I was hungry.   Then the driver showed me the Wenchang Villa and the Little Western – style House which was resided by Chiang Ching-kuo 蔣經國and his Russian wife on return from Russia. I wanted to go in but he said it would cost 120 yuan for a combined ticket and there was “nothing to see”.  We passed Wuling Gate, the Ancestral Hall of the Chiang Clan, Fenghao House (which was inhabited by Chiang’s family), Yutai Salt Shop where he was born and finally Xihou Museum.  All these attractions are on the main street along the river opposite the first museum I visited. I would probably take less than 10 minutes to walk from Wenchang Villa to Xihou Museum and there’s no need for a ride at all.

It was not yet 3pm and I was not ready to return to Ningbo. As a professional tourist, I am eager to see the main attractions associated with Chiang in his birthplace to determine whether it is worth visiting. The driver must think I am crazy!

The driver reluctantly took me back to the tourist service centre outside Wuling Gate. I got my ticket and spent almost two hours visiting Yutai Salt Shop where he was born, the Ancestral Hall which traces the root of the family and Chiang Kai-shek’s large house where his first wife was killed during bombing by the Japanese. Chiang came from a rich family and had four wives and two concubines. In the Western-style House, there is an inscription “blood for blood” in red written by Chiang Ching-kuo when his mother was killed by the Japanese. The Xihou Museum is totally new and has a large section on Chiang Kai-shek with positive review and remarks on Chiang as one of the greatest men in modern Chinese history that supports a unified China.  The illustrations reflect the policy and attitude of the Central Government towards Taiwan today.  There is no more harsh word:  the bitter feeling and enmity of the past seem to have gone.

I admit there is not much to see inside the restored residence of Chiang and his son. But it is still worthwhile to be in the room and see the bed where he was born in Yutai Salt Shop and the ancestral hall. The driver took me to the bus station at 4:40pm and I was back in Ningbo around 5:30pm. It was dark and cold. I took a bus to Incity Mall and had roast lamb in Grandmother Restaurant.  The meat is nice but does not taste like lamb! I paid 70yuan and this is the most expensive meal of my whole trip!

Posted under My China trips
Comments (1)