England can be wonderfully warm and sunny in the summer with clear blue sky and manicured gardens, meadows and green fields. Before joining my dream trip to the North Pole, I had a nice and relaxing time with friends in the UK.

I had a pleasant transit at the new Madrid airport and arrived in London at 3pm. I took the Heathrow Express to Paddington (£34 return): the journey takes only 15 minutes. I reached the YHA near Great Portland Underground station and am surprise at the high standard and facilities. The building is fairly new with modern facilities. The rooms are comfortable with air-conditioning. The communal facilities are very clean and the staff are helpful. I have fond memories of my days in various YHAs during my stay in the UK in 1979-80. I had a leisure stroll in this lovely area before finding a nice hair stylist to cut my hair. I am pleased with my new look! I had an excellent sleep.

Today, I moved to a B&B next to the Paddington station which I had booked a while ago. When I discovered that I would be arriving in London on June 9 instead of 10, I tried to book one more night on June 9. But it was full and I had to spend one night at the YHA which turns out to be a nice surprise.

I had a leisure day preparing my travel notes before joining Emily at 8pm for a lobster dinner in Queensway. We had a big lobster served with noodles in Chinese style. We had a delicious dinner and did not leave the restaurant till 11pm!

I enjoy working with the local staff in the Brussels, New York and London Offices. Daisy, my former secretary kindly helped me arrange a lunch at Super Star in China Town. The dim-sum, roast duck and fried fish are excellent. I am glad to see them again and treat them with a nice lunch. 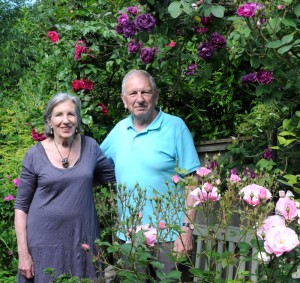 After lunch, I made my way to Oxford to visit Margaret and Steuart (my boss in Brussels). The bus journey took about two hours. It was winter when I last visited them. Their garden now looks beautiful with roses and all sorts of flowers blossoming. Margaret had prepared a nice dinner with baked salmon and fresh salad. We had the dinner in the garden. I also had a wonderful sleep as my bedroom facing the canal is quiet and cool.June 13 Friday: Oxford – London

After breakfast, Steuart and I had a walking tour in Oxford and visited some of the oldest colleges. I was at St Anne’s College in 1979-80 and have been back many times since. But each time I walk through the old alleys and look at the beautiful architectures, I cannot stop admiring this timeless university town which is awesome and inspiring.  We had a lovely lunch at the oldest pub before Steuart dropped me off at the bus station. 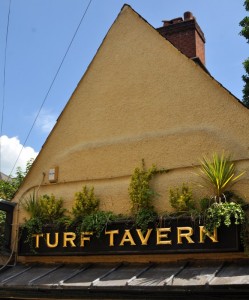 I took the 1:40pm bus to London before catching the District Line train to Upney. Victoria, my roommate during the trip from Guatemala to Belize, picked me up from the station around 4:30pm. We returned to the station to pick up Emma (another participant on the same trip) half an hour later. Victory has a lovely house with her own art studio at the back of the garden. She prepared a fantastic cocktail with strawberries and we had salmon and prawns for dinner. I listened with great interest their trip from Belize to Mexico City. Apparently, they had many long driving days and a great time in Mexico visiting Aztec ruins and some colonial cities.  I also told me about my boat trip from Panama to Colombia and my interesting stay in Bogota. It’s midnight before Victoria and I went to bed!

Victoria dropped me off at the Upney station just before 10:30am. I waited for only a few minutes before the train arrived. At 12noon, I arrived at Richmond and met up Sue and Brian whom I met on the cruise from St Petersburg to Moscow last summer. We walked through the city centre before arriving at the bridge over the famous River Thames. As it was drizzling and chilly, we had to have our coffee indoor. Fortunately, the weather cleared up and we moved outside to enjoy the view and fresh air.

I visited their lovely home nearby and spent the rest of the afternoon basking in the sun in their garden. We had a lot to catch up and their son was getting married on June 20. I appreciate their interest in my travel and my website. At 3:30pm, they took me to the Central Bus Station at Heathrow where I caught the 4:40pm bus to Taunton. 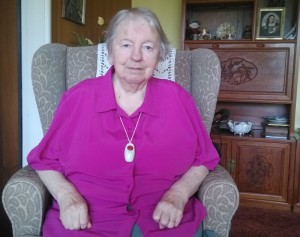 I finally reached my godmother’s flat before 9pm. She will be 89 this December: she looks happy and good (though she has to take some 20 pills a day!)

I had a rest day and only ventured out briefly to use free Wi-Fi at Starbuck and to buy a roast chicken for lunch at Tesco. We had a lovely Sunday lunch. Time passed by quickly. Two of her neighbours dropped by for a chat. One gave Mrs. Thorn some strawberries from her garden and fresh cream. I had most delicious strawberries and cream for supper! 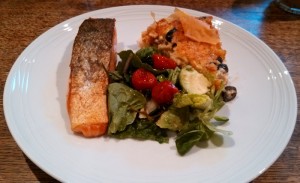 I chatted with Mrs. Thorn till noon. On my way to the station, I brought fish and chips for lunch. My bus left Taunton at 1pm and I was back in London shortly after 4pm. I found my way to Emily’s place near High Street Kensington and had a lovely dinner with salmon and quiche.  Her sons, Anson and Alvin are clever and enterprising. Anson helped me download pictures in my smartphone to my computer too. I can finally select some of them to upload to my website.

I had lunch with Robert (a former colleague who left Hong Kong before 1997) in a Hungarian restaurant in Greek Street. Before lunch, I queued up at the Leicester Square ticket booth to get tickets for a show. I find the price for most of the musicals too expensive. Anyway, I have seen most of the musicals in town. Then I discovered an interesting programme at Sadler’s Wells entitled ‘Sadler’s Sampled Extras’. I brought two tickets at seats in the First Circle for £33. Good value!

The performance tonight was ‘Swan Lake’ choreographed by Dada Masilo, a South African.  The fantastic performance lasted for an hour: the presentation is different and not conventional with amazing African flavours and vigor. I thanked Victoria for bringing me my camera which had been left at her house and was glad that she enjoyed the performance.  We had a nice dinner at Banana Tree. It was almost 10:30pm when we left the restaurant.

I have not seen a musical since retirement and find the musical ‘Bodyguard’ interesting. I had found out that unsold tickets at the first row would go for £25 at 10am at the box office. I arrived early and brought a ticket for the matinee.

I took the underground to meet up with Betty for lunch at Saatchi Gallery. Upon discovery of the glass negatives of photos taken by John Thomson in Wellcome Library’s collection several years ago, Betty has been instrumental in bringing his images of Hong Kong, China and Southeast Asian countries in the late 19th centuries to the US, the UK, Hong Kong and over ten cities in China. Thomson has been highly regarded as a serious pioneer of photojournalism. The 3-month long photo exhibition ‘Through the Lens of John Thomson: Hong Kong and Coastal China (1868-1872)’ presented by Maritime Museum in Hong Kong from November 23 to February 16, 2014,has been successful attracting over 15,000 visitors.

I find the musical ‘Bodyguard’ more like a drama. As I was seated in the first row, I had a close look at the performers. But it was too close and the music was too loud. On reflection, I might have a more enjoyable experience by taking a cheap seat at the back!

My last commitment in London was a dinner with Katy and Stephen at 7pm in an Italian restaurant in Lamb Conduit Street (WC1N). I decided to return to my hotel after the musical to drop off the two pairs of shoe brought in the morning. What a mistake!

The underground to Paddington station was delayed: I did not get back to my B&B in Paddington till almost 6:30pm. Then I was misled by the staff at the Paddington underground station: he told to go the Liverpool Street station.  While I was on my way, a girl sitting next to me let me use her mobile to call Katy and Stephen to inform them I would be late. They did not hear the phone ringing. Then I called the restaurant and the line was cut half way when the train was underground. When I arrived at the Liverpool Street Station, the station staff told me that I was at the wrong station. They suggested me get out to find a public phone. I paid 60p to place a call to Katy who told me to hop back on the underground and get off at Russell Square.

I finally arrived at the restaurant at 8pm. I felt ashamed as I had lived in London for over four years: I should have checked the address and postal code when I had free Wi-Fi access to look at Google map. The information provided by the underground station staff is totally inaccurate!

I was introduced to Daphne and Kenneth who are both lawyers working in London. The food arrived and I had nice pasta with seafood. It is a very popular restaurant. We had to leave the table at 8:30pm. Katy then took us to the Renaissance Hotel at King’s Cross for dessert and coffee. The hotel is next to the Euro-star terminal and has been beautifully restored after 20 years’ work. The architecture and ambience are awesome. We had a cheerful time chatting about good old days as well as recent developments in Hong Kong (I confess I have lost touch as I can only read online newspapers while on the road). I did not lie down in my bed till midnight!

I got up before 6am, took the train around 7am and checked in at Heathrow before 8am. I had a nice breakfast at the airport lounge. Nowadays I do not mind going to the airport early if there is a nice lounge where I can relax and use Wi-Fi. The plane took off on schedule at 10:20am and I arrived at Helsinki at 3:30pm (local time).

London is one of my favorite cities. I find it dynamic with old and modern architectures, culture, history and business all blending in beautifully. Its lively, creative and amazing ambience is enchanting and magnetic. The weather has been good and I had a perfect relaxing holiday doing nothing but meeting old friends. I cannot thank Emily, Margaret and Steuart, Victoria, Sue and Brian, Betty, Katy and Stephen enough for their hospitality. I hope to have a chance to entertain them in Hong Kong.  Mrs. Thorn, my godmother will be 90 years-old in December 2015. This provides a convenient excuse to visit London again!

Posted under My Europe trips
Comments (2)