We were back in Isla Santiago again and landed at Puerto Egas with fine black sand. I shall remember this place for its black basalt rock sculptured like landscape with arches, blow holes and black sand beaches. Here I see reddish marine iguanas for the first time. I also saw an American oystercatcher with a stout red bill and orange-yellow eyes, a whimbrel and some semi-palmated plovers on rocks along the beach. Many fur seals and sea lions were resting on the beach.

The morning snorkel at Puerto Egas was excellent- the best one I had on this trip. The water was nice and warm and there were millions of fish of all sorts. I saw half a dozen of sharks and huge sting rays. A playful sea lion swam around the biggest school of fish I have ever seen for over 15 minutes. I wish I had an underwater camera to capture this magical moment.

After lunch, the boat moved to Isla Rábida where we had our last snorkel and land excursion on this trip. The water was warm but there was nothing special.

In the afternoon, we had a walk on Isla Rábida which has a dark-red sand beach due to its high iron-oxide content. There were a few sea lions on the beach. The boat moored off Isla Santa Cruz.

We got up early as usual and the boat took us to see Isla Daphne which has a huge crater with abundant bird life. We got off Floreana at 8am and were taken to the airport. Eight people returned to the mainland while seven of us stayed on in Galápagos.

It took me over two hours to get back to Puerto Ayora, Santa Cruz. I had to wait four hours for a boat to Isla San Cristóbal. The one-way fare is $30. I arrived at Puerto Baquerizo Moreno around 5pm and found a basic room with air-conditioning for $35 a day. 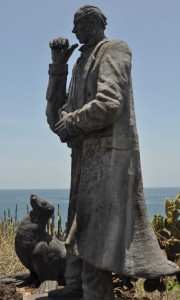 I find Puerto Baquerizo Moreno appealing. There is no big hotel or building more than 3-storey tall. Its laid-back atmosphere reminds me of some islands in Hong Kong. I booked a snorkel trip to León Dormido for $80 and had a grilled grouper in San Jose restaurant for $10. It is the best fish I had so far on this trip!

There were 12 tourists on the speedy boat to León Dormido (Sleeping Lion) which arises from the sea. The snorkel was not enjoyable: the sea was covered with jelly fish and I was badly bitten though I already had a short wet-suit on. Also it was a cloudy day with intermittent rain. As a result, visibility was poor. The sheer drop around the rock cliff looks frightening. I did see a couple of turtles and large eagle rays while others spotted sharks. The snorkel should be fascinating in a fine day.

About 1pm, the boat dropped anchor in Puerto Grande for a swim. The boat arrived at Puerto Baquerizo Moreno at 3pm.

In the late afternoon, I strolled along the beach all the way to Playa Carola to watch sunset. It is a small world and I ran into people whom I met on the cruise and on the Machu Picchu trek. Hence I had a lovely farewell dinner with Nick, Phil, Sophie and Katherine (2 young students from Denmark) in San Jose Restaurant.

It was a hot day and I had an umbrella.  After visiting the Galápagos National Park Visitor Centre which has good display on the natural history and development on the islands, I had a leisure stroll on well-paved paths leading to several look-out points. I had fantastic views of the town and León Dormido.

My boat left the port at 3:30pm and I was in Puerto Ayora for the third time shortly after 5pm. I found a hotel close to the port and had nice spicy pasta in an Italian restaurant. The food and wine is reasonable ($19) but the 22% tax is terrible.

It was a hot day and I had a relaxing day. I made a side trip to Las Grietas, a favourite spot for the locals on weekends. The water is nice and cool and people like to climb up the rocky cliff and jump into the water. I stopped in a bar on the way back to town and had a beer and lunch. The grilled chicken and pork were most delicious but I waited for over an hour! It was 5pm when I got back to the hotel. I returned to the kiosk for a grilled grouper for $20. The fish was nice, juicy and delicious.

Another travel day. The plane took off at 1pm and I was back in Quito after 6:30pm.

I have finally fulfilled my childhood dream and set foot on Galápagos. I am glad to have taken an 8-day cruise to see the northern islands. The time passed quickly and I had done a lot: 13 land excursions, 11 snorkel sessions and two sea excursions. Has the trip lived up to my expectations?

First, I am lucky and have been able to follow Darwin’s footsteps. Human activities have almost wiped out the giant tortoise population and have done serious damages to the natural habitat. Since the designation of the Galápagos archipelago as a World Heritage Site with emphasis on preservation and better management, remarkable improvements, according to our guide, have been made. This is welcoming development.

Second, it is a blessing to see this natural laboratory. Each island is unique. The topography and landscape of Isla Santiago as a whole and Sullivan Bay in particular, Isla Bartolomé and Las Tintoreras, Isla Genovesa, Isla Fernandina are impressive. Sullivan Bay, the Pinnacle Rock, Isla Rábida and Isla Sombrero Chino are photogenic.  The view of Isla Bartolomé at sunrise and the hike at Tagus Cove with a beautiful panoramic views of Isla Isabela at sunset are beautiful and memorable.

Third, the Galápagos archipelago generally lives up to its reputation as one of the paradises for wildlife. I am happy to see dozen of giant tortoises (unfortunately mainly in the reserves), countless sea lions, thousands of marine iguanas lying on black lava rocks, several marine iguanas feeding underwater and numerous sharks, penguins, rays and turtles in the water.  Bird-watching is most rewarding: I watched hundreds of brown pelicans, frigatebirds with red pouches, flightless cormorants, greater flamingos, Andean gulls, Galápagos doves, short-eared owls, finches, mockingbirds, blue-footed, red-footed and Nazca(masked) boobies.

In conclusion, I fully appreciate the opportunity to visit this unique part of the world. But I am afraid it does not have the ‘wow’ effect on me. Today’s Galapagos is a just another hot tourist destination. I am uncomfortable to notice the rapid tourism development and growth in Puerto Ayora, Puerto Baquerizo Moreno and Puerto Villamil. Uncontrolled growth could bring damages to the fragile eco-system and wildlife. I hope sensible plans which strike a balance of preservation and conservation of wildlife and economic development for the benefits of the people could be made and implemented. I do not wish to see Galapagos turning into a wildlife themed park!