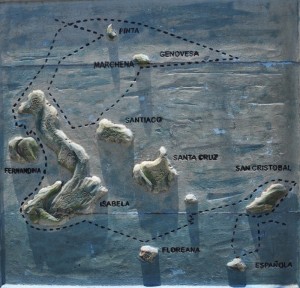 Charles Darwin’s visit to Galapagos in 1835

Galápagos, Ecuador has been made world famous since Charles Darwin’s visit in the 19th century. This natural laboratory is on the bucket list of scientists, globe trotters and nature lovers and on my wish list for half a century. I finally made my way to Ecuador to see Galápagos before joining a 47-day overland trip starting in Quito on March 25.

Ecuador is a small but fascinating country with rich cultural heritage and biodiversity. With only an area of 283,520km², it is one of the 17 megadiverse countries in the world and is considered the world’s most biodiverse country per unit area. The country is divided into four regions namely the Costa (coastal plain), Sierra (mountains), Oriente (the Amazon jungles) and Galápagos archipelago in the Pacific Ocean.

Recent discoveries have confirmed Ecuador’s rich archeological heritage. The oldest pottery in all of the Americas has been found on the coast in the Manabí province, Ecuador from the Valdivia culture (3800-1500BC).  Ancient trade links had been established between Ecuador, Mexico and Amazonia. The La Tolita culture (600BC-400AD) which reached its zenith around 300 BC was centred round the coastal province of Esmeraldas. Its finely crafted gold objects including the magnificent mask of the Sun God (the symbol of Ecuador’s Banco Central) have caught world attention since 1920s.  Outstanding objects in gold, silver, cotton textiles, pottery and stone from the Manta culture also been discovered in the modern province of Manabí. 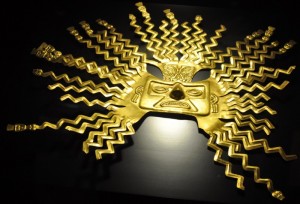 Inca came in the 15th century and modern day Ecuador became part of the Inca Empire from 1460 to 1534 AD.  Then the Spaniard arrived and ruled for the next three hundred years. Independence movements began in early 19th century and the first serious attempt led by Juan Pio Montúfar in Quito where was made on August 10, 1809. In 1922 Ecuador which was liberated by Símon Bolívar joined Venezuela and Colombia in forming Gran Colombia which lasted eight years. Ecuador finally gained full independence in 1830. But it has since lost a significant part of its territory to Peru and Colombia.

Like other countries in the continent, Ecuador had gone through a prolonged period of political instability with well over 100 presidents since independence. Despite continuous political upheavals, the country has avoided bloodshed and brutal rule by military juntas and achieved steady economic and social development.

Ecuador is not as rich in natural resources and economically developed as some countries in the continent. Discovery of oil in the Amazonian region has changed its fortune and brought an economic boom in the 1970s. Following the financial banking crisis in 1999, Ecuador adopted the US dollar as its legal tender on March 13, 2000. After a chaotic and painful adjustment period, Ecuador gradually got things under control and its economy has been growing steadily in recent years.

Today, oil accounts for 40% of its export followed by agricultural products including bananas, flowers, cocoa, sugar cane, rice, cotton, corn, palm and coffee. Tourism and timbering industries are also growing. The GDP (nominal) and GDP (PPP) for 2012 was estimated to be $84.53billion and $153billion respectively i.e. GDP (nominal) and GDP (PPP) per capita at $5,310 and $10,055 respectively.

Today, Ecuador has an estimated population of over 15 million.  According to the 2010 census, about 70% of the population is Mestizo. Other ethnic groups include the Montubio (7.4%), Afroecuadorian (7.2%), Amerindian (7%) and White (6%). The main spoken language is Spanish while 13 other languages including Quichua, Shuar are used in native communities. Catholicism is the predominant religion. Catholics.

Ecuador is rich in tourism resources with four World Heritage Sites. The star attraction is undoubtedly the Galápagos Islands. The other three sites include the Old Town in Quito which has the best preserved and least altered historic centre in Latin America; Cuenca which is an outstanding example of a planned, inland Spanish-style colonial city in the Americas and the Sangay National Park.

My plane from Cusco to Lima was delayed for over an hour. I spent another hour at the Lima airport before getting on a connecting flight to Quito. I finally arrived at the new Quito airport at 2pm. The taxi fare to the town centre is US$25 as the airport is 40km from the city. I checked in Hotel Carolina Monte Carlo on Reina Victoria in the Mariscal district around 4pm. The whole day had gone.

My hotel is close to Plaza Foch, a lively spot full of pubs, bars and eateries. There are many colourful old colonial mansions which have been turned into hostals/hotels. The pubs were full of young people. I had BBQ ribs in Magic Bean.

Quito, located at the24km from the equator and nestled at the foot of 4,696-m high Rucu Pichincha volcano, has a spring-like climate year-round. It is a green and attractive city with remarkable colonial architecture and sculpture of the colonial period and sleek contemporary architecture of post-independence days. Quito has more than 80 churches. The Old Town is a World Heritage Site with magnificent colonial buildings, old churches, convents and monasteries.

I did not do much during my brief stay in Quito. The weather was not good and it rained several times a day. Quito has taken me by surprise with an atmosphere different from other capitals in South America. First I discover it uses US dollar as its legal tender.   Second the city has an American feel. Third, the capital though has many old and run-down buildings and old-style trolleybuses, is well-organised with a relaxing feel. There are several parks in the city.

On Sunday, I overslept and even missed breakfast which finished at 9am. I had a long walk from the hotel along Av Amazonas to the Parque El Ejido (Communal Park) and saw the Casa de la Cultura and some sculptures in the park. I then arrived at the Observatorio Astronómico and Parque Alameda with a monument of the liberation leader Simón Bolívar with my first glimpse of the Old Town dominated by domes and spirals of churches. 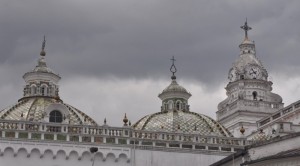 The Old Town has the best preserved and least altered historic centre in Latin America with splendid architecture. The Plaza de la Independence is the heart of the historic centre. It is planked by Palacio de Gobierno (Government Palace), Palacio Azobispal (the traditional residence of the archbishop from 1700), La Catedral Metroplitana and the City Hall.At the centre of the plaza is a monument celebrating Ecuador’s first declaration of independence in 1809. Many locals were hanging out in the plaza and some were singing. I had lunch in a fast food chain restaurant at Palacio Azobispal for a few dollars. The service is good and the food is decent.

It started to rain when I walked up to Iglesia La Merced constructed from 1700 to 1734. It has the tallest tower at 47m in the Old Town. This church with walls decorated with pink and white reliefs is unusual and beautiful. When I reached Plaza San Francisco, heavy rain poured down and I was wet. It was 4pm and I decided to return to the hotel. I took a trolleybus which costs only 25cents. In the evening, I had a steak in an Argentinian steak house.

Monday was a busy day. I spent almost the whole day looking for best last minute deal for a Galápagos cruise. It is not easy to find a perfect cruise which would be leaving at the right time with the best itinerary and best price. I finally picked an 8-day cruise on Floreana, a tourist economic class boat for US$1,525. After fixing my trip, I went to another agency to book a day trip to Cotopaxi for US$40. I had enough for today and returned to the hotel to work on my website

I arrived at the meeting point before 7am on Tuesday. But the minibus had to wait for other passengers did not leave till 7:30am. It was a cloudy day. By the time the minibus with seven passengers arrived at the Cotopaxi National Park, it was almost 10:30am. We began our hike at 4,600m, walked to a refugio at 4,850m and reached about 5,000m before descending. We could not go on as it would be unsafe to walk on snow and ice without crampons. I took a couple of photos of the snow-cladded peaks of Cotopaxi (5,900m). We were driving along the well-paved Pan-American Highway and the countryside is lush green.

We left around 1pm and had an option to ride a bike downhill to a lagoon about 10km away. The road in unpaved. I already had two mishaps (a knee injury and a dog bite) and did not want to take further risk. So I stayed in the minibus while five tourists had a fun time on the bumpy road. After a good lunch with soup and fish, we returned to the city. I was at Plaza Foch again at 3:30pm.

It started to rain again. I had an early night as I had to get up before 5:30am the following day to catch a flight to Galápago.

The Galápagos archipelago located 960km from the mainland comprises 13 major islands, six small ones and 42 islets.  All are of volcanic origin spreading about 80,000 km² including 1,350km coast-line. Its most famous visitor, Charles Darwin on board HMS Beagle developed his theory of natural selection and evolution in his classical work On the Origin of Species after visiting a few islands in the archipelago in 1835. I have this book sitting in dust in my bookcase for years!

From the late 16th century to the early 18th century, pirates used the islands as refuge and base for raids on the Spanish colonial ports. The first resident of the archipelago was Patrick Watkins, an Irishman in 1807. During the 19th century, the islands were a center of whaling activity. In 1832, Ecuador officially annexed Galápagos. Human activities had unfortunately done much damage here.  A significant number of giant tortoises were slaughtered or taken away for food and oil for street lamps. Animals such as cows, dogs, goats and pigs which had been brought were a threat to the natural habitat. The giant tortoise population on a few islands had been wiped out.

Every island is unique with its own topography, vegetation and species. Only four islands namely Isabela, Santa Cruz, San Cristóbal and Floreana are inhabited. Isabela is the largest island with an area of 4,600 km² while Santa Cruz is the second largest and most populous island with 10,000 inhabitants. Puerto Ayora is the largest city and port in Galápagos. About 6,000 people live in on San Cristóbal where Puerto Baquerizo Moreno, capital of the archipelago is located.

The archipelago is world famous for its wildlife especially its reptiles. Galápagos giant tortoises are the icon of Galápagos. Feeding on grasses, cacti and other succulent plants, they have long life. Reproduction begins around the age of 25. They reach maturity at the age of 100 and live beyond 160. The other famous reptile on the island is iguana which has a sinister look with a chunky head and a spiny backbone.

Marine life here is marvelous too. It is home for many types of sea turtles, rays, sea lions, seals, reef sharks, marine iguanas and a mix of tropical and temperate types of fish.

March 12 Wednesday: Quito – Galápagos (GMT – 6)The plane took off on time at 8:45am and had over an hour stop-over at Guayaquil. I arrived at Baltra airport at 12 noon. All foreigners have to pay US$100 entrance fee for the national park and another US$10 for airport tax. Last year, about 200,000 visitors came. There are over 80 boats of all classes.

Things are more expensive here. I stayed at Lava House, a B&B with 13 rooms. In the afternoon, I walked to the Charles Darwin Research Station which has a tortoise breeding centre and a visitor centre. I saw some giant ones and a couple of land iguanas. I am not impressed: the place requires better up-keeping. I went to a local place with dozen of kiosks and had fish and rice for $10.