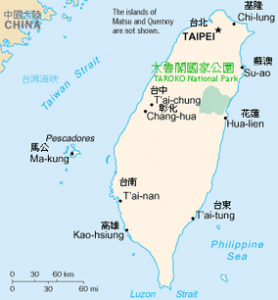 Taiwan台灣 is a popular destination especially when Hong Kong residents can apply visas online.  My good friend, Bertha who is a gourmand was going to Taipei 台北for her mom’s 92th birthday. I therefore spent a week with Bertha and her family in Taiwan. Food tasting naturally became the main theme of our trip. We also spent two days in the beautiful Taroko National Park 太魯閣國家公園.

It takes less than an hour and a half to fly to Taiwan. I arrived at the Taoyuan International Airport before 9:30am and was at the Mellowfield Hotel in the Tianmu District before noon. As Bertha and Cat had gone to Dharma Drum Mountain, I spent the afternoon sorting out photos taken in northern Xinjiang.

In the evening, Bertha’s brother who has been working and living in Taipei for over 30 years hosted a dinner at Osteria in the Zhongshan District which is filled with restaurants and boutiques. Bertha, her brother, cousin (Kathy) and niece (Jocelyn), Cat and I had six Italian dishes. My first wonderful meal!

Kathy was our trip planner. She organized a 3-day trip and arranged a 7-seater car. Taiwan though small has five mountain ranges running from northern to southern part of the island and with more than two hundred peaks over 3000m. The Central Mountain Range extending from Su-ao to the southern tip of the island serves as the island’s principal watershed. This area is home to many indigenous tribes including the Truku. A road was first built during the Japanese occupation in order to bring the area under control. The park with an area of 92,000 hectares is named after the marble Taroko Gorge and is famous for its lofty canyon landscapes. The Central Cross-Island Highway, an engineering showpiece now runs through the park.

Our group of five (Bertha, Cat, Kathy and Andres (her husband) and I) set off at 10am. We arrived in Su-ao, a seaport on the eastern coast for an early seafood lunch. Taiwan has a coastline of some 1560km with abundant supply of fresh seafood!

After lunch, we had a scenic drive along the spectacular coastal highway all the way to the Taroko National Park. We had an excellent driver and had a couple of photo stops. First, we had a panoramic view of Su-ao. Then we stopped to looking at the hanging cliffs which runs for some 20 kilometres along the coastal highway.

Like all tourists, we had a picture at the starting point of the Central Cross-Island Highway and entrance to the gorge and the park. The spectacular highway winds through the scenic gorge with rugged mountains, soaring peaks, seas of clouds, lush vegetation and swiftly flowing rivers. It reaches over 3200m at Wuling before descending to Taichung. Along the route, there are many famous sights including the tunnel of Nine Turns九曲洞, the Eternal Spring Shrine長春祠, Swallow Grotto燕子口, the Bridge of the Kind Mother慈母橋 and Tiansiang天祥. There are also many wonderful and well-maintained hiking trails. 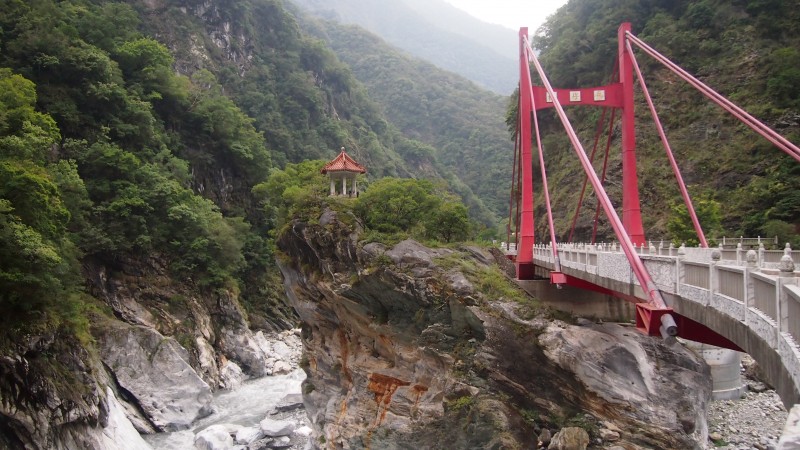 After visiting the Swallow Grotto, we came out of the park, drove south to Hualien花蓮 and went straight to Chez Chef Ming a famous restaurant which organic vegetables come from Chef Ming’s own farm. We had our second sumptuous meal with some ten dishes for less than New Taiwan $3500 (HK$100 to about NT$360)! Great value! The driver had to drive all the way back to the park as we stayed in the Silks Place Hotel in Tiansiang. We arrived at the hotel after 9:30pm.

Thanks to Bertha’s brother, we found an excellent 3-day package at the luxurious Silks Place Hotel. We had a lovely breakfast with freshly baked bread, orange juice, yogurt and coffee and set off at 10:30am.

We followed the Central Cross-Island Highway which offers spectacular views of the gorge. Our first stop was the Bilu Sacred Tree the oldest tree along the highway. This 3200-year Lunta Fir tree is about 50m high with a diameter of 3.5m. Our second stop was the Snow Hotel at 3150m which is surrounded by several accessible peaks. I made my way to the nearest peak at 3217m while others had tea. It is a short hike: I took 12 minutes to reach the top.  Our final stop was Wuling, the highest pass in Taiwan where it is possible to see the Yu Mountain (the highest peak in Taiwan at almost 4000m).

The weather in the mountain is always unpredictable. It can be misty and cloudy on one side of the mountain but sunny with blue sky at the other side of the tunnel. It was sunny when I walked an hour earlier. But it turned misty at Wuling. It took us almost two hours to drive back to Tiansiang.

We did not have lunch and were hungry. So we had appetite for the afternoon tea at 4pm and a buffet dinner at 7:30pm. Before dinner, I had a short walk followed by a dip in the indoor pool. After dinner, we sat by the fire on the rooftop listening to an indigenous singer with a powerful deep voice. We also joined other guests dancing till 9:30pm. But I am too old and have no interest in staying on to see a film by the pool while watching the moon and stars. I had a wonderful and relaxing day! 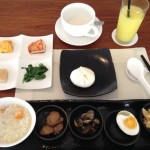 As I wanted to exercise before breakfast, I got up at 7am and went to the rooftop swimming pool. Unfortunately, I was bitten in the water and my skin got itchy and red. I immediately got out and went into a hot pool for ten minutes. I was in the middle of a deep gorge: the air was fresh and it was quiet and peaceful.  The morning sun is beautifully warm and soothing. After a nice breakfast, Cat and I took a walk to visit the nearby temple perching on a hilltop opposite the hotel. Good exercise!

We set off at 10:30am and took the same route back. The weather was superb: clear and cloudless blue sky. We saw the coastal route and the spectacular cliffs at their best! 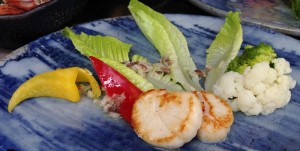 We stopped in Yilan宜蘭 for our third sumptuous meal. We took a set 8-course meal for NT$1500 per person. The restaurant is spacious and stylish with elegant wooden furniture. As we did not arrive till 1:30pm, the waiter was in a rush. Each course was served beautifully in Japanese style but the portion was enormous. I finished everything as I did not want to waste food. But to fully appreciate the food and ambience, it takes at least two to three hours. Also, I would prefer a lighter menu with four to five courses at NT$1000 or less! 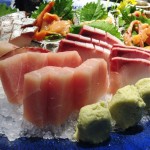 After lunch, we saw two more attractions namely a waterfall and a lookout point which affords a panoramic view of Yilan. We finally arrived at the Mellowfield Hotel at 7pm. We were tired and full. So we went to a Japanese restaurant nearby and had most delicious sashimi. I joined Bertha’s brother, Cathy and Andrew and had a beer in a local pub. I walked back to the hotel and began to have a feel about the Tianmu District which is a popular residential area with houses and low-rise buildings spreading on gentle mountain slopes.

I spent two more leisure days in Taipei and have discovered a couple of interesting places.

First, there are many walking trails in the Tianmu District. Cat, Andrew and I took a 2-hour walk following a path with over 1000 steps to a pumping station built during the Japanese occupation. On our way back to the hotel, we visited a newly built temple and the lovely Tianmu Park.

Second, Taipei has several night markets. I have been to the biggest one at Shilin which I do not like. This time, accompanied by Jocelyn, I went to the one next to the Teacher Training Institute. There is an art bazaar.  The market is very small but more interesting with a local flavour. 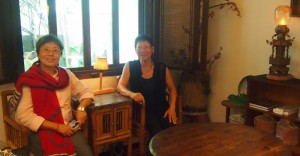 Bertha and I at a tea house, Yungkang Street

Third, there are many areas in Taipei which still retain a simple but enchanting neigbourhood feel. One good example is Yungkang Streetwhich has now turned into a tourist spot with numerous eateries, shops, tea and coffee houses, bars and boutiques. But one can still discover many treasures in the quiet side alleys. Bertha, Andrew and I were excited when we found a tea house run by Mr. Ho Chien tucked away in a garden at No 20-2, Lane 31. The Yeh Tang Tea Culture Research Institute is also located here. The small tea house is elegant filled with all sort of things to do with tea drinking.

Fourth, one will never go hungry in Taipei! Thanks to Bertha, I had wonderful food in Beijing-Do It True near the City Government building, Sit-fun in Yungkang Street and Kongkee, a 24-hour fast food eatery serving excellent beef noodles and its own style burgers in the Tianmu District.

After breakfast, I took an airport bus near the hotel and arrived at the Taoyuan International Airport by 11:30am. I relaxed in the lounge and departed on time and was home before 6pm.

At my age, I love to spend time with my family and close friends. First of all, I would like to thank Bertha for inviting me to join her trip to Taipei. I had a relaxing holiday and had at least seven sumptuous meals!

Secondly, I thank Andrew and Bertha for allowing me to use their photos. I am getting senile and had forgotten to bring my camera on this trip.

Thirdly, Bertha has brought me to the Tianmu District and the Yungkang Street which are worth exploring.  I must say after my visits to Taiwan this year, I start to discover and appreciate this big island more. Though we are all Chinese, the Taiwanese have preserved the traditional Chinese culture and values better. I like Taiwan’s simplicity, earthly and rustic feel, creativity and passion for culture and arts.

I am particularly impressed by the efforts the government and the people put in nature and greening. Construction sites are covered by green walls. There are many parks and sitting out areas with old trees. I watched old folks, families and young people hanging out in the sitting out area at roundabouts and parks in the Tianmu District and Yungkang Street.

I am impressed by the sense of place and neighbourhood. Hong Kong should learn more from Taiwan in order to improve the quality of urban life.