We left the hotel at 9:15am to visit the Mysterious Stone Valley scenic area which has the largest cluster of rocks in Asia. Erosion has created a sculptured landscape. Some of the rocks look like animals and birds. The most interesting ones resemble Buddha. We first took a ride in a tour bus provided by the park and spent about two hours in the park.

We returned to Bole for lunch and had a photo stop at the Bole Aobao which is formed with a huge pile of stone. It is the local customs to greet important guest(s) here before entering the city.

We left Bole at 3:30pm and had a long drive to Karamay克拉玛依市. The region was an uninhabitable desert till the discovery of oil. The first oil well began to work in 1955 and the city entered a great era of exploitation and construction. Today, many beautiful oases with red willows and poplars scattered along the highway. There are some huge wind farms as well as simple oil-drilling towers.

We had a long day. On the way to the Ghost City which is 30km from Karamay, we saw thousands of oil-drilling towers along the highway.

The expansive Ghost City is famous for the Yardan landform which has been shaped by wind erosion. The tour bus took almost an hour to take visitors to see the main attractions. Using some imagination, one can find ruined castles, various kinds of animals, eagles, the sinking Titanic etc.

We were back on the road after a quick lunch. A few sections of the highway were under construction/repair and the road was bumpy.

By the time we reached the entrance to the Kanas Lake喀纳斯湖scenic area, it was already dark. Instead of taking the tour bus provided by the park, we were allowed to drive in with our own coach. This has made life much easier i.e. we did not need to pack and bring a small overnight bag with us.

We were dead tired when we arrived at the hotel in Kanas Village around 10pm. We had dinner and I did not go to bed till midnight.

The Kanas Lake located in the valleys of the Altay Mountain at the northern tip of Xinjiang is the raison d’être for visitors coming at this time of the year. The lake with an average depth of 120m and an area of 45.73km² is the only place in China with Siberian Altay mountain scenery filled with Siberian red pine and many types of cedars. The area is inhabited by Tuvans and Kazakhs who are still leading a traditional agricultural and nomadic life style.

I got up at 7:45am to watch sunrise. But the hotel located far from the lake is not the right place. Nonetheless I had a pleasant walk watching mists descending upon the valley below.

We set off after breakfast and most of us took an hour-long cruise on the lake for RMB120 each. The lake has been described as unearthly beautiful with blue and green water and reflections of golden trees in the lake. Unfortunately, it was too windy for clear reflections on the lake.

I find the cruise not value for money: the boat is uncomfortable with six small seats on each row. We only had 10 minutes on the deck for fresh air and photos. The sightseeing boats in Amsterdam and Paris offer a far better experience for visitors.  In any case, I think the 4.5-km trail along the lake shore would provide the best way to appreciate the lake and the scenery.

I joined a tour to visit a Tuwa village with about 700 Tuvas. Tuwa belonging to a Mongolian tribe is a valiant ethnic minority with a long history. They believe in Lamaism and speak Turkish, resembling the language of Kazakh. Today apart from engaging in hunting and agriculture, many are also providing accommodation for tourists.We were greeted by a Tuwa man who explained Tuwa’s folk custom including how tea and horse-wine are served. He and a lady performed several musical instruments. Finally a young man taught us to horse-riding dance. At the end, he invited me to dance with him!

After lunch, we set off for the Baihaba Village about 30kms away. The route is most scenic with golden poplars, snow-clad mountains, valleys and grasslands, yurts and wooden houses.

We saw the Baihaba River which is the border between China and Kazakhstan from a viewpoint before descending to the Baihaba Village.

We arrived at the Baihaba Village which inhabitants are mostly Kazakhs. There are dozens of places offering home-stays as this village together with Hemu are the two most picturesque and photographed villages for their golden autumn foliage.

I had a leisure stroll in the village watching the locals riding their horses and children playing in their yard. I then joined hundreds of visitors and waited patiently for sunset. The sun was behind thick clouds and most people gave up and left with their camera. I and three photographers lingered on.

Then miracle happened at 7:50pm: the clouds suddenly cleared up, the sky turned red and yellowish orange while the top of mountains on the eastern side turned pinkish purple. The extravaganza of colours lasted for some 15 minutes.

The group brought a lamb for RMB3000 and we had a feast! I popped out at 11pm to look at the starry sky and the mysterious Milky Way.

I got up early to watch sunrise. By 7am, the whole village was in full swing. Hundreds of tourists were standing near the entrance of the village. I saw many locals walking their cows to nearby grassland. Though the temperature had dropped below zero, it was not too cold.

By 8am, the sun had already risen and the sky was too bright for sunrise. I then discovered that people were awaiting the first sunray falling on the surrounding mountains above and the village below which would happen between 9 and 10am.  As breakfast was served at 9am, I could not wait for this magical moment. But I took a few lovely pictures before leaving the village at 10am.

We had a hot and clear day and had four stops in the morning. Guan Yu Pavilion (Watching Fish Pavilion) affords 360° view of the mountains surrounding the lake. I climbed the 1000 steps to the pavilion at 1300m without problem. It is impossible to describe the beautiful scenery: there is unobstructed view of the Altay Mountains on the Kazakh side (north), the Kanas Lake, expansive grasslands, the meandering river flowing into the lake and the majestic surrounding mountain ranges.

After a quick late lunch, we were back on the coach and reached the Multi-coloured Bay at 7pm and just in time for sunset. There were already hundreds of visitors. The Yardun landform here is different from those in the Ghost City and the scale is much smaller. But the colours are gorgeous and the setting by the river makes the place so exquisite and photogenic.  The sunset was beautiful but I could hardly find a spot to take a good photo and enjoy the landscape and sunset in peace. 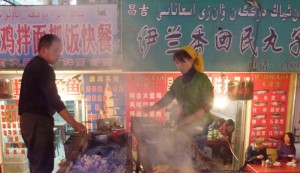 We left at 8:20pm and had a nice dinner in Burqin an hour’s later. The city looks modern and has over 50 hotels as tourists heading to Kanas Lake normally spend a night there. There is a lively night market near the hotel. My roommate and I spent an hour in the night market which is full of restaurants selling grilled meat and fish. We sampled fresh baked bread (nan), nuts, yogurt and grapes.  I had a fantastic day!

We had a long driving day and visited three attractions in Keketuohai 可可托海.  The sunrise was gorgeous. We also saw the Irtysh River额尔齐斯河which is the only river in China flowing north and eventually reaches the Arctic Ocean.

Our first stop was KeKesuli (a lake often called Wild Duck Lake) with some 20 islands formed by papyrus some of which are over 3m high. The lake is scenic and looks golden.

I was lucky to see a caravan of camels and a large herd of sheep passing by.

We then made a quick stop at Mine No 3. The area is rich in mineral deposit. Our guide said that China had paid off a third of her debt to the former USSR from these mines.

After lunch, we arrived at the well preserved Keketuohai scenic area along the 70-km long Irtysh Grand Canyon. There are 108 towering peaks, springs, rivers and streams, primeval forest of pine, poplar and birch forests. We began at the visitor centre which has excellent toilet facilities before taking a trolley bus to the birch forest covering an area of 1.5km². We came here at the best time of the year as most of the birches had just turned golden.  I could have easily spent the whole day sitting here looking at the golden birches and enjoying the scenery.

Next, we boarded a minibus which took us to foot of Amir Sarah (Bell Mountain) which is a landmark. From here, one can take a 6.5-km long trail along a narrow gorge which has many scenic spots. Unfortunately, we only had an hour here. I love to stay in a yurt and spend two days trekking here.

We left at 6:30pm. The sun was about to set: the whole valley was glowing and glittering. We had dinner around 7:30pm and arrived in a hotel in Fuyun 富蕴about 10pm. A great day!

Today’s the National Day and the driver expected heavy traffic on the highway. We therefore set off at 6am and had a surprisingly nice lunch at 11am in a road side restaurant outside the Rainbow City. It is another fantastic example of Yardan landform. Erosion and bright colours of red, orange, ochre, yellow, green, violet, blue, grey and purple have turned this expansive area in the desert into a fairyland!

We left at 1pm and continued our drive in the Gurbantünggüt Desert 古尔班通古特沙漠 the second largest desert in China. Located around 300 to 600m above sea level, it is the largest fixed and semi-fixed desert in China with an area of approximately 50,000km² in the centre of the Dzungaria Basin. About half of the area is covered by sand ridges.

The traffic in the direction of Urumqi was smooth. But we saw a 5-6km long queue of vehicles on the opposite direction. We finally arrived in the capital city of Xinjiang after 6pm and had the only shopping stop of the whole trip. I brought two types of health products for RMB200. We celebrated the end of the trip with a roast lamb prepared in an oven for six hours. The meat was juicy, tender and most delicious! For the first time, we arrived in the hotel early and I enjoyed my stay in a 5-star hotel!

I spent the whole day on the road. We got up at 6am as our flight would be departing around 9am. The plane arrived in Changsha before 12:30pm Shenzhen till 5pm. Our coach took us back to the Hong Kong side at 6pm and I was home at 7:30pm.

Posted under My China trips
Comments (2)