When I woke up at 6am, it was grey and misty. I could not see Kang Yatze, the valley and the nearby mountain ranges. We followed a clear zigzag path to the Kongmaru La (5100m). It took me two hours to reach the pass which affords fantastic views of hills of the Eastern Karakoram and China to the north and the Kang Yatze to the south in a clear day. Unfortunately, it was so misty that I could hardly see anything beyond 10m. It was cold, damp and miserable but atmospheric!

The group moved on swiftly and descended onto a narrow gorge. The rock formations resemble art work and the colours ranging from orca red, purple to green are exceptional and beautiful. We were fortunate and saw a large herd of blue sheep on a steep slope. I saw a small but dramatic waterfall dropping around 100m when walking along a narrow path/cliff.  The river is red and the rock outcrops, pillars and slopes are all red. It began to rain heavily and I dared not take my cameras out of the bag. We had to cross the fast-running stream on several occasions.

Going downhill is easy for a normal person. Unfortunately with my knee problem, I have to walk slowly and cautiously. As other members of the group walked fast, I had a difficult time in catching up with them. I was wary of the slippery and muddy surface and took each step with caution. I succeeded: I had not fallen during the whole trek! 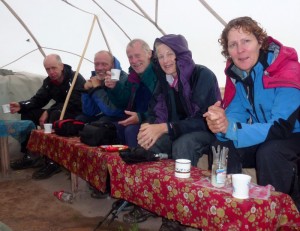 We made our way straight to the campsite and had a late lunch in the dining tent. The staff managed to set up our tents when the rain stopped. Anyway, it’s the wettest day of the whole trip and rained like cats and dogs most of the time.

Ingrid discussed the ascent to Stok Kangri over afternoon tea. I told her about my plan to return to Leh when the group proceeded to the base camp. She accepted my decision. I had two sleeping bags and was not cold. But I did not sleep well as rain made such a noise that kept me awake and everything was damp.

I was glad to start the trek without rain. We crossed the river three times in the morning. The first one involved a big jump. Margaret was scared but finally made it. The third crossing was fun as we had to wade through swirling and fast running water. Tashi and his team did a fantastic job in making the crossing easier and safe for us: they placed big rocks in the stream and giving us a helping hand.

We first descended into a valley where two river meet. Then we followed a tributary valley which leads a long and gradual ascent to Gyuncho La at 4600m. Suddenly I felt uncomfortable: my heart was beating abnormally fast and my chest seemed heavy. I have never experienced this before and still cannot describe my problem. Could it be heart attack? Was it altitude sickness? I could not walk at my usual pace. Suddenly I remembered I had forgotten to take my blood pressure pills in the morning.

I told Tashi that I did not feel well. He told me to rest, took my backpack and stayed with me while the others walked on.  I was cautious and made a very slow ascent to the Gyuncho La. Fortunately the trail follows a valley and is not steep. The group was ready to move on when I reached the pass.  Tashi and I had a quick lunch and continued with the trek as it was getting cold and misty.

I felt much better and could carry my backpack. We followed a trail roughly at the same altitude for an hour before arriving at another pass. From there, it was an easy downhill walk. I reached the campsite at 3pm. Rain poured down relentlessly and it rained throughout the night. I was tired and finally had a sound sleep.

I felt better after a good sleep. We followed the river valley and crossed a few fast-flowing streams. Despite the fog/mist, I enjoyed the green scenery with mountain ranges, spurs and valleys, sheep, cows and yaks. I reached Shang La (4900m) without problem. Descending from the pass, we walked for an hour before having lunch by the Tokpo River. This was the best lunch spot we had on the trek affording great views of the surrounding mountain ranges.

After lunch, we marched onto Gangpoche. The trail is clear and relatively easy. Unfortunately, it started to rain. When I reached the campsite at 3pm, I was wet and cold. It was raining so hard that the staff could not set up our tents.

The rain finally stopped at teatime. I expect rainbows after rain. When a golden beam suddenly shone through the dining tent, we rushed out and were greeted with an amazing rainbow over the valley. Then another rainbow appeared.  What a miracle and an unforgettable sight!

A young man came up while I was taking photos. He asked me where I came from. He is a vet student spending his summer looking after a herd of 650 merino sheep (550 female and 100 male sheep). I had never seen a merino sheep: he invited me to see the herd on the other side of the river. They have 13 staff on site. The sheep spend three months here for grazing and return to the farm in the valley in mid-September. Mating takes place in December and babies are born in April. The sheep are sheared in the summer and the wool can fetch about 1.5 million rupees.

At dinner, Penny who had been feeling unwell told me that she would not join the ascent to Stok Kangri. She would be returning to Leh with me. The weather remained unstable.

I woke up at 5am in high spirit after an excellent sleep (probably the best I had on this trek). I was busy writing travel notes and forgot my blood pressure pills. As my bag had already been packed away, I did not want the staff to waste time to find my bag. In any case, the trek to Mato La (4860m) is not steep and relatively easy.

From the pass, I had a leisure easy stroll to the campsite at Smankarmo, a lovely valley with fabulous views. 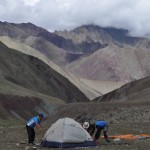 The sun came out at last! I had the best afternoon on the whole trek. I washed my dirty clothes, aired the damp sleeping bags and had a quick wash in the stream. John, David, Ian and Marion walked up a ridge and had fantastic views of the Stok Kangri range.

I found myself a nice spot where I sat comfortably for almost an hour. The scenery is magnificent and timeless. I watched the changing colours of the mountains. Life is simple and the world here is perfect and peaceful!

While the group was talking about preparations for the ascent over dinner, I was thinking about my next trip to visit monasteries. I did not sleep well as the rain kept me awake.

After breakfast, Penny and I said good-bye to our friends wishing them good luck and a successful ascent to Stok Kangri. Accompanied by Tsewang, we set off on a clear day. We crossed the river a couple of times. 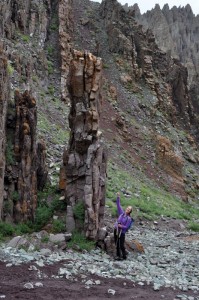 Penny pointing at a stone pillar

It is an easy trek. We met a dozen of trekkers in small groups making their way to the Stok Kangri base camp. When I had my first glimpse of the Stok village from a pass, I suddenly saw Anand and his guide. Anand explained that he could not reach Kang Yatze on August 15 owing to fatigue. He returned to Leh for a rest and was now heading to Stok Kangri. I wished him luck (My group said Anand reached the summit on August 21)

We reached Stok village around 12:30pm and were back in Leh in the afternoon. We went to Rimo Expeditions Office before proceeding to our hotel, Snowland Hotel. It was wonderful to take a hot shower after a 10-day trek! I also had all the dirty clothes washed and dried in the sun.

Around 3:30pm, Penny and I went to the town centre to get a few things done. I went to two local agents to get a quotation for hiring a car for a day to visit several monasteries.  I accompanied Penny to the Potala Medicos where she took a token (No.4) i.e. the fourth patient to see Dr. Thules. We then walked to the bus station to check the bus timetable to Alchi the following day. There is a minibus leaving at 4pm and the fare is 90 rupees.

We returned to the clinic at 5pm.  Dr. Thules had been held up in the hospital and did not arrive till 6:35pm. By the time Penny had her consultation and got her medication, it was almost 7:15pm. We had to pick up our bags left in the Mogul Hotel. It was 7:30pm when we tried to find our way back to Snowland Hotel.

We did not have the address of the hotel. It was dark and started to rain. No one seemed to know about the hotel and we spent some 40 minutes in finding our way through narrow alleys. We were hungry and had a nice buffet with chicken masala and plenty of cooked vegetables in the hotel restaurant.

The hotel is quiet and comfortable with a lovely garden. It was so nice to sleep in a bed with a firm mattress after spending ten nights in a tent. I had an excellent sleep. No more nightmare!