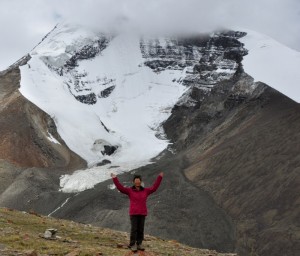 Closest I can get to Kang Yatze!

Routine: wake-up tea at 6am; hot water for washing at 6:15am; bags out before taking breakfast at 7am; setting off at 8am; lunch between 12 noon and 1pm; arriving at campsite between 1:30pm and 3pm; tea at 4pm and dinner at 7pm.

We started our day with a big cooked breakfast with porridge, cereal, eggs and pancakes/bread etc.  While we had our breakfast, Tashi’s team would be packing up.

Chilling is the gateway to the Markha Valley. We sat off at 8am walking on a tarmac road on the left bank of the Zanskar River. An hour later, we arrived at a jolla crossing constructed in 2007 (a jolla is a harness or basket hanging from a single steel cable).  It took an hour for all of us and our stuff (bags, tents, food, cooking utensils etc) to cross the river. Our stuff was loaded onto 19 horses which were already waiting on the other side of the river.

We had an impressive entourage with 19 horses and some 25 people (three men looking after the horses, Tashi and staff, Ingrid, our leader and 12 trekkers). Around 10am, we started to walk along a narrow trail on the right bank of the Zanskar Gorge.  A red-painted collection of chortens marks the point where the Markha River meets the main valley. We turned towards the south-east into the Markha Valley which is picturesque with irrigated fields some of which had already turned golden. The narrow valley planked by rocky mountain ranges on both sides is awesome and impressive.

Our horses and support team normally started after us and would overtake us before the lunch break. They would arrive at the campsite before the group. I saw several old ladies wearing the traditional Ladakhi headdress known as a peraq.

When I arrived at our campsite next to the river around 2:30pm, I found a spacious dining tent, a large cooking tent, four double tents, five single tents and two toilets had already been set up. I was greeted with a hot drink. Perfect!

I decided to skip tea as I would like to visit a monastery in Skiu.  I met Anand, a Singaporean lawyer travelling on his own who was making a second attempt to climb Stok Kangri. His 13-day trek to summit both Stok Kangri (6120m) and Kang Yatze (6400m) with a guide, a climbing guide, a cook and 7 horses only cost USD1100! As I walk slowly and am not a strong trekker, I should have taken a private trek like Anand by myself or with a couple of friends.

We visited the monastery and explored another valley for an hour. We had tea in the monastery’s teahouse.  On my way back to my campsite, I met two Chinese (Lily from Jakarta and CK from Singapore).  They are colleagues and travelled with their friends (John and Marius). Lily arranged a 12-day tour in Ladakh online with Juma Malik of the Glacier Travels. They were picked up in Srinagar and travelled by road to Leh. As a professional tourist, I like to gather travel information from other travellers for future reference.

Markha Valley is the most popular trekking region in Ladakh. On the way back to my campsite, I found at least half a dozen campsites with some 50-70 trekkers. There are also many places offering homestay for 800 rupees per person. It rained heavily throughout the night and I did not sleep well.

We set off in a cloudy day at 7:30am. Vegetation along the Markha River is lush and green while upper valley-slopes are brown and dry. We passed by numerous well-maintained chortens and prayer walls. Small settlements scatter along the trail.

We had morning tea in a temporary tea-stand along the trail. I took two cups of masala tea.  We passed a wolf trap made of stone enclosure with overhanging sides just before lunch.

It started to rain and we finished our picnic lunch in a hurry. We had sunshine again when we had our first river crossing. We changed into our sandals and waded across the fast running Markha River. I am old (the fourth eldest person in the group) and clumsy.  Tashi took my hands to make sure I did not fall into the water!

Today’s trek was pleasant and easy. But there were too many trekkers and horses. It was dusty and I had to cover my face. I arrived at the campsite at 3pm. There was a carnival atmosphere as there were some 30 tents of all sizes, over 50 horses and perhaps just under 100 persons!

I saw a dilapidated castle and a monastery perching on a cliff on the other side of the river. I skipped tea in order to visit the monastery. Unfortunately it was closed. The panoramic views were however nice.  I walked along a beautiful green valley covered with wheat. A young lady with a baby girl offered me homestay with breakfast and dinner for 800 rupees.

The day was warm and I had a quick wash in the river after my walk. It rained again. I slept badly and had many dreams. In my dreams, I went to visit Lillian at her sick bed (She died in 2007) and found my flat in Hong Kong flooded after torrential rain. I had been toying with the idea of deferring my return to Hong Kong so that I could take another trek in Ladakh. I believe the second dream is a signal for me to go home!

The scenery today is striking and most impressive. After a short trek, we arrived at the foot of the Techen Monastery. A zigzag path led us to the monastery perching at the 4000m peak. The sky was crystal blue and cloudless. I had fabulous views of panoramic views of the majestic and photogenic mountain ranges which glowed in the sun.  This side-trip is one of the highlights of the trek.

It’s time for river crossing again. The weather was fabulous and I took plenty of pictures. We passed the Hangkar village which is picturesque with expansive fields of barley and wheat.

A tea break in a parachute tent is always welcomed. David had a blister and Ingrid handled the wound with great care and put on a dressing very professionally. The family’s three-year-old daughter became our model. I was glad to see her father feeding her with green peas instead of biscuits and sweets as snack.

I had my first full view of Kang Yaztse (6400m). We stopped for lunch in a lovely spot where we had fantastic views of the Red Mountains.

After two hours’ walk, I arrived at the Tsering campsite a beautiful location planked by high mountains on both sides. The weather was fine. John and Shaun made their way to a peak near the campsite for panoramic views of the area. I strolled along the valley and found Anand by a spring. The water is fresh, clean and not cold. I washed my hair and had a chat with Anand.

It rained in the evening. Around 11:30pm, I was woken up by lightning and thunder and could not sleep. I was disturbed by the heavy rain pouring down on my tent and the thundering noises from the river.  Again, I had many bad dreams: I was going back to work and felt miserable! I have retired for almost three years and do not want to work!

The weather had changed: it was cloudy and grey. We were approaching the end of the Markha Valley and began an ascent to the Nimaling Plain. The views of the red sandstones and pillars, black cliffs, and rugged peaks covered in snow are beautiful and surreal.

It was a long and slow ascent. The group had a long stop by a pond which would have beautiful reflections of Kang Yatze on a clear day.  I saw Anand before he took a separate path to the Kang Yatze base camp. I wished him luck.

The sky began to darken. I knew rain was on its way and tried to reach the campsite as soon as possible. But I walked too slowly and was caught in the rain about 100m before reaching the dining tent!

Lily’s group arrived an hour later and their tents were next to ours. It started to rain heavily and I spent most of the afternoon chatting with Lily, CK, John and Marius. Lily told me about her walking club which has 3000 members. She loves travelling and has organised many interesting trips. She showed me photos of the Komodo dragons. I also looked at John’s photos on New Zealand. CK told me about his interesting trip in Mongolia and his favourite dishes in Hong Kong.

Lily’s group was informal and relaxed. We sat in the kitchen tent having tea and chatting with the Nepali chef who was baking a cake for Lily. I have spent many lovely evenings in the kitchen of tea houses during my treks in Nepal. But on this occasion, Ingrid had advised us not to go to the kitchen.

They invited me to stay for dinner as the chef always prepared more food that they could eat. I accepted their invitation with pleasure. We had tomato soup, fried rice with vegetables, sautéed mushrooms, red beans and stir-fry cauliflowers. The food had an oriental flavour: I had a delicious meal. We celebrated Lily’s birthday with an enormous chocolate cake with seven gigantic candles. I thanked them for an excellent meal and appreciated their hospitality.

I joined my group dinner at 7pm. As my stomach was full, I only had a tiny plate. It was raining hard again.

All trekkers except our group had gone by the time we had breakfast at 8am. Ingrid suggested a short hike to the ridge behind the campsite. This hike would provide an opportunity for acclimatization and for viewing Kang Yatzes and the Kongmaru La which we would be heading the following day. I walked slowly trailing behind the group as usual.

Though I reached the ridge at 5300m without problem, I would always be the group’s ‘weakest link’. I did not like to hinder the group’s progress and I decided to skip the ascent to Stok Kangri. I would return to Leh on the day when the group departed for the base camp.

After a 3-hour walk, we returned to the campsite for a hot lunch. Time passed slowly after my Asian friends had gone. We had pizza for dinner. I am easy with food but I am not keen about pizza. As I am getting old, I miss seafood, wonton soup, noodles and green vegetables when I am on the road. Another rainy night!