Nilly and Rani, my good friends

Holy Land, the area where the State of Israel is today, is holy for all Abrahamic religions including Judaism, Christianity, Islam and Bahὰ’i Faith.  It has been on my bucket list for decades. I was thrilled when I landed in Israel and met my Israeli friends, Nilly and Rani whom I met last September on my way from Sofia to Belgrade.

In Jewish tradition, Jewish ancestry is traced to three Biblical Patriarchs (Abraham, Isaac and Jacob in the second millennium BC).  Judaism is the traditional faith of the Jewish people. The notion of the “Land of Israel”, known in Hebrew as Eretz Yisrael, has been important and sacred to the Jewish people since Biblical times.  According to the Torah, God promised the land to the three Patriarchs.  Jews enjoyed political autonomy twice before in ancient history (from 1350 to 586 BC and from 140 to 37 BC during the Hasmonean dynasty) before the establishment of the State of Israel in May 1948. The Jewish ethnicity, nationality and religion are strongly related.

The land of present day Israel covers roughly the ancient kingdoms of Israel and Judah. Excavations at el-Tabun in the Carmel Mountain range has produced the longest stratigraphic record in the region representing roughly a million years of human evolution. 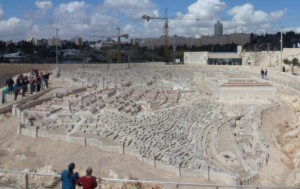 The first record of the name of Israel appears in the Merneptah stele, erected for Egyptian Pharaoh Merneptah c.1209 BC.  Written evidence of the use of Classical Hebrew exists from about 1000 BC.  Around 930 BC, Kingdom of Israel and Kingdom of Judah occupied the northern and southern part of modern Israel respectively around 930 BC. The land was conquered by King Nebuchadnezzar II of Babylon in 586 BC and the First Temple built by King Solomon, son of King David, was destroyed. Herod the Great who ruled from 37 to 6 BC and was a vassal of the Roman Empire, re -built the Temple (the Second Temple). Jesus was crucified by the Romans in 33 AD in Jerusalem and 33 years later the Jews of Judea rose in revolt against Rome, naming their new state as “Israel”. This led to the siege of Jerusalem (69-70AD) and the heroic last stand at Masada (72-73 AD). The Second Temple was destroyed and the only part remaining is the present day Western Wall in Jerusalem. Roman Emperor Hadrian banned Jews from living in Jerusalem in 131 and renamed the Roman province (until then known as ludaea Province) Palaestina. The name “Palestine” (in English) is derived from this.

The first wave of modern Jewish migration to Ottoman-ruled Palestine began in 1881 as Jews fled pogroms in Eastern Europe.  A political Zionism movement founded by Theodor Herzl, an Austro-Hungarian journalist, emerging seeking the establishment of a Jewish state in the Land of Israel. In 1918, a Zionist Commission was formed in Palestine to promote the Zionist objective there.

The region remained under Turkish rule till the end of WWI. The area which included the modern day Israel named Mandatory Palestine came under the British mandate from 1920 to 1948. The Jewish question gradually gained international attention. Between 1939 and 1945, approximately six million Jews in Nazi-occupied Europe were murdered. The genocide of the Jews shocked the world and the cause for a separate state for the Jewish people gained support though the idea met with strong oppositions from Arab countries. 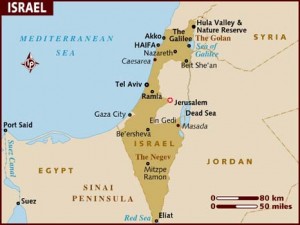 After painful struggles, Israel was finally established on May 14, 1948. In its Basic Laws Israel defines itself as a Jewish and Democratic State. It has since fought several wars with neighbouring Arab states in the course of which it has occupied the West Bank, Sinai Peninsula, Gaza Strip and the Goland Heights. Portions of these territories including East Jerusalem have been annexed by Israel. But the Israeli-Palestinian conflict persists today.

Israel has a total area of 200,770 square kilometres and an estimated population of 8 million (2013).  The largest two ethnic groups are the Jews (75%) and the Arabs (20%). Israel’s development and progress have been remarkable.  Its GDP and GDP per capita (nominal) for 2012 are $243,654 billion and $32,351 respectively. It has also produced six Nobel Prize-winning scientists since 2002. It has one of the highest life expectancies in the world as well as the highest standard of living in the Middle East.

Israel is rich in tourism resources boasting seven World Heritage Sites, 67 national parks and 190 nature reserves. It has the highest number of museums per capita in the world.  Tourism, especially religious tourism is an important industry and received 3.5 million visitors in 2012. 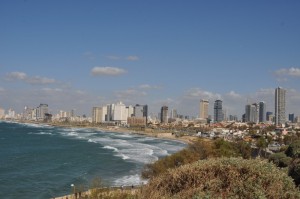 I landed in Tel Aviv around 12:30pm and took a taxi to Nilly’s house in Ramat Gan. I was thrilled to ring Nilly’s bell an hour later and hugged her. I cannot believe our casual encounter on the bus from Sofia, Bulgaria to Belgrade, Serbia last September has finally brought me to Israel.

Nilly is an architect and has built her own house. It is classic but modern and elegant: bright and airy with a lovely garden, a swimming pool and above all a big open kitchen. After a short rest, Nilly took me to Tel Aviv downtown where Rani, her husband’s office is located. Rani greeted me on the street and suggested I start my tour at Shalom Meir Tower which was the tallest building in Tel Aviv till 1999. There is an exhibition on the transformation of the city.

Tel Aviv founded by the Jewish community on the outskirts of the ancient port city of Jaffe in 1909, has been built on sand dunes. Tens of thousands of Jewish immigrations have settled in Tel Aviv since 1880s. Today, the city with a population of over 400,000 people and an area of 52 square kilometres, is the economic and financial hub of Israel. Tel Aviv’s “White City”, a World Heritage Site comprises the world’s largest concentration of Bauhaus buildings. (The greater Tel Aviv area has a population of three million)

We strolled in the charming Neve Tzedek (meaning “oasis of justice”) district, a historical part of the town filled with art galleries, boutiques and restaurants.  It is a hot spot for the chic and trendy people. We then arrived at Hatachanaa (the restored train station where the Ottoman’s first railway line ran between Jaffa and Jerusalem). The sun was setting and the gold, pink and orange colours were most gorgeous. We had a coffee in a nice café watching sunset. 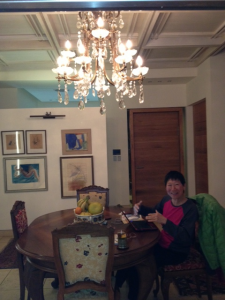 In the evening, I met their children Tom and Sharon, both in their 20s. We had a delicious dinner. I felt at home and had a wonderful sleep.

Israeli is a modern and efficient country with comprehensive highway and public transportation systems. Things however stop on Sabbath i.e. from late afternoon on Friday to Saturday evening. There is no public bus running and most shops are closed.

Rani has his days off on Friday and Saturday. He drove me to Jaffe, an old city, a seaport (for at least 4000 years) and a commercial centre. Dwellings from the Iron Bronze Age have been discovered.

The city, Jaffa, is first mentioned in letters from 1470 BC that record its conquest by Egyptian Pharaoh Thutmose III. It has also been mentioned in the Bible. The ancient port changed many times in the course of history.  The Catholic armies of the First Crusade occupied Jaffe in 1099 and fortified the town and improved its harbour.  Jaffe was captured by Saladin in 1192 but re-taken by Richard the Lionheart. Crusader domination ended in 1268 when the Mamluk Sultan Baibars captured the town and razed its fortifications. In 1336, the Sultan destroyed the harbour in order to prevent landing of the new Crusade. The same thing happened in 1345. In the 16th century, it was conquered by the Ottomans.  Napoleon besieged the city in 1799.

Rapid development took place during the 19th century. By mid-19th century, the city grew prosperous from trade especially in silk and Jaffa oranges, with Europe. Large number of Jewish immigrants also settled in the city. Later the Jews moved to the area of modern Tel Aviv.

Excavations have revealed eight layers of occupation, the oldest dating back 3800 years ago. Attractions in Jaffe include a flea market, the port and the old walled city with magnificent limestone houses, the Clock Tower (first built 1901-03 and one of the few clock towers built in the land of Israel during the Ottoman period), St Peter Church, old Saraya (government house), the Ramesses Gate and Andromeda’s Rock. The Kishleh (Turkish prison) is under renovation and will be turned into a high-class hotel and residence.

I was the only tourist taking a 30-minute tour: it became a private tour! The presentation including an interactive 3D film is interesting. Rani and Nilly took me to see the house museum of Ilana Gur, Israel’s famous sculptor which is filled with her sculptures, jewelry and all sorts of art work she has created and collected. Her creativity and energy are amazing.

It is Jewish custom to have a big family dinner on Friday. Nilly prepared chicken and meat balls for the family and baked a big fish stuffed with herbs particularly for me. I ate to my heart’s delight and almost finished the whole fish.

Nilly and Rani joined her friends on a hiking trip. I gladly went along. There were 12 cars with some 30 participants.  A young guide who is an archaeologist took the group to see three archaeological sites. The weather was unstable and rained when we started. Fortunately, it improved and we had lovely sunshine for most of the day. The countryside is green with pine, olive, almond and cypress trees as well as vineyards. It is most enchanting and beautiful.

Gezer– the site was inhabited for some 3-4000 years. The famous Gezer Calendar (1000BC) measuring 7x11cm is the oldest ancient Hebrew document discovered so far. It is now in Istanbul Archaeological Museum. There are illustrations in English. At the end of the 2-km walk, we had a snack break. I had excellent home-made cakes and olives prepared by Nilly’s friends.

Tel Cayefa-excavations carried out by the guide’s father are still being conducted on this site. The guide read from the Bibles from time to time. I understand he tries to prove the excavation findings have lent support to the Old Testament. There is no illustration and one person tried to translate for me.  The views of the countryside from the hill top are fantastic.

Lakhish – settlements in the area began around 4000 BC. Lakhish was a metropolis in the south with several thousand inhabitants during the Judean kingdom. It was abandoned during the Hellenistic period. There are brief illustrations in English.The trip ended around 4pm and we were home before 5pm. After a light supper, I had an early night preparing for my trip to Jerusalem the next day.