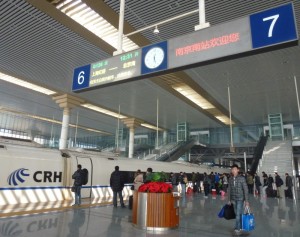 I had a long journey today.  First, I took the 7:20am bus to Nanjing (80yuan) and arrived at the Nanjing南京South Train Station just before noon. I brought a second-class ticket for 443.5yuan and took the 12:30pm high-speed train to Beijing北京. The train is comfortable and I arrived in the capital at 4:50pm.

I wanted to have a taste of old Beijing and found a room for about HK$200 in an inn in a hutong for two nights. When I tried to book one more night, I was told it was fully booked.  I quickly found a hotel opposite the Drum Tower Underground Station which is also close to the inn I would be staying the following two nights.

Beijing was miserable, misty and freezing. Air pollution had reached a hazardous level and people were warned not to go outside. I settled down in my room before 6:30pm. As I was hungry, I had to go out and took a simple hot meal for only 19yuan in a local eatery. One can still live and travel with a small budget in the capital. 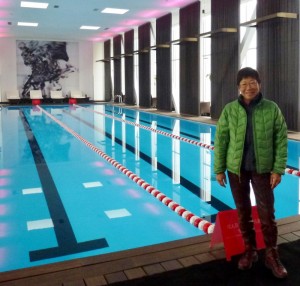 MOMA with a swimming pool in the air

I had a relaxing weekend meeting friends and watching two films in Broadway Cinema located at MOMA, a new and modern residual development at Dongzhimen (meaning the Eastern Gate). The first film is a comedy called “Lost in Thailand” which has been a great success. It is hilarious with outstanding actors and I had a good laugh! The second one is a classic called “Spring Peach” based on a famous novel.

The weather improved a bit on Monday. As I stayed in a hutong near the Drum and Bell Towers, I strolled along the narrow alleys. I enjoyed watching the locals plying their business. Things are rustic and life seems simple in the hutong.  Living conditions have improved with hygienic public toilets every 50-100m. But the situation is far from ideal. It must be a dilemma for urban planners: preservation verses improvements and modernization. I hope a good solution could be found.

I visited the Drum and Bell Towers钟鼓楼for the first time in my life (though I have been to Beijing a dozen times) and strolled along the two artificial lakes close to the Drum Tower. Both were frozen providing an excellent venue for winter sports.  I watched children accompanied by their dotting parents and young people having
lots of fun skating or riding a sledge.  They all looked happy, warm and well-dressed!

As I would not be leaving till 4:30pm, I had the whole morning for sight-seeing. I visited the three oldest religious establishments in Beijing, namely the Buddhist Fayuan Temple法源寺 (645 AD), Niujie Mosque牛街礼拜寺 (996 AD) and a Taoist Baiyuan Temple白云观 (mid-8th ccentury).

I had a nice lunch in a hot-pot restaurant before taking a taxi to the airport at 1pm.  There was not much traffic on the road and I checked in before 2pm. My plane was delayed and I did not arrive in HK till 8:30pm.

When I first planned this trip, I only had Putuo Shan and the famous canal region near Shanghai in mind. While I was in Putuo Shan, I decided to go to Jiuhua Shan as well thus completing my tour to the four sacred Buddhist Mountains in China. Things have worked out well and I had an interesting tour of temples in Ningbo, Putuo Shan, Jiuhua Shan and Beijing. I have learnt a lot.

I am not a Buddhist but appreciate the far-reaching impacts of religions on both history and culture of a nation and the people.  Religious establishments provide an interesting way to discover the past including the culture, architecture and scientific attainments of the time.  Both Asoka Temple and Tiantong Temple with over 1700 years of history are outstanding and worth visiting.

This trip also makes me fully appreciate the openness and far-reaching impacts of the Tang Dynasty. Buddhism as well as the architectural styles of the time spread from China to Japan. The temples in Shikuko which I visited last December remind me of the influence of the Tang Dynasty on Japan.  At the same, it is amazing to see the everlasting impacts of Kim Qiaoque, a Korean monk on Jiuhua Shan. Both Putuo Shan and Jiuhua Shan play an important role in the cultural and religious links with the Japanese and Korean Buddhists.  I am inspired and plan to visit the 33 Guan Yin Temples in Japan as well as temples in Korea which had brought Kim Qiaoque to Jiuhua Shan in the 8th century.

This is my first visit to Ningbo and my overland trip from Ningbo all the way to Beijing.  What I have seen en route is alarming.

First, Ningbo and its surrounding area (stretching over some 200-300 square kilometres) resemble an enormous messy building site. There are also lots of new developments along the highway from Ningbo to Jiuhua Shan and from there to Nanjing.  Agricultural land is fast disappearing and is being replaced by ugly and empty high rise buildings and factories.  How many more new residential units are really required?

Second, I had hardly seen the sky during the entire period as a result of the foggy weather. But poor visibility was also a result of pollution caused by emissions from factories, vehicles and coal burning.  WHO guidelines say average concentrations of the tiniest pollution particles – called PM2.5 – should be no more than 25 microgrammes per cubic metre.  Air is unhealthy above 100 microgrammes. At 300, all children and elderly people should remain indoors.

During my brief stay in Beijing, the air pollution reached a hazardous level.  Official Beijing city readings on January 12 suggested pollution levels over 400 causing alarm and widespread dissatisfaction amongst the residents.  The problem was widely reported in the national media. But is there a solution in sight? I doubt it as the country and the people are still too preoccupied with economic growth as well as material and physical developments. It is alarming but will the government and the nation as a whole have the resolve and accord top priority to deal with this pressing issue? I am not optimistic.