The bus left Ningbo at 7:30am and made numerous stops en route. The journey was unpleasant as the bus was dirty and smelly.  Most of the passengers looked like peasants returning from work in the cities. They all carried lots of bags with them. Some passengers including the driver smoked. I saw most of the agricultural land along the road has been cleared.  Numerous ugly high rise residential blocks have been built but remain empty.

When the bus arrived at the Qingyang青暘bus station, the driver told all of us to get off.  A young girl and I were the only passengers heading to Jiuhua Shan. We got into a small car and a driver drove us off. He however stopped a few kilometres before our destination and took us to his hotel. He offered us a room of 100 yuan and promised to take us to the mountain the following day. Yun, a girl at the age of 25 on a pilgrimage tour, did not like the room.  She spotted a Green Tree Hotel (a popular hotel chain in China) close by and suggested us take a look. We had a good offer of about 120yuan with breakfast, free internet and a membership. It worked out roughly the same as what the guy had offered us. We therefore spent a night in this hotel.

We had a decent meal in a local restaurant. Jun is a vegetarian and I took a set dinner. But it was so salty that I had to drink over a litre of water that evening. I wish the people in China could use no MSG and less salt.

Jiuhua Shan literally means “Nine Glorious Mountain” located in Anhui province is famous for its rich landscape and ancient temples. The temples and shrines are dedicated to Ksitigarbja (known in Chinese as Dizang地藏 and Jizo in Japanese) who is a bodhisattva and protector of beings in hell realms according to Mahayana Buddhist tradition. With a gross area of 120 square kilometres, Jiuhua features 99 peaks with old pines, green bamboo forests, rocks, waterfalls, streams and caves. The highest peak is Shiwang Peak at 1342m. Li Bai, a celebrated poet in the Tang Dynasty was said to have lived and taught there. 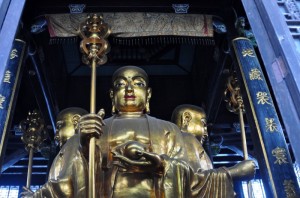 In 719AD, Kim Qiaoque, a Silla prince (today’s Qingzhou city in South Korea) came to Jiuhua Shan and stayed there till his death at the age of 99. His corporeal body stayed intact. Because of his similar appearance to Dizang Boddhisattva, the monks believed Dizang Boddhisattva was reincarnated in him. As a result, Jiuhua Shan with a large number of Buddhist relics became the place to hold rites for Dizang Boddhisattva. There are also half a dozen of monks and a nun whose body has stayed intact and two can still be seen.

Jun and I had breakfast at 7am, stored our luggage in the hotel and set off with a backpack. Jun carried a heavy bag as she had brought lots of dried fruits and nuts as offerings.  We first took a bus to the tourist service centre where we had to buy an entry ticket for 110yuan and a 50-yuan bus ticket valid for three days. The park entrance is 13km away.

On arrival, we went to the Zhiyuan Temple 祗园寺 (16th century) and I looked for the monk recommended by the ladies whom I met at Tiantong Temple. He turns out to be the deputy head of the temple. There are dormitory beds (20 yuan a night) as well a double room for 360yuan a night in the 4-star hotel run by the temple.  As Jun does not wish to spend money on accommodation, she decided to stay in the dormitory.  Though I prefer a warm bed in the hotel, I stayed with her.

After leaving my bag in there, I went out to visit temples along the Jiuhuajie (the old street) including the Zhantanlin Temple旃檀禪寺, Huacheng Temple 化城寺 (first temple in Jiuhua Shan built in 757 AD which is now a museum), Dizang Buddhist Temple 地藏寺, Dabeilou Temple and Tianchi Temple.  The old street with traditional houses and temples with yellow walls all covered in snow was picturesque. There were few visitors and I enjoyed the tranquil atmosphere.

Highlight of my stay was my visit to Tiantai Peak. I had to take a bus to the ropeway terminal and paid 110yuan for a return ticket. I had to climb some 600 steps before reaching the Tiantai Temple天台正顶.  The steps were covered with snow and I was scared. The temple is not as spectacular as the view from the top of the mountain. I was afraid of falling and had to hold tightly on the iron rail on the way down. I later learnt that the ropeway was closed for a few days because of the heavy snow. So I was lucky to arrive at the right time and had a lovely afternoon.

I met up with Jun and had dinner at Zhiyuan Temple at 4:30pm. The 8-yuan vegetarian meal is most delicious. We then attended the evening praying session from 5:30 to 6:30pm. As there was nothing to do, we went to bed at 8pm. It was freezing and the bed though clean was (as expected) damp and cold. I had two heavy quilts and most of my warm clothes on. It was uncomfortable and I slept badly. (I therefore returned to Green Tree Hotel the following night).

We got up early and had breakfast at 5:30am (4yuan). Then I sat off to Roushen Temple 肉身宝殿 which is located behind the Dizang Temple and visited a number of interesting temples including Wuliang Temple and Upper Zendo (1167 AD) which has a Di Shui Guan Yin and Jin Sha Spring. Then I strolled along the Jiuhuajie again and went into Huacheng Temple.

I returned to Zhiyuan Temple for lunch at 10:30am (8yuan). After lunch, I followed a well-paved 5-km path to visit a few attractions.

Baisuigong 百发宫 at the top of a peak has a Coporeal Body Hall containing the body of a monk named Wu Xia who lived in the 16th century and died at the age of 126. His body covered in gold leaf remains intact.  Natural Sleeping Buddha,  East Cliff Temple東崖院 where Kim Qiaoque had medicated and Huixiang Pavilion 回香阁 and Pagoda of All Buddhas.

The walk uphill was not a problem. But my nightmare began when I had to take the 700-m downhill path leading me back to Jiuhuajie.  As there were few visitors using this path, no one cleared the snow. It was very slippery and I fell many times. Fortunately I had my leather pants on and did not get too wet! I took 30 minutes to get down! 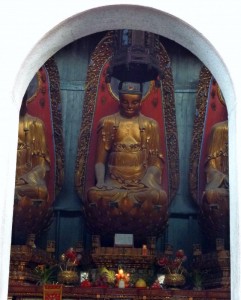 On my way back to Zhiyuan Temple for dinner, I stopped at a nunnery and saw the intact body of the nun at Tonghui Nunnery.  I took the 5:30pm bus back to the tourist service centre. The bus driver was very kind and offered to take me back to the hotel in his own car for free. Anyway, I appreciated his kindness and gave him a tip for the ride. I had a hot shower, checked my emails and had an excellent sleep.