Mt. Koya (also known as Koyasan) is primarily known as the world headquarters of the Shingon sect of Japanese Buddhism. The original monastery established by Kobo Daishi in 819 AD has now grown into the town of Koya featuring a university dedicated to religious studies and 120 temples.

The mountain complex, a World Heritage Site is home to (a) Okunoin奥の院, the mausoleum of Kukai surrounded by an immense graveyard (the largest in Japan with some 200,000 graves), (b) Dai Garan 壇上伽藍, heartland of Mt. Koya with the iconic Konpon Daito根本大塔, a pagoda, and (c) Kongobuji金剛峯寺head temple of the Shingon Buddhism (Koyasan is a modifying word for Kongobuji).

I stayed in bed till 5:30am though I had been awake for hours. I attended the morning praying session at 6am. The hall is small with about ten monks including a German, a Croatian lady and a Frenchman. It’s dark and atmospheric with smoke coming from incense sticks and candles, chiming sounds from bells, praying and chanting. Though I do not understand the language, I find the experience spiritual.

We had a great morning. After breakfast, we first proceeded to Dai Garan. Kukai’s vision was that Mt. Koya was to become a representation of the two mandalas that form the basis of Shingon Buddhism: the central plateau as the Womb Realm mandala, with the peaks surrounding the area of the petals of a lotus; and located in the centre if this would be the Diamond Realm mandala in the form of a temple, Kongobuji – the Diamond Peak Temple. At the centre of the temple complex sits a statute of Mahavairocana Buddha who personifies Ultimate Reality.

The complex all covered in snow and without tourist is most beautiful and unearthly. I walked around the complex but all halls except the hall at the Konpon Daito were closed. It’s interesting to see Miyashiro; one of the halls dedicated to Shinto deities who watch over Mt. Koya.

Our second stop was the Kongobuji.  We were given about half an hour to visit the temple. I did not know there is plenty to see inside till Miss Luk told me and a few members to take off our shoes to go inside. We followed her to see the garden and the main hall. Tea and biscuit were served. But other members who had seen the inside did not join and waited for us on the bus. I felt embarrassed when we got on the bus half an hour later. I could have spent another hour in the complex!

Our last stop was the Okunoin. Most of us decided to walk despite the slippery road covered in snow. There are 20,000 graves many with exquisite sculpture and design. It’s atmospheric to see countless graves covered in snow under hundreds of old majestic and tall pine trees against a grey sky.

While walking towards the Kobo Daishi Temple, I passed by four monks carrying a huge meal box to Kobo Daishi. (It is believed he is not dead but rather mediating. Hence, monks feed him every day and change his clothes) I was also impressed by another scene where pilgrims lining up in snow to pour water over statutes of deities. 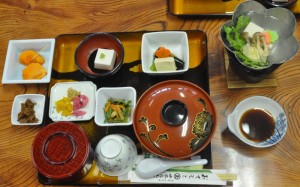 After a late lunch, we set off for the airport. On the way, we stopped by a local store where I brought lots of fresh produce for nothing! In Hong Kong, I might have to pay five times more!

Our Cathay Pacific Airways flight left on time and I arrived in Hong Kong at 9:30pm. I was home around 11pm.

This is my third pilgrimage tour. My first pilgrimage trip was with the Buddhist Compassion Organisation to Hunan, China some ten years ago. In 2008, I completed the final stage of the St James’ way on foot from Sarria to Santiago de Compostela in Spain (over 100km in five days).  Though I am not a Catholic or Buddhist, I find such trips special, spiritual and inspirational.

This 5-day tour is very special for several reasons.

However, I find the itinerary too packed and wish I could have more time to take a closer look at Ryozenji, Shosanji, Tairyuju, Yakuoji and Mt. Koya.

I have plans to visit Japan next April. This trip has stimulated my interest in the sacred sites and pilgrimage routes in Japan which are on the World Heritage Sites List. I hope to complete the pilgrimage route and visit the remaining 65 temples in Shikoku and revisit Mt. Koya. If possible, I shall go on foot to some of the temples. I am sure the cherry blossom season would be equally enchanting.

Posted under My Japan trips
Comments (0)