Kobo Daishi弘法大師, founder of Shingon-shu or “True Word School” 真言宗, was born in Shikoku 四国.  The famous 1400-km long 88-temple pilgrimage route in Shikoku 四国遍路,is associated with Kobo Daishi. After completing the first stage of the pilgrimage route visiting 23 temples in Tokushima Prefecture, I reached his final resting place in Mt. Koya高野山.  The pilgrimage experience, exquisite architectures of the temples and beautiful scenery with foliage and snow are most unforgettable.

This trip is all about Kukai空海 (774-835 AD), known posthumously as Kobo Daishi and referred by his followers as Henjo-Kongo 遍照金剛. He is also famous as a poet, artist, scholar, calligrapher and engineer.

Kukai was born in the present Zentsuji precincts in Shikoku, the smallest and least populous (over 4 million people) of the four main islands of Japan. He learnt the Chinese classics at the age of 15 and was introduced to Buddhism in his early twenties.In 804 AD, Kukai took part in a government-sponsored expedition to China in order to learn more about the Mahavairocana Sutra. Another famous monk, Saicho (who later founded the Tendai School) was also on this expedition. He landed in Fujian and travelled to Chang’an (present day Xian). In 805 AD, he met Master Hui-guo (746-805 AD) 7th Patriarch of Esoteric Buddhism who initiated him into the esoteric Buddhism tradition at Chang’an Qinglong Monastery 青龍寺. Before his death, Hui Guo instructed Kukai to return to Japan to spread esoteric teachings.

In 806 AD, Kukai arrived in Japan as the 8th Patriarch of Esoteric Buddhism bringing with him a large number of texts, many of which were new to Japan and were esoteric in character, as well as several texts on the Sanskrit language and the Siddham script.

Kukai petitioned for state support for establishing the new esoteric Buddhism in Japan. The court ordered him to reside in Takaosan (later Jingo-ji) Temple which was Kukai’s headquarters for the next 14 years. At Saicho’s request, Kukai gave him an introductory initiation in 812 AD and later granted him a second-level initiation. Kukai refused to bestow the final initiation (which would qualify him as a master of esoteric Buddhism) because Saicho had not completed the required studies. This led to a fall-out between them and this feud subsequently extended to the Shingon and Tendai sects. 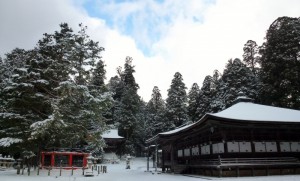 In 816 AD, Emperor Saga accepted Kukai’s request to establish a mountain retreat at Mt. Koya. The ground was officially consecrated in 819 AD and the project was not fully realized until after his death owing to difficulties in fund-raising.  Emperor Junna (r.823-833 AD) was well disposed towards Kukai and used the term Shingon-shu for the first time. This conferred state authorization and Shingon became legitimate. Kukai completed his magnum opus, The Jujushinron十住心論 (Treatise on The Ten Stages of the Development of Mind) in 830 AD. He spent his last three years in Mt. Koya. His religious writings, some fifty works, expounded the tantric Buddhist Shingon doctrine.

The 88 temples spreading in four prefectures of Shikoku are all associated with Kukai’s in learning and practicing Buddhism. Out of these 88 temples, 23 are located in Tokushima, 16 in Kochi, 26 in Ehime and 23 in Kagawa. The pilgrim’s journey through these four prefectures is likened to a symbolic path to enlightenment, with temples 1-23 representing the idea of awakening発心, 24-39 austerity and discipline修行, 40-65 attaining enlightenment菩提and 66-68 entering nirvana涅槃,.

Pilgrims normally begin clockwise at Ryozenji (Stop 1) in Tokushima. But during leap years, pilgrims can do it in a reversed order. Upon completion, pilgrims go to Mt. Koya to visit Dai Garan and pay respect to Kobo Daishi’s final resting place.

The traditional pilgrims go on foot taking 45-60 days on foot. Today the pilgrimage can be done in 9-12 days by bus and 10 days by car. Over 200,000 pilgrims make this trip a year. The traditional pilgrim (henro) costume comprises a hat (sugegasa笠), a white jacket (hakui白衣) emblazoned with the characters reading dōgyō ninin meaning “two traveling together”) and a walking pole (kongozue金剛杖). This may be supplemented by a symbolic robe round the neck (wagesa). The henro also carries a bag (zudabukuro ずだ袋), containing name slips (osamefuda納札), prayer beads (juzu数珠), a record book (nokyocho納経帳), incense sticks, candles, coins used as offerings. The religious henro may also carry a book of sutra (kyohon経本) and a bell (jirei).

Buddhist Compassion Organisation, a charitable organisation founded by my friend Wendy and her husband Patrick, has been publishing a bi-weekly Buddhist magazine 《溫暖人間》佛教雙周刊since September 2, 1999. They also organise pilgrimage tours to China, India and Nepal, Taiwan, Korea and Japan from time to time. I have known Wendy since 1975 when she led a study tour sponsored by Sing Tao Newspaper. I was one of the lucky students and have benefitted enormously from this tour.

I learnt about this trip by chance when I dropped by Wendy’s office in late October. I was thrilled to join the tour which had 37 participants including 12 graduates from the Master of Buddhism Studies from the University of Hong Kong. We had a good pre-departure briefing on Shikoku and the pilgrimage route.

We assembled at the airport at 8:20am and the plane departed Hong Kong two hours later. I was surprised the group had a VIP reception by the Tokushima Prefecture Government at the airport as we made history as the first overseas pilgrimage group. We had a gorgeous sunny day and I found the development along the Kobe-Awaji-Naruto Expressway so clean and tidy.  We had a comfortable ride and arrived at our hotel in the Tokushima City after 7pm.

On the way, the local guide, Miss Luk who speaks both Cantonese and Japanese briefed us on the trip and rites. We would be visiting the first 23 temples in three days. Layout of all temples to be visited is similar with an entrance, a fountain for washing, a bell pavilion, a main hall dedicated to a deity, a hall dedicated to Kobo Daishi.

Upon arrival in a temple, a pilgrim washes his/her hands and mouth before proceeding to the Hondo (main hall). After offering coins, incense, and the osamefuda, the Heart Sutra般若心経is chanted along with repetition of the Mantra of the main image本尊and the Mantra of Light光明真言. The pilgrim then proceeds to the Daishido (Kobo Daishi hall) and repeat the same steps finishing off with the repetition of the Gohogo Mantra after the Heart Sutra.  The pilgrim can pay Y300 to have the nokyocho stamped.

We stopped by a shop to buy the equipment. I brought a pack of osamefuda, a nokyocho and a box of candles.

Life of a pilgrim is simple. We woke up at 6am, set off at 7:30am and had vegetarian food. As it was a leap year, we did the tour in a reverse order. We began our day with the chanting of the Heart Sutra three times.

It was a lovely clear day with sunshine. We visited only six temples as they are far from the Tokushima City.   I was excited when stepping into the first temple of this tour and tried to follow the rites respectfully.  I had my hands washed and my mouth cleaned at each temple despite the icy water. I also learnt to ring the bell before and not after entering the hall.

Yakushi Nyorai is the deity for healing. This temple located on a hillside attracts lots of people who suffer from ill health as well.  It is the common practice for pilgrims to place a one-yen coin on each step and the total number of coins to be placed should be the same as one’s age. I have lost count of my age and had cheated by placing less than 50 coins on my way up to the main gate!

It’s thrilling to still find many beautiful and colourful maple trees on the hill side. We could not stop taking photos of the temple with its beautiful architecture and an iconic pagoda. We also had a marvelous panorama view of the town and coastline.

This temple is also devoted to Yakushi Nyorai with halls nesting in the wooded hillside.

This is the highlight of the first day. We took a 3.7-km long ropeway passing over a river and two peaks before reaching this majestic temple at the top of a hill.  Kobo Daishi had spent considerable time here and there are many monuments including a sitting statute of Kobo Daishi at the top of a hill looking out at the sea where he had medicated.  As I only had 45 minutes there, I did not manage to visit all the main sites.  What a pity!

We had a lovely hot-pot lunch at the ropeway terminal.

We first saw this temple from the ropeway to Tairyuji. It is half hidden in beautiful woodland.

Pilgrims are not allowed to light incense sticks and candles in temples after dark. In winter, it gets dark around 5pm. Hence, we returned to our hotel after Stop 18. Before dinner, Jenus my nice roommate and I went window shopping. Things are not cheap in Japan but the cost of living in Shikoku is definitely lower that the main cities.

Posted under My Japan trips
Comments (0)