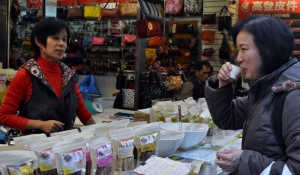 The 35th anniversary gathering of my Social Work Class will be held in Taiwan next July. I had no intention to visit Taipei before this occasion till my neighbour Jocelyn persuaded me to go with her.  This is the only trip I have taken against my wish since my retirement.

Taiwan 台灣 formerly known as “Formosa” 福爾摩沙 has an area of 36,193 square kilometres and a population of 23 million. The name Formosa dated from 1544, when Portuguese sailors sighted the main island of Taiwan and named it Ilha Formosa i.e. “Beautiful Island”. The Qing Government ceded Taiwan to Japan after its defeat at the Sino-Japanese War in 1895.

Following the 1911 Revolution overthrowing the Qing Government, the Republic of China (ROC) was established in 1912. Japanese rule in Taiwan ended when Japan surrendered Taiwan to ROC military forces on behalf of the Allies at the end of the World War II in 1945.  When the Communist Party took control of mainland China and founded the People’s Republic of China (PRC) in 1949, the ROC relocated its government to Taiwan.

My neighbor Jocelyn is a nurse in her mid-thirties. She had to exhaust her leave before the end of the year.  As her husband Mark had to work, she had been desperate in finding a travel companion for months. Jocelyn does not like to travel alone and pay single room supplement.

I saw Jocelyn on November 24 while doing my gardening. Knowing I might be able to join her on a short trip, she immediately rushed to search for vacation ideas. Jocelyn seldom travels and preferred a 4-day trip. However, a 2 to 3-day trip would suit me better as I had prior engagement on November 26 and 29.  After spending almost two hours at a travel agency, I reluctantly agreed to take a 4-day trip to Taipei 台北 with late departure and early return 晚去早返 while she had early departure/ late return 早去晚返. Thus, I only had two full days in Taipei. 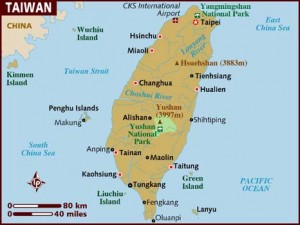 Taipei is 816 km from Hong Kong. My flight took off at 6:30pm and I arrived in Taipei before 8pm.  I took the airport bus to Taipei Bus Terminal and my hotel is only 10 minutes away on foot. As it was raining, I took the Taipei Mass Rapid Transit (MRT) to the Ximen 西门 station. I reached the hotel before 9:30pm.

Jocelyn was out. I went to the Ximending 西门町 night market. Many tourists love night markets and street food in Taiwan. I had a quick look at the shops and food stalls but I am not crazy about street food. Instead I had a rice noodle soup with duck meat in a popular eatery.

Jocelyn was in the room when I got back. She told me about her frustrating day. She left Hong Kong around noon but did not arrive at the hotel till 6pm.  As she had not checked the location of the hotel online or picked up maps at the airport, she wasted much time in finding her way to the hotel.

Both of us have visited Taipei before. We decided to go to Danshui 淡水 together. The Spanish landed in Danshui and Keelung 基隆 in 1626 as a base to extend their trading. The colonial period in Danshui lasted 16 years till 1642 when the last Spanish fortress fell to Dutch forces. The Dutch built the Fort San Domingo in 1644.  The fort was leased by the Qing Government to the British in 1860 and the British established a consulate there. Given the presence of the Portuguese, Spaniard, British and Japanese for some 300 years, Danshui has a special blend of architectures with churches side by side traditional temples and many educational institutions.

The most prominent figure in Danshui is George Leslie Mackay (1844-1906) from a Canadian Presbyterian Church who arrived in Danshui in 1872 to spread the gospel and provide educational and medical services. He and his family have left their footprints all over Danshui: the Mackay Residence (1875), Mackay Hospital (1879), Oxford College (1882), Residence for Misses (females on missionary work) (1906), Residence of Reverends (1909), Danshui Girls’s School (1884), Women’s School (1910), Octagonal Tower (1925), Danshui Church (1933) and Mackay Family Cemetery. There are lots of historical buildings with an interesting blend of western and oriental architectures. 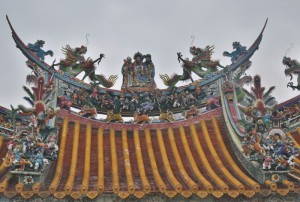 We spent about four hours in Danshui following a walking trail. The main attractions we visited include the Little White House (which was the Customs Officers’ residence), Octagonal Tower, Women’s School, Danshui Girls’ School, Mackay’s Residence, the Residence of Misses and Reverends, Oxford College and Fort San Domingo. I also took a quick look at the Danshui Fuyou Temple (1796), Danshui’s oldest temple.

As Jocelyn is not interested in monuments, I did not drag her to the Hobe Fort, Martyrs’ Shrine and Fisherman’s Wharf.

Jocelyn loves street food and we spent an hour strolling along the waterfront and Danshui Old street looking at the shops selling all sorts of snacks and food stalls. I saw iron-hard preserved eggs, fish crisp, fish ball soup, shrimp rolls, gigantic ice-cream etc. We tried a few things and I decided to leave. Jocelyn stayed on for another two hours enjoying free samples and stocking up snacks! 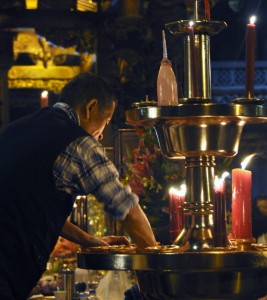 My next stop was Taipei Fine Arts Museum opened since 1983. I did not find the formal entrance and got in from a side door. A receptionist told me to buy a ticket from a vendor machine and enter from a nearby entrance. I spent an hour without knowing what the exhibits were all about. There is no directional sign and the colour scheme is somber (mainly in black and white). There are numerous visual installations with few explanations. If explanations are available, they are often in tiny prints. One visitor came prepared: he brought with him a magnifier.

At the end of the tour, I went to the reception counter to ask about the exhibits. She then told me that the Museum is hosting the Taipei Biennial 2012 and the theme is “Death and Life of Fiction”. She gave me a 159-page booklet on the artists and their works. I was bewildered: the booklet or leaflet should have been given to museum goers at the entrance. I had been to the Venice Biennial, the Liverpool Biennial and a number of international events. The management should have provided a simple leaflet to enable viewers to better comprehend the exhibition.

My last stop was the famous Long Shan Temple 龙山寺 which worships Guanyin Buddha. This old district has a cluster of herbal medicine shops and other traditional trades. I walked to the Ximen Red Building 西门红楼 which was first built as a public market and has been restored for use as a venue for performing arts and creative industries. From there, I walked back to the hotel.

Jocelyn and I had our own programme today. I got up at 6:30am, walked to the Taipei Bus Terminal and took a bus to the Dharma Drum Mountain 法鼓山 at Jinshan金山at 7:30am. The journey took almost two hours.

On the way to the mountain, I was told that the mountain was closed to visitors as there was an annual religious event水陆大發会. A Buddhist kindly took me to one of the halls and told me to sit through one of the sessions. I did and it was quite an experience. As I am not a Buddhist, I had to stay outside the hall. I was given a sutra and followed others to chant and recite in Putonghua.

I loved to spend the whole day there but I had to leave at 11am. I had an appointment with Mingkit, a HKU classmate who has moved to Taiwan as her husband works at a research centre near Hsinchu新竹.

At 1pm, I took the Taiwan High Speed Rail (THSR) to Hsinchu. This 345-km rail constructed at a cost of US$18 billion was opened in 2007.  It takes 98 minutes to travel from Taipei to Kaohsiung (高雄). 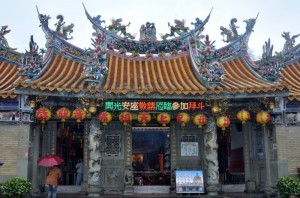 I arrived at Hsinchu (72km away from Taipei) 30 minutes later. The journey cost me NT280. It was raining heavily and Mingkit took me to Beipu 北埔, an old town famous for its Tin Hau temple 慈天宫 and agricultural products.  I tried rice noodles and almond tea which are cheap but delicious. I also brought three catties of seasonal dried fruits, rice noodles and almond paste to bring home.  We talked till Mingkit dropped me at the station around 5pm.

Jocelyn wanted to go to Taipei’s biggest night market at Shilin士林夜市. We arranged to meet up at the MRT station at 7:30pm.  She did not turn up and I did not know what had happened to her. I left the MRT station at 7:45pm, took a quick look at the night market and returned to the hotel around 9pm. The street food does not appeal to me and I am scared to eat at the crowded underground cooked food centre. There were over 1,000 people but I saw only a few narrow fire exits. In case there is a fire, it can be disastrous.

I did not see Jocelyn till she returned at 11pm. She arrived late and had spent almost three hours at the night market sampling street food. She seemed very satisfied and happy. I went to bed before she came out from her shower as I had to get up very early to go to the airport.

It was pouring with rain. I walked to the Taipei Bus Terminal and took the 7:30am bus to the airport.  My Dragon Air flight departed on time at 10:55am and I was home in early afternoon.

I made this trip simply because of Jocelyn. I trust she had a good time sampling famous Taiwanese snacks and street food and shopping. I hope this trip has provided her an opportunity to learn to travel on her own and gain greater confidence in herself. After all, travelling is one of the best ways for growth and self-development.

This is my third visit to Taipei. I can see Taiwan has changed a lot since my first visit in early 1980s. After having visited many places in China, I particularly appreciate Taiwan’s “earthly” feel and the importance it has attached to culture.  There are many new attractions and museums. But this trip is not value for money for me at all as I spent only two full days in Taipei. I also find hotels in Taipei over-priced.

There are however several pleasant surprises. The new high speed rail is good and the fare is reasonable. Second, I enjoy seeing Mingkit whom I last saw in Toronto seven years ago. Third, I was lucky to attend some of the most important annual events in Dharma Drum Mountain.

Posted under My China trips
Comments (1)