We spent the whole day on the train.  We were tired and slept till 1pm. After lunch in the restaurant car, we played mahjong using Tsui’s suitcase as the table! All passengers stopped by to watch and were amazed at the tiny tiles!

We got off at the Mohe station around 6pm.  Mohe has a subarctic climate with a long winter from late October to April. Green shoots only come out in May and June and flowers are in full blossom in July and August. Following a brief autumn with golden beech leaves, snow falls in October. The main attraction in Mohe is the Arctic Village which used to be a small fishing village inhabited by Tungusic people 鄂倫春族 of ancient Manchuria滿洲.  The natives have since been resettled in Inner Mongolia. 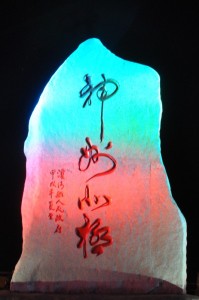 We were met by our local guide, Mr. Nip聶先生 who is young and cheerful. After having a hearty meal in a local restaurant, we headed to the Arctic / Polar Village which is the northernmost spot in China. Chinese is a wonderful language (difficult for foreigners to learn and grasp the tone and subtlety). The place is called shenzhoubeiji神州北極 which literally means China’s North Pole. Is it not a misrepresentation? But it makes sense to Mainland Chinese and they are happy to take it as China’s North Pole!

According to Mr. Nip, the Heilongjiang government decided in 1990s to make use of Mohe’s unique geographic location i.e. being the northernmost point of China and the only place in China for aurora viewing. A Northern Lights Festival is held at the time of Summer Solstice. In winter, tourists come for an arctic experience! The government has since built an airport and it only takes an hour by road from Mohe. 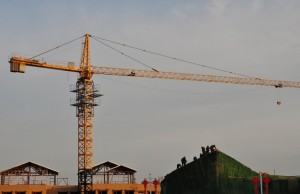 The Arctic village with a population of 2000 to 3000 is fast becoming a destination for fun-seekers at China’s North Pole. As a result of successful promotion, 10,000 -20,000 visitors go to the Northern Lights Festival in the hope to see the astronomical phenomenon of aurora borealis.

Tourism infrastructure is far from adequate. There are only a couple of quality hotels. Visitors mostly stay in family-run inns where a few rooms are built next to their own house. During the festival, even a modest room for two with private toilet would cost RMB200- 400. The top end hotels would charge RMB800 for a room. We stayed at a family inn and the rooms are modest and tidy with hot water heated by solar energy.

After a good night sleep, we went with Mr. Nip to a sandy island which is a reserve with a landmark indicating the physical northernmost point of China. The word ‘north’北 written in all styles can be seen in all forms. The Amur River (known as Heilongjiang黑龍江 in China) at this part is not wide and Russia is roughly 500m away on the opposite side of the river. The subarctic scenery is similar to those in Canada and Scandinavia with pine trees and beeches. The meadows are green and pretty with poppies. The air is fresh without pollution. One might not realize he/she is in still on Chinese soil.

The local tourism authority takes every opportunity to remind visitors that they are in China’s North Pole. There is a wonderful and most enterprising Santa Claus post office. We had an hour ride on the river looking at a Russian village from a distance. On the boat we met a Mongolian 蒙古族人 and a Kazakhstani塔塔爾族人who came from the Altay region in Xinjiang to see the festival. I told them I would be visiting the Russian part of Altay in mid-August.

After lunch, we took a rest as the sun was too strong. The temperature was over 30°C. We set off again after 3:30pm and went to a museum on the Tungusic people, one of the 56 minorities groups in China. We visited China’s northernmost observatory which says that there have been 19 occasions of aurora viewing in the past 49 years and it is unlikely to have aurora in January and the hot months of June and July. Wow! This means that the Northern Lights Festival is merely a gimmick and the chance of seeing aurora is almost zero.

We had a long walk enjoying the beautiful subarctic summer scenery which is not usually found in China. We bought a river fish and Kai had to go to the kitchen to cook it in our preferred style. We had a fantastic meal. But Mr. Nip found our cooking style without much salt and oil and no MSG tasteless.

After dinner, we went out for the sunset. But we saw nothing spectacular. We spent half an hour at the Santa Claus post office. The saleslady is very smart and showed us a postcard with aurora take by her former boss. I asked whether she had seen aurora. She said ‘yes’ but could not remember when. Replies from other locals are the same i.e. aurora is very beautiful with many colours. But no one can remember when he/she last saw it!

It was about 10pm when we walked back to the square where the Northern Lights Festival opening would be held in two days’ time. A dress rehearsal was on. The technicians were busy preparing for the laser show with images projecting onto the hills/cliffs on the Russian side. We watched till 11pm. For a few second, I thought I had seen a band of faint dusty cluster over the Russian settlement across the river similar to the aurora I last saw in Yellowknife, Canada.  This cluster moved a little and disappeared within 15 minutes. Was it an aurora of a very low level of activity? Was it my imagination? Had I taken my tripod, I could have taken a picture for verification purpose. It is a pity!

Tsui proposed us to watch the sunrise and we got up at 1:30am. Though it started to brighten up around 2am, we could not see the sun rising behind the hills on the Russian side till 4am. It was my longest wait for an unimpressive sunrise.I slept for three hours and had to get up to leave.

On the way to Mohe, Mr. Nip took us to see a Quangyin statute林海觀音佛像. We had a lovely stroll on a broad walk in a forest covered with white beech and pine trees. We visited the Lijingrong Memorial Hall李金镛祠堂. Mr. Li was in charge of mining during the Qing Dynasty.

We paid Mr. Nip RMB 300 to take us to the Yuantou Village 源頭村which means the first village on the Amur River (10th longest in the world). The river is formed when the Shilka and Argun Rivers merge and flows 2824km east into Sea of Okhotsk.  The small village with 20-30 wooden huts has kept its rustic appearance which may soon disappear. The locals are already busy in turning their houses into guest houses and restaurants.

When we arrived in Mohe around 3pm, Mr. Nip was told to drop us at a Muslim Inn which is a local guesthouse. It does not look clean and there is no attached bath or toilet. Even Mr. Nip found this unacceptable. As Ms. Wang had charged us RMB380 for a room, we expected a decent hotel. We complained and were taken to see another inn which was equally unacceptable. The room faces a construction site and people from outside can walk into the room. This hotel owner offered us a room for less than RMB80!

I called Ms. Wang to inform her that both places were unacceptable. I asked her to refund us the money i.e. RMB760 and we would look for our own accommodation. She understood my request and said she would come back quickly.

We did not hear from her for the next hour. In the meantime, we went to three hotels all of which were fully booked. Finally we found the last two rooms at the 4-star Golden Horses for RMB600 a room. After we had paid and moved in, Ms. Wang called to say she found us another hotel and refused to refund. We of course stayed in the hotel and decided to follow up with Ms. Wang later. I had a hot shower and treasured a comfortable clean bed after roughing out since leaving Hong Kong on June 16.  The air-conditioning did not work and they bought us a fan. Not unusual for a 4-star hotel in China!

At the buffet breakfast, I met a group of tourists from Hong Kong on the way to the Arctic Village for the festival and aurora viewing. A lady asked me anxiously whether I had seen aurora. I told her aurora viewing would be most unlikely based on the observatory’s data!

At 8am, Mr. Nip took us to “9 Bends and 18 Curves” which is basically part of a vast wetland. Then we visited a Memorial Hall 5.6火灾纪念馆 which commemorates a disastrous fire that took place in 1987 killing over 200 persons. 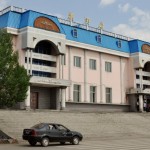 I met a local from Mohe in the train station who saw aurora once 20 years ago. Our train set off at 11am. As our train was not air-conditioned, we decided to pay an extra RMB100 each for a soft-sleeper软卧compartment with four bunks. The train was fairly empty as most visitors were in the Arctic Village or Mohe awaiting aurora on the Summer Solstice! Luckily, it was not hot once the train was moving.

The scenery remained the same: expansive lush green forest and plains, ranges of mountains afar, a cluster of houses and vast field under cultivation from time to time. We played mahjong again and I was the winner this time. Around 5pm, we had a good dinner for RMB150 with four dishes. We played another game of Mahjong before going to bed at 9pm.