My first overseas study trip to the UK in 1975 has wetted my appetite for travel.  In 1978, I made my second study trip with 11 social work classmates to India, Nepal and Bangladesh. It was an eye-opening experience. I always want to have a record of this memorable trip but my trip notes had long gone. During my stay in Vancouver, Paulina, Kong, Sam and I were chatting about our happy university days and this special trip. With their encouragement and their notes and photos, I have managed to revisit the 1978 trip to India, Nepal and Bangladesh.

Our 1978 social work class was small with only 30 students (six male and 24 female students). We had three placements in social welfare agencies or NGOs before graduation. Like most youth in those days, we were keen to understand social problems, see changes and development and travel. We also believed a visit to underdeveloped countries would be invaluable. Twelve of us decided to make a 26-day study trip to India, Nepal and Bangladesh visiting five cities namely Calcutta (known as Kolkata since 2001), Agra, Delhi, Kathmandu and Decca (present spelling: Dhaka).

We had 12 participants including 10 ladies (Angela, Caroline, Cecilia, Donna, Hela, Maria, Paulina, Rafia (who has been renamed Ruqaiya after her pilgrimage to Mecca), Sandra and I) and two men (Kong and Sam). Each contributed HK$3200 which paid for the airfare, lodging and other basic cost (Our starting monthly salary in 1978 was about HK$2000 and the exchange rate was around HK$5.5 to one US dollar). We paid for our trip from our own savings and from loans from our family and friends. We were very frugal and stayed at hostels or local inns.

We took our study tour seriously and spent considerable time searching for background information. We discussed the objectives, itinerary, budget and programme for months.  With assistance of local contacts in Hong Kong, we had our visit programme organised through the World Council of Churches which provided us with a co-ordinator/local contact who took care of us in each city.

Most of us had never travelled abroad. We could not afford it. We were therefore seen off by a large party of family and friends at the Kai Tak Airport. We all put on our yellow T-shirt and took endless pictures.

We flew with Air India and departed Hong Kong at 6pm. Upon arrival at the Calcutta airport, we were enthusiastically met by Raja, our local co-ordinator who is lively, friendly and welcoming (He has married a Hong Kong girl, lived in Hong Kong where their children were born. The family has immigrated to the States).  His friend Amin, Seema (an 18-year old middle school girl) and Hashu accompanied us throughout our stay in Calcutta. We stayed in a basic hostel in the middle of the town. Our first lesson was to learn to eat with our hands.

Calcutta, capital of West Bengal, was first established as a trading post in 1609 by an English merchant, Job Charnock. It remained the capital of Great Britain’s Indian Empire till 1911 when the capital was moved to New Delhi. It suffered from urban decay in the 1960s but has remained a vibrant commercial centre with imposing Victorian Gothic buildings, churches and boulevards.

After a healthy breakfast with banana and oatmeal, we set off for our first glimpse of the city. We made a stop at the Victoria Museum built with white marble.  I was not familiar with Indian history and only knew about Gandhi, hero and national father of India. During the trip, I also learnt another national hero i.e. Tagore, a most famous poet and Noble Prize laureate.

I did not know much about Calcutta. Indeed it was different from Hong Kong with many more old and dilapidated colonial buildings with fine architectural features. I watched the streetscape with curiosity: trams were running; garbage, vultures and ravens were everywhere. Lots of people were hanging out or begging in the streets. Roads were poorly maintained and the city was flooded after torrential rain. It was sticky and unbearably hot. 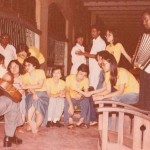 The first place we visited on this trip was the Calcutta Zoo. We saw white Indian tigers and elephants.  In the afternoon, we had an orientation session at the International Culture Association. Our friends sang Indian folk songs for us in the evening. 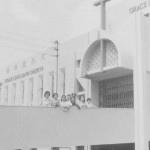 We visited Grace Ling Liang Church and met Mrs. Lamb, a Chinese lady and wife of a minister. Chinese immigrants began to arrive in the 18th century and many were involved with the shoe trade. They settled in Tangra which has become a China Town. After decades of dedicated work, they managed to set up a Chinese school with its own premises. She reminded us to work hard and had faith in God. 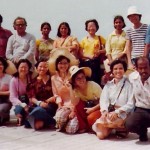 In the afternoon, we went to the Calcutta Metropolitan Development Authority (CMDA) to learn about the city’s urban development and planning. As Calcutta has been known for its slums, CMDA was set up with a mission to save and revitalise the city in decay. We had a guided tourof a shoe factory in China town which would be redeveloped, a slum with an improvement plan and the development plan for a Salt Lake new town which is quite far from the city.

In the late 1970s, the majority of the Indian population lived in the rural areas. Even today, the rural population accounts for about 70% of the total population. We were taken to a village to see a Socio-Economic Development Project (SEDP). For the first time in my life, I saw how dungs were dried in the sun for fuel. We had a delicious lunch with plenty of fresh fruits with the villagers. Though the people were poor and had nothing, they were nice and cheerful.

Indians love movies. We went to the cinema and saw a newly released movie called “The Red Bungalow”. Bollywood has overtaken America as the world’s largest film producer since the 1970s. 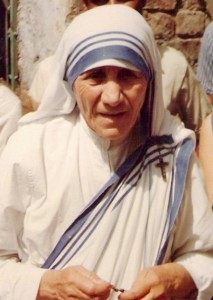 In the late afternoon, we went to the Home for the Dying and Destitute, a project run by the Missionaries of Charity found by Mother Teresa (1910-1997), a Roman Catholic nun of Albanian ethnicity and Indian citizenship. Born Agnes Gonxha Bojaxhiu, Mother Teresa arrived in India in 1929. Her noble aim was to help the ‘poorest among the poor” and founded the organisation in Calcutta in 1950 to care for the poor, sick, orphaned and dying.  Mother Teresa received a Nobel Peace Prize for her humanitarian work in 1979.

The home was basically a simple shelter with bare walls and concrete floor. It was hot and damp. There were rows of small wooden beds with sick and helpless patients and old people. I was shocked and felt sad and uncomfortable. (This image has stayed with me ever since). We also visited a nursery full of sick, handicapped and abandoned children next door. Mother Teresa and her helpers gave these children hope and a home of love and warmth.

I admire the dedication, devotion and work done by the nuns in taking care of the sick and dying in such poor conditions with little support. On our way out, we were lucky to meet Mother Teresa who just returned from her village visit. She was 68 years old then and we jumped with joy when she agreed to take a picture with the group.

We visited the famous Hindu Kalighat Kali Temple located on the banks of the river Hooghly (Bhagirathi). This temple is dedicated to Goddess Kali and is one of the most sacred pilgrimage destinations.  The image of Kali in this temple is unique with three huge eyes, long protruding tongue made of gold and four hands.

In the afternoon, we went shopping in the New Market, an enclosed market situated on Lindsay Street. It was a Gothic market complex first opened in 1874. A historic clock tower was added in 1930s. (In December 1985, a large portion of the original building was burnt down by a fire. The market has been rebuilt since with a new wing added).

We were thrilled by the atmosphere in the market. The vivid colours and scents of spices were captivating. Some of us decided to have a sari made. The colours are gorgeous and I had great fun in choosing the fabric. Our friends took us to a tailor and our sari was made in no time. I had my first and only sari in my life!

We had a briefing at the Calcutta Urban Service. In the evening, we went to a local nightclub to celebrate Angela’s birthday. We had folk dancing and Maria taught us the basic steps of Cha Cha.  We had fun and a great evening!

We went to a Student Health Home. Our second stop was at the Salvation Army where we were met by Major Gardina, a Brit from the UK. He was a huge fellow and was busy serving food to a long queue of able but unemployed men. (I saw a similar scene in late evening in 2010 near Trafalgar Square in Central London. In affluent societies today, there are also some able but unemployed men who need to be fed!)

In the afternoon, we visited the Institute of Social Service and had dinner with Raja’s family.  We were pleased to meet his mom and niece and had a great evening with authentic Indian home cooking.

We had a busy day. Getting up at 5:30am, we went shopping in China Town in order to treat our friend Amin and his family with Chinese cooking. We brought fish, meat and vegetables before heading to a suburb. We were not good cooks but managed to prepare a decent lunch under the excellent supervision of Sam and Caroline. The table was covered with many dishes including pineapple beef, tofu, scramble eggs with shrimps, spare ribs and vegetable soup. Amin’s family appreciated our efforts and enjoyed the food! We had a boat ride on River Howrah and sang our favourite group song “Our Motherland”.

We returned to the city to attend a church service accompanied by Mrs. Lamb. She gave us a lovely dinner. In the evening, we had our first evaluation meeting as it was our last night in Calcutta.

On our last day in Calcutta, I went shopping in the New Market again (I cannot recall what I had brought). We had dinner before departing for Agra by train at 8:45pm.

The train station was crowded, dark and dirty. Street paddlers sold food including deep fried dumplings on the platform. The strong oily smell permeated every corner of the station. (When I was taking the train from Agra to Delhi in 2005, I found the same atmosphere and smell though the building is newer and cleaner. Food peddlers are still allowed to make and sell dumplings in a wok with boiling oil).