Known as Victoria Falls in Zimbabwe and “Mosi-oa-Tunga”(the Smoke of Thunders) in Zambia, this legendary waterfall at the border of Zambia and Zimbabwe is one of the world’s natural wonders: the largest waterfall spanning 1,708m with a height of 108m.

I got up before 6am after a decent sleep despite worries about my flight ticket to Victoria Falls (Vic Falls), Zimbabwe. I took the 7:15am shuttle (R200) to the airport with Muna, Otto, Sigrid, Ian and Gevon. The moment of truth came when I scanned my passport and got my booking details on the screen. So I did book a ticket but nothing had been sent to me! Otherwise, I would have taken a picture of the details with my cell phone.

The Johannesburg airport is fairly modern and efficient with many lounges that I can use my Priority Pass. I had a good breakfast and used WhatsApp to communicate with Frank, husband of Thandi’s niece in Vic Falls who would pick me up for US$25 (the official currency for the government). The flight was full and took off just before 11am. I was the first one to come out and was pleased to see Frank at the arrival hall.

Frank is in his late 30s with two children. On the way to the Shoestrings Backpackers, he took me to his house to meet his young boy. It’s nice to visit a village and see a normal house with 2 bedrooms. I gave him the stuff Thandi had brought for her 3-year-old daughter who is staying with her sister some 400km from the Vic Falls. The town has grown a lot with more hotels, eateries and souvenir shops since my last visit with Lillian in the late 1990s. The park looks the same though the entry fee has gone up to US$30. A very basic single room in a backpacker hostel cost me US$50 while an average hotel room would be over US$100. Vic Falls is touristy, expensive and not value-for-money.

Zambezi River, upstream from the falls, experiences a rainy season from late November to early April with the flood season from February to May. David Livingstone (1813-1873), a Scottish Congregationalist pioneer medical missionary, a scientific investigator and explorer and anti-slavery crusader, is believed to have been the first European to view the waterfall on November 16, 1855 from what is now known as Livingstone Island.

The main streams are named in order from Zimbabwe (west) to Zambia (east): Devil’s Cataract, Main Falls, Rainbow Falls (the highest) and the Eastern Cataract with about two thirds of the falls (including the classic Main and Rainbow Falls) lying in Zimbabwe. The spray from the falls typically rises to a height of over 400m and is visible from up to 48km away. Both countries have designated the area surrounding the waterfall as national park: Victoria Falls National Park is 23 km² while the Mosi-oa-Tunya National Park in 66 km².

I spent over two hours in the Victoria Falls National Park which provides a walking trail with 16 points of interest. During the flood season, it is impossible to see the foot of the falls and most of its face. The walks along the cliff opposite the waterfall are in a constant shower and shrouded in mist. 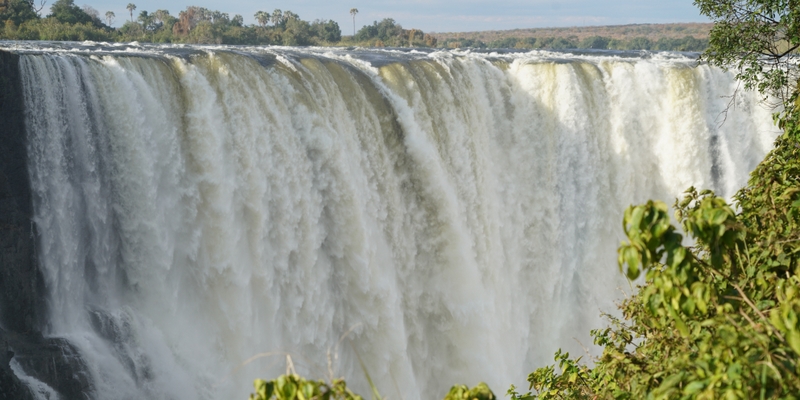 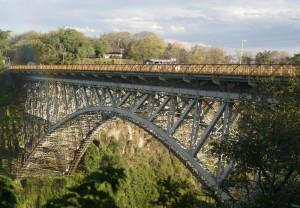 I was soaking wet and cold at the end of the walk. It is not safe to walk after dark. I was glad to arrive at my hostel around 6pm. I was hungry and had a traditional beef stew (US$4) for dinner.

Malaria is a serious problem in Zimbabwe. As I am an easy prey, I have to take preventive measures including putting on long-sleeved shirt and pants and taking anti-malaria medication. After dinner, I returned to my room and stayed inside the mosquito net. As a result, I slept at 8pm and got up before 4am!

As a Hong Kong SAR passport holder, I do not require a visa for both Zimbabwe and Zambia. Having visited Vic Falls in Zimbabwe twice, I decide it’s time to see the falls from the Zambian side. I walked about 2km from my hostel to the border, crossed the Victoria Falls Bridge and walked for another kilometre to reach the Mosi-oa-Tunga National Park.

The Park entry fee is US$20 (or 200 pula). There are four hiking trails and the most interesting one is the trail that takes visitors across the Knife-Edge Bridge for close-up views of the falls, the Victoria Falls Bridge and the second gorge and a rainforest walk.

Close to the edge of the cliff, spray shoots upward like inverted rain. The walk in the rainforest is pleasant and the falls with double rainbows are beautiful. I was soaked from head to toe despite my 20-year old rain jacket.

The Zambezi River Trail is short and easy with a full view of the Knife-Edge Bridge and good side view of the main falls. Here I ran into Sigrid and Otto who were staying in Livingston. As a result, I had a free ride with them and spent an afternoon in Livingston.

I followed the Boiling Pot Trail down to the river (an elevation of 629m). I walked very carefully and was glad to meet a young student from the UK. He gave me a hand when climbing over some big boulders. The view of the boiling pot, the river, the Victoria Falls Bridge and buggy jumps from the bridge are fantastic.

The Photography Trail is 788m-long along the edge of the second gorge. As Otto had arranged their taxi to come at 1pm, I gathered I would not have enough time to do the walk. But the driver was late by 10 minutes: I could have completed the walk and seen the falls from all angles! What a pity!

Livingstone lying 10km from the falls was established in 1904 and has been significant to the history of colonial rule in Africa and its eventual independence. When the capital moved to Lusaka in 1935, it fell into disrepair and has only risen again owing to tourism. The leafy town studded with colonial buildings and a population of about 140,000 (2010 census), is pleasant and tidy. I like the laid-back and nostalgic atmosphere.

We first had a coffee and a light lunch in a cafe by the main road. Then we walked to the Livingstone Museum which has several rooms with exhibits on archeology, anthropology, politics and history. Of course, there is a large room on David Livingstone and his three exploration journeys in Africa during his stay in Africa from 1840 to1856, 1858 to64, and 1866 to his death in 1874).

I want to visit the Royal Livingstone Hotel next to the falls before returning to Zimbabwe before sunset. Otto’s driver picked me up at the Museum at 3:30pm and I had a most enjoyable drink in the manicured lawn of the hotel by the Zambezi River with a view of the waterfalls. I can’t believe a beer at this 5-star historic hotel is only US$2 – the same price I pay for one in my hostel in Vic Falls. The sunset view of Zambezi River is fantastic: I would stay here if I return to Vic Falls one day! 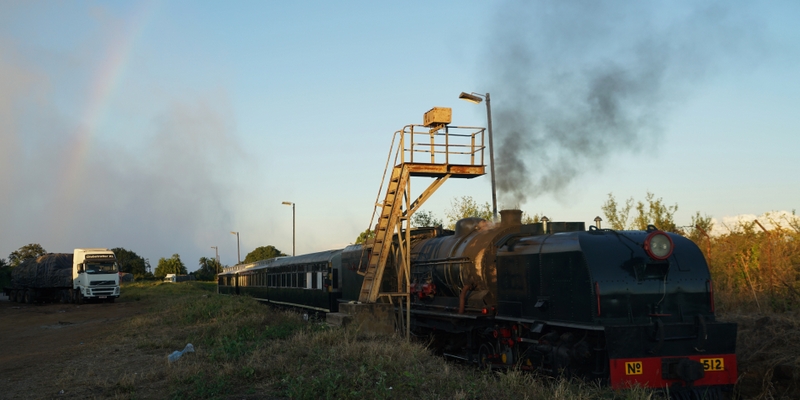 Back to my hostel at 6pm, I had a chicken stew with rice. Once again, I returned to my safe haven inside the mosquito net by 7pm. In this way, I had few mosquito bites in this malaria-infested country.

Posted under My Africa trips
Comments Off on Victoria Falls May 26-27, 2016