5 Days of Wedding Celebrations and Family Reunion on Providenciales, Turks and Caicos Islands

I took my first sailing trip from Guadeloupe to Antigua in 1990 and visited a dozen of islands in the Caribbean on five occasions between 2001 and 2010. I had never thought of Turks & Caicos until I received a wedding invitation from Joyce, daughter of Ricky (my cousin). The Caribbean The word “Caribbean” has multiple uses. Its principal ones are geographical and political. It is a region southeast of the Gulf of Mexico and the North American mainland, east of Central America and north of South America. It  consists of the Caribbean Sea, its islands and the  surrounding coasts. All these islands at some point were and a few still are colonies of European nations; a few are overseas or dependent territories.

Turks and Caicos Islands (or TCI) are a British Overseas Territory consisting of the larger Caicos Islands and smaller Turks Islands which are separated by the Turks Passage. TCI were claimed by several European powers with the British Empire eventually taking control.

The two main islands groups with eight main islands and some 300 smaller islands have a total land area of 616 km² consisting mainly of low, flat limestone with extensive marshes and mangrove swamps and beach front.

The Turks Islands have two main inhabited islands (Grand Turk, the capital since 1766 with a population of about 5,000 and an area of 18 km² and Salt Cay). The islands are known primarily for tourism and as an offshore financial centre. The main natural resources are spiny lobsters, conch and other shell fish. 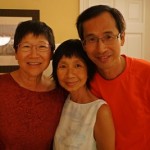 I come from a relatively small family. The first generation comprises three brothers including my father. The second generation has ten members (Wini and Geoffrey from my first uncle; Alan, me and Lawrence from my father; and Ricky, Alan, Betty, Keung and Mei Sum from my third uncle). The third generation includes ten grandchildren and the fourth generation has now got three boys aging from four years to three months’ old. Today, my extended family has 41 members spreading over Australia, Hong Kong and North America.

Upon receipt of the wedding invitation from Joyce and Ethan, Lawrence who has recently retired and I decide to go. Eventually, a total of 19 members from the four generations including spouses and great-grandchildren have turned up. The eldest is my third uncle’s wife from Hong Kong and the youngest is Tyler, Teresa’s 2-year old son from Boston.

There is no direct flight from Mexico to Providenciales. I had to fly from Mexico City to Miami on November 4, meet up with Lawrence and Sally and spend a night near the airport. The US immigration service is known for its poor service. This time, I was shocked to find most of the immigration counters at the Miami Airport close at 8 pm. It took me over an hour to go through immigration. The only places I have experienced similar delay and problems are in Africa!

My friends, Crystal and Michael who have been looking after Lawrence and Sally in Miami took three of us to a Peru restaurant for dinner. It is great to see them again and the food is excellent.

On November 5, Lawrence, Sally and I got up early and took a free shuttle from the hotel to the airport. We arrived in Providenciales by 1:30 pm and were greeted by Ricky and Alan whom I visited last year in North America.

I enjoy staying in local areas which give me a local favour. The owner Lynn, a young lady from Yorkshire, is a dog lover and keeps two big dogs of her own. In addition, she is looking after half a dozen homeless puppies. The strong odours put me off. Luckily, Lynn keeps all bedroom doors closed and I can flee the awful smell as long as I stay inside my room.

November 6 Friday: Wedding Rehearsal and Dinner on the Beach

We rented a car and spent the morning driving around the northwestern part of the island. Owing to heavy rain the night before, our small car had to turn back on the road to the northeastern side.

We moved on to the Chalk Sound National Park near the airport. The island is famous for its conch which is delicious and tasty. We  enjoyed watching birds and the lovely beach while having a light lunch at Conch Shack.

After lunch, we made quick stops at Thomson Cove and Turtle Cove on our way to the Regent Palm for the wedding rehearsal and informal BBQ dinner on the beach. Geoffrey who fled from Hong Kong missed his connecting flight in Los Angeles on November 5 finally arrived today. Hence, eight members of the second generation had our first picture together!

We had a good time. On the way home, one of the tyres burst. Luckily a local passed by and helped Lawrence change it. We got home safely.

The ceremony would take place on the beach at 5:30pm. We had a full day for sightseeing. But the most important thing to do was to get the tyre fixed. Then, we explored the eastern and southern side of the island with a stop at a Conch Farm and the Long Bay Beach.

Around 2 pm, we returned to Alan’s suite at the Sands for lunch. We had brought two groupers, a pound of conch and some lobster tails. The best way to cook fresh seafood is to have it steamed or boiled. We indeed had a most wonderful seafood lunch!

Later, Lawrence, Sally, Keung and I went snorkelling in Coral Garden nearby. I saw a lion fish, two turtles, groupers and several types of common coral fish in murky water.

By 5:30pm, we all assembled at the beach for the wedding ceremony. The sun was setting providing a romantic backdrop. Joyce looks most beautiful in her ivory wedding gown. Ethan and Joyce got married in the presence of some 50 family members and friends. Afterward, we had a cocktail by the poolside before the formal dinner.

It’s a wonderful evening filled with sweet memories. Joyce and Ethan are wonderful and Ada and Ricky (Joyce’s mom and dad) could not stop smiling the whole evening. We all got up to dance. After the dinner, we accompanied the couple to their honeymoon suite!

I like to see a place as much as possible. Hence I cannot leave Turks and Caicos without going outside Providenciales. I therefore took the 8:30am ferry to Sandy Point on North Caicos. The return ticket costs $50.

There is no public transportation: visitors have to either rent a car ($65 for a day) or hire a guide and driver.  The road running from Sandy Point to Calorimeters Landing in Middle Caicos is fairly good. As I have left my driving license at home, I had to pay $130 for a driver who is called ‘Sexy’. He is 37 years old but does not look sexy at all.

We first drove through North Caicos with a stop at Cottage Pond which is more than 260ft deep with lush vegetation and native birds. We drove past the Village of Sew, Wades Green Plantation which gate was locked, the Village of Whitey, the Village of Bottle Creek and the Flamingo Pond. The houses here look basic and smaller as compared with those in Providences. There are several resort developments but few tourists and cars on the island.

The we proceeded to Middle Caicos which is connected to North Caicos by a causeway. Muddying Barbour & Dragon Cay have been described as the most beautiful spot in the Turks and Caicos. There is a trail from the Blowing Hole to the Daniels Cafe. I had a short walk around the Muddying Barbour and the beautiful deserted beach looking at the Blowing Hole and the Juniper Hole.

The last stop was the Conch Bar Cave which charges $10 entrance fee. This cave system includes over 15 miles of above-water caverns. I walked less than a kilometer inside the cave which is dark and slippery. Am I impressed? Not really!

I saw five flamingos when crossing the causeway. I asked Sexy to drop me at a beach close to the ferry pier so that I could take a short walk. Sexy told me that boat would be leaving at 1:30pm. He was lying: the incoming boat would be arriving before 1:30 pm while the boat back to Providences would not leave till 2:30 pm. He just wanted to get rid of me before 1:30 pm in order to pick up another customer. While I was waiting, I was badly bitten by sand flies: I had over 250 bites on my neck, arms, feet and legs. It’s itchy waking me up around 2-3 am for a week. The worst souvenir and memory I can have from Turks and Caicos.

Tonight, we had a dinner party at Alan’s suite. All children from my third uncle are good cooks. They prepared excellent seafood with groupers, conch and lobster tails. We also had spaghetti, cheese, chicken and plenty of wine.  Ricky also arranged a birthday cake for Lawrence whose birthday falls on November 7. An awesome and moving occasion!

A long travel day. As the plane would take off for Miami at 2:30pm, Lawrence, Sally and I explored the south side of the island which is filled with expensive houses and new developments. We also saw five colourful flamingos.

Lawrence, Sally and I would be leaving together for Madrid where we would spend two nights together. Then I would fly to Venice while they would take a Mediterranean cruise. We would meet up again in the UK in mid December.  Things went smoothly. After spending a couple of hours at the Miami Airport, our plane for Madrid took off on schedule around 6pm.

I am not crazy about ‘sun and beach’ or resort holiday. Turks and Caicos Islands would not be on my list had it not been for the wedding and family reunion. I should thank Joyce and Ethan for giving the extended family a chance to get together. I wish them happiness and good luck.

The family gathering is most memorable. My cousins are fantastic and sweet. Though we seldom meet up, we are fond of each other. As we grow older, we become more attached to our family: we all hope to meet up more often. One suggestion is for Wini and Bob to celebrate their anniversary in Vancouver Island in a few years’ time. A great idea!