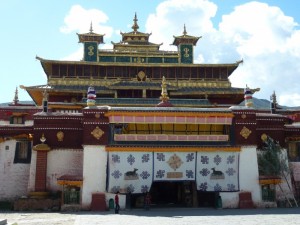 After my eventful and unforgetable journey to Western Tibet, I had a pleasant trip to the Shannon Prefecture with five social workers from Hong Kong before taking a 8-day journey from Lhasa to Chengdu on the Tibet-Sichuan Highway with a side trip to Daocheng and Yarding.

September 9-10: Shannan Prefecture
My new friends from Hong Kong whom I met at the hotel wanted to hire a car to visit Shannan山南, Mt Qomolangma (Mt. Everest) Base Camp and Namtso. I introduced them to Xiao Jiao. They invited me to join them to Shannan.

We set off at 9:30am and drove along the Yarlung Tsangpo River雅鲁藏布江. We arrived at Tsetang泽当 (3100m), the seat of the prefecture, around noon. As the Samye Monastery桑耶寺 is 35km away, we thought we could get there for lunch. Unfortunately, there was construction work on the bridge outside Tsetang crossing theYarlungRiverand no traffic was allowed. As a result, we had to make a detour taking an extra hour to reach the opposite side of the bridge. It was most frustrating. We also did not have lunch till 4:30pm.

During our two-day stay in Shannan, we visited four attractions.

Tashi Duka Monastery is small and dilapidated. Tsongkhapa stayed there before moving to the Gandan Monastery甘丹寺. The path is again under construction and we took some 20 minutes to walk to the monastery.

Samye Monastery was Tibet’s very first monastery founded by King Trisong Detsen赤松德赞 probably between 765 and 780. Tibet’s first seven monks七觉士 were ordained here by the monastery’s Indian abbot, Shantarakshita静护. Indian and Chinese scholars were invited to assist in the translation of Buddhist texts into Tibetan. Samye has been damaged and restored many times. Extensive restoration work has been going on since mid 1980s but the expansive monastery looks quite run-down.

The monastery was designed and created in accordance to the layout of the universe 大千世界 from the Buddhist viewpoint. Its central hall symbolises Sumeru须弥山 encircled by four great continents and eight lesser ones, sun and moon chapels and four pagodas. The Utse乌孜大殿 (the central building) comprises a synthesis of architectural styles. The ground and first floor were in Tibetan style, the second floor Chinese and the top floor Indian. We visited the assembly hall经堂, Jowo Chapel主殿祖拉康, Samye’s most revered chapel, the Chenresig Chapel. On the second floor, there are images of Guru Rinpoche莲花生大师, Shantarakshita静护, Trisong Detsen赤松德赞 and Sakyamuni. Murals outside this hall are impressive. There are also a four huge chortens (red, black, white and green), one at each corner. In the assembly hall, some 50 monks were praying and chanting with butter lamps in flames. It was most atmospheric. The session lasted for over an hour. 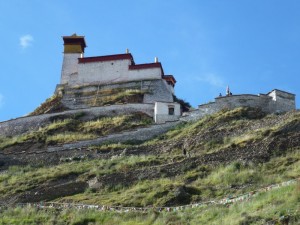 Yumbu Lhakang Castle雍布拉康, perching on a ridge overlooking the Yarlung Valley, plays an important role in Tibet’s history and culture. It was built by Nyatri Tsanpo聂赤赞普, the first Tibetan king in the 2nd century BC. The present structure is dated from 1982. The ￥60-entrance fee to a small chapel is outrageous. There is really nothing much to see. A man in the chapel hinted that I could go in for ￥30 without a ticket. I paid for a ticket instead of giving him a chance to pocket the money. I hope the relevant authority would take action to stamp out such illegal activity. A fee of ￥10-20 would be more reasonable for this chapel 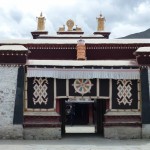 Traduk Temple昌珠寺 was one of the 12 temples built by the Tibetan king Songtsen Gampo松干贊普in the 7th century. It was also the summer residence of this king and his Chinese consort Princess Wencheng文成公主. The temple is famed by a thangka of Drolma (Tara) studded with 29,000 pearls. 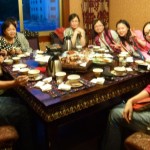 I returned to Lhasa after lunch. I took a shared taxi which cost me only ￥70. The driver drove very fast and I was back in Lhasa before 5pm.

At the hotel, I met another eight travellers from Hong Kong. We went for a sumptuous Tibetan dinner which only cost us ￥700.

September 11-18:  Lhasa to Chengdu on the Sichuan-Tibet Highway

I have been fascinated by the Sichuan-Tibet highway which is said to be dangerous but has stunning landscape and scenery. There are two main routes: the southern route travelling along Highway 318 is 2100-km long while the northern one is 2400-km long (to verify). I shared a 4-wheel drive with three Mainland tourists. 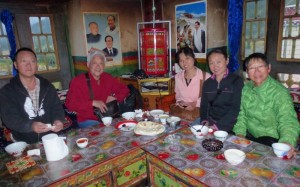 Driver Xu and his 4 passengers

Our driver Xiao Xu小徐 picked me up at 6am. He is 45 years old, a nice guy and good driver. The other three passengers included Mr. Wang, a 66-year-old schoolmaster and his two former students. All four of us are now retirees! 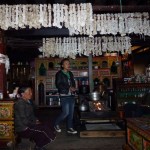 When I joined a 4-day tour to the Ranwu Lake然烏湖 in May, I travelled along the same route. As it was a rainy and misty day, I hardly saw anything. Anyway, I found the spring scenery in May more beautiful.

We had lunch in Nyingchi (Linzhi) and arrived in Lulang at 4pm. The valley looked golden and the barley was ready for harvest. We stayed in a nice family inn and I slept like a baby.

It was the Mid-Autumn Festival. The weather was not good: cloudy, rainy and misty. We had a Tibetan breakfast with homemade yogurt, bread and tsampa. We set off at 8:30pm. There were few cars on the road possibly because people were celebrating at home. There was no congestion even at the dangerous section from Pailong排龙 to Tongmei通麦.

The other Mainland tourists were very frugal and were not interested in most of the attractions along the route. They however decided to visit the Midui Glacier米堆冰川. I went in for the second time. Some leaves already turned yellow. As a whole, I find the May scenery and colours more refreshing.

The weather improved after lunch. There is no more snow-topped mountain surrounding the RanwuLake. But it remains photogenic. The landscape changes after the Ranwu town as we entered the Qamdu昌都 prefecture. The road cuts through narrow gorges with brown and reddish rocky cliffs void of vegetation. It looks surreal and beautiful! We arrived at Baisu around 7:30pm.

We had a late start at 9:30am. The landscape with mountains in all shades of brownish, greenish and reddish colours dotted with picturesque Tibetan houses and golden fields is enchanting. We had spectacular views at the confluence of Nujiang怒江 and the Baisu River and crossed the Nujiang Bridge.
We drove along a winding road with over 70 bends and finally arrived at Bamda (4400m) for lunch. The drive to Zongong is relative short with just over 100km and we arrived at 3:30pm.

Our nightmare began: the long stretch of Highway 318 from Zongong, Tibet to Xinduqiao新都桥, Sichuan is mainly a dirt road which is under construction or repair. (I estimate that we drove some 800km on bumpy road).

In order to reach the Dongda Pass东达山囗 (5008m) where cars can be held up for hours, we set off at 5:30am and got over it before 7am. We saw Lancangjiang 澜沧江 (which is also known as Mekong River湄公河)  and had lunch at Markham芒康 which is in beautiful valley. It is now a transportation hub with one road leading to Sichuan and another toYunnan. I am glad that I did not have serious back pains after the long drive.) 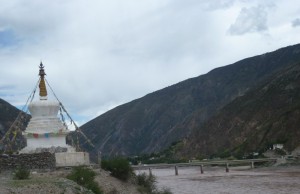 After lunch, we had a short drive and reached the Jinshajiang River金沙江，the border between Tibet and Sichuan. We crossed the bridge, drove another 32km to reach Batang巴塘 at 3:30pm.

This is my longest and most unforgettable stay inTibet. I have travelled some 600km by railway and over 4000km by road. I am glad to have Brenda travelling with me on this special trip which is an adventure and a journey of discovery. I am thrilled to have a chance to visit Mt Kailash, the three holy lakes and the main temples and monasteries that are revered by the Tibetans.

Tibethas most stunning landscape and scenery. I am lucky and have not suffered from altitude sickness. Hence, I have been able to complete (almost) the Mt Kailash kora and walk around most part of Lake Manasarovar. A drive from Gar in Western Tibet toMarkham inEastern Tibet and along the Himalayan foothills is a wonderful way to fully appreciate its magnificent landscape and outstanding natural beauty.

I am most impressed by the stunning scenery and cultural treasures at Zada. I believe the earth forests, the Tholing Monastery and ruins of the Guge kingdom at Tsaparang should be listed as a mixed site for their natural, historical, cultural and religious value on the World Heritage Site list. But given the present condition at the Tholing Monastery and Tsaparang, a lot of careful planning and well-designed restoration work needs to be done. I hope both the relevant authorities are working towards this goal.

The caves in Piyang and Dongga are also interesting (though the scale is nothing compared with Dunhuang). But these two places are much neglected. It is depressing to see the empty hall in Piyang with thousands of ancient pecha scattered all over the place. They are treasures and should be preserved. If there is anything I can do to help preserving and restoring the Tholing Monastery and Piyang treasures, I would be delighted to do so.

The Ngari prefecture will soon become a new off-beat destination for the savvy and adventurous travelers when this region is more accessible. An airport, 40km away from Gar has opened since July and the new highway from Ba’er to Zada is near completion. I was told that the improved highway to Xinjiang will be completed in a few years’ time and the railway might be extended from Xigase to Ngari. The Lhasa-Xigase line is already scheduled for completion in 2013.

During this long journey, I am irritated by four basic things. First, the standard and management of most public toilets is unacceptable. In Namtso, there are toilets that are locked up. The guesthouse keeper just told us to piss on the beach. The public toilets in Zhongba are most disgusting and are hotbed for disease.Chinacan construct the highest railway in the world and has developed some technically advanced devices. Can it build toilets that are affordable and hygienic? Also when will the people learn how to use toilets properly?

Second, drivers in the Mainland tend to drive fast in the middle of the road.  Such practice is dangerous. Third, men smoke heavily and I have not found smoke free areas in hotels and restaurants. Drivers should not smoke while driving and the government should consider requiring restaurants and hotels provide smoke-free rooms/areas. Fourth, people litter. I realize it takes ages to change attitude and habits. The government must take a lead and get something done!

Posted under My China trips,Trekking
Comments (2)