Aurora is fascinating and bewitching. After my first visit to Yellowknife for aurora viewing in March 2012, I vow to return. When Karen, my friend for over 40 years, took her friends to Yellowknife to see autumn aurora for the second time, I decided to join and asked my friends Bing and Kylie to join. I spent six fantastic nights in the Enodah Trout Rock Lodge.

I got up very early and took the 6:17am Sky Train ($2.75) to the airport. I met up with Karen’s party (Tony, her mom and godmother and eight friends from Hong Kong). The plane departed on schedule at 8:20am.

Around 1:30pm, our party of 13 landed in Yellowknife. Angela and CK, the owner of the Yellowknife Tours (www.yellowknifetours.com) and their daughter, Verda met us on arrival. They gave me a big hug. We had a buffet lunch and city tour in the afternoon.

Yellowknife by the Great Slate Lake in the fall is pretty.  We had a quick tour of the Legislative Assembly, the Prince of Wales Heritage Centre and the Visitors’ Centre before boarding a sea-plane at 5:30pm.

We were met by Ragnar, owner of the Trout Rock lodge. He remembers me because I came with a Miss Hong Kong in 2012. Ragnar remains humorous, attentive and most efficient. The lodge has grown since my last visit: Marla and her two assistants are in charge of catering while Chris, Vincent and Norm run the expedition programme.

A typical 4 day – 3 night package includes two days of activities. Guests take a boat trip to Wasp Island for fishing and berry picking, to Ragnar Island for lunch and Miner Bay to chisel amethyst (a purple crystal) and a 3-hour guided walk on Enodah Island. Guests can stay up the whole night watching aurora.

The lodge has seven cabins. For the first three nights, there were a total of 17 guests (four Japanese (Tomoko, Miyo and an elderly couple) and our party of 13). After  Karen’s friends left, my friends Bing and Kylie, a couple (Cathy and Denis) and a photography group of 15, all from Hong Kong arrived. 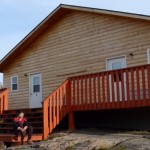 Karen, Tony and I stayed in Cabin B (with 4 beds) for six nights. Karen’s friend Ho took up the fourth bed for the first three nights. After his departure, Bing and Kylie stayed with us. I managed to get an extra mattress and slept on the floor. No problem!Aurora Viewing

The main attraction here is aurora viewing in wilderness. The lodge located on an island in the Great Slate Lake far away from the city without light and sound pollution. It is an ideal (though expensive) place to watch the mystical aurora!

Formation– Aurora are one effect of energetic particles, which can speed out from the sun both in a steady stream called the solar wind and due to giant eruptions known as coronal mass ejections or CMEs. After a trip toward Earth (150million km) that can last two to three days, the solar particles and magnetic fields cause the release of particles already trapped near Earth, which in turn trigger reactions in the upper atmosphere in which oxygen and nitrogen molecules release photons of light. The result: the Northern and Southern lights (Source: www.nasa.org).

Colours– The colors most often associated with the northern lights (aurora borealis) are pink, green, yellow, blue, violet, and occasionally orange and white. Typically, when the particles collide with oxygen, yellow and green are produced. Interactions with nitrogen produce red, violet, and occasionally blue colors. The type of collision also makes a difference to the colors that appear in the sky: atomic nitrogen causes blue displays, while molecular nitrogen results in purple.

The colors are also affected by altitude. The green lights typically in areas appear up to 150 miles (241 km) in altitude, red above 150 miles; blue usually appears at up to 60 miles (96.5 km); and purple and violet above 60 miles. These lights may manifest as a static band of light, or, when the solar flares are particularly strong, as a dancing curtain of ever-changing color (Extracted from www.auroravillage.com).

Viewing– The lights are always present, but winter is usually the best time to see them, due to lower levels of light pollution and the clear, crisp air. September, October, March and April are some of the best months to view the aurora borealis. The lights are known to be brighter and more active for up to two days after sunspot activity is at its highest.

It comes in a variety of shapes: curtains, ruffles, bow, twist, band, whirlpool, corona, crown, pillar and arch. But there are never two auroras of the same colour and shape. The aurora break-up comes with amazing speed and makes the night sky dance with awesome beauty.

Aurora activities from September 14 to 19 during my stay at the lodge were good reaching Level 5 (the highest level using the rating at Aurora Village on September 15 (11pm to about 4am) and 18 (10pm to 2am). Unfortunately, I went to bed after 2am on September 15 thus missing the best part of the show.

Enjoyable Stay in the Lodge

I spent two freezing nights without shower in the lodge in March 2012. This time I stayed for six nights enjoying autumn foliage and aurora and taking a hot-tub by the Great Slate Lake!  Apart from the raining day on September 19, we had fine weather and starry nights.

Life on Enodah can be as busy or laid-back as you like. As a nature lover, I took every opportunity to enjoy the pristine nature and wilderness.

My old friends and new acquaintances have made my stay most memorable and enjoyable. 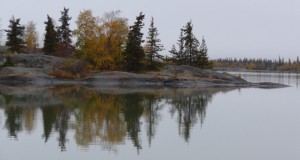 The sky was grey. As there was no wind, the lake was as flat as a mirror. I stood by the pier enjoying the solitude and reflections of trees on the lake for the last time. The rock outcrops, mirror-lake and stillness in the air created a Zen feel of eternity and unworldly beauty.

I gave Mala a big hug. Before boarding the sea-plane, Ragnar said he would find my smartphone one day. I promised to return to pick up my phone. But I told him to take it easy: my smartphone might wish to stay in this paradise forever!

Angela took us to the old town which is picturesque with colourful wooden and boat houses and golden tress. The autumn scenery is totally different from the white world in March 2012.

Bing and I departed together for Toronto at 2pm. We said good-bye to Karen and Tony in Edmonton who took another flight to Vancouver. We finally arrived in Toronto at 10pm.