June 26 Thursday: No Where to go BUT SOUTH

I was exhausted after an exceedingly long day at the Pole and did not get up till 8:30am. After a quick breakfast, I attended Colin’s lecture on ‘The Varied Glacial landscapes of Russia’. I have been to Russia many times and his lecture about the topography and landscapes of Russia including the Ural and Altai mountain ranges and the Kamchatka Peninsula, helps me trace my footsteps across Russia which spans through 11 time zones. I gain a slightly better understanding of the world’s largest country.

At 11:30am, we had to attend a mandatory briefing. The weather was stable enough to enable the helicopter to resume the scenic flight. Group 6 was arranged to fly at 2:30pm. This flight was better than the first one as visibility was better (though not brilliant). I took a couple of photos of the icebreaker.

After the scenic flight, I went to watch the second half of the film ‘Flight of the Eagle’ on Salmon Andree’s 1897 Swedish North Pole expedition in a hot air balloon. I missed the first half and only saw how the balloon came down and the fate of the trio who all died in a small island. Their body was discovered some 30 years later and their story unfolded as their journals and films had been safely stored in a sealed cylinder. How incredible!

There was another mandatory briefing on helicopter and zodiac landing at 4:30pm as we would be landing in the Franz Josef Archipelago the next day. After the re-cap, we had a special North Pole dinner with lobsters.

Solan gave a talk in the library on how he spent a summer at the South Pole Station as an ironworker more than ten years ago. I wish I had an opportunity to work as a volunteer and spend some time in the Antarctica too!

Polar bears despite their innocent look are extremely dangerous. As bears are found all over the Arctic, a few bear guards from the Russian Arctic Parks authority were travelling with us. This morning we had a briefing by one of the guards who explained the mission and objectives of the authority which has a short history. Their job is to protect the bears from people and visitors from the bears.

Later in the morning, Bob gave us a lecture on ‘Franz Josef Land; A Geographical and Historical Introduction’. His talk gives me some ideas about the place and the footsteps of Arctic explorers in the region. This prepares us for our first landing at Cape Norway.The sea was fairly icy and the icebreaker made steady but slow progress.  We did not approach Jackson Island till early evening. Just before our daily re-cap, we heard that a bear was in the vicinity. We all rushed out with our camera and watched it walking and swimming for over 15 minutes. 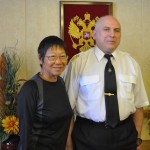 Half way through the re-cap, I had to leave as I was invited to join a reception hosted by Captain Davydyants in his salon. He has been working on icebreakers for over 25 years and is very experienced. His proudest moment was when the icebreaker carried the Winter Olympic torch to North Pole on October 13, 2013. Photos of this special occasion fill the wall of his salon.

On the way to Cape Norway on Jackson Island, we saw 14 walruses including half a dozen pulps on floating ice. We had an early dinner at 6pm and I was the first passenger stepping into a zodiac. I set foot on Cape Norway just after 10pm.

Bob was standing next to the site of a hut where Fridtjof Nansen and Hjaimar Johansen spent the winter of 1895. A large wooden beam which was part of their hut is still lying there. Their voyage on Fram from 1893 to 1896 is famous: the two explorers continued south after Cape Norway and were rescued at Cape Flora in 1896. We could only wander around in a small area under the watch of the bear guards.

After having spent seven days on sea, I treasured every minute on land.  I got back to the boat just before 11:30pm. Another long day!

I was tired but could not sleep: both the room and the quilt were too hot for me. If I opened the window widely, it was freezing. At the end, I preferred to sleep in my own down sleeping bag with the window wide open. I felt better but my cough and voice got worse. Something was wrong!

I woke up feeling not too well: I had lost my voice! We arrived at the Calm Bay where the first Russian Polar Station was founded in 1929. Named after Georgiy Sedov, the station was opened continuously till 1963. Now it is occupied during summer months by teams of biologists and conservators of the historic ruins.

The helicopter first dropped the working team who would be spending the next few months in the station and their provision in the Bay.  The expedition team checked the ground condition and decided not to land. Apparently parts of the Bay was covered by deep snow coming up to the waist. The weather had also changed with mist and low clouds setting in.

The next stop was the Rubini Rock nearby. This famous massive columnar basaltic rock is a nesting place for vast number of kittiwakes and guillemots. I watched the rock from both the bow and the top deck. But it is impossible to take good pictures of the birds perching high on the rock with my camera.

Then we had the best bear live show of the journey. A polar bear was first sighted when it was stocking seals from a great distance. It was so far away that I did not bother to stay on deck to watch it. Then while I was having lunch, the bear came close to the boat. I rushed out again with my camera.

A young curious and hungry male bear of 3-4 years old walked up and down the port side of our boat for almost half an hour. It stood up twice and couched on the edge of a massive floating ice watching us. He looks really cute!

But someone threw a pack of yoghurt and an orange at him. He sniffed and tried to bite. At the end, he walked away without swallowing them. Thank God! The plastic container can kill it! (We later learned that the unacceptable behavior had been captured by the video and this serious offence would be thoroughly investigated). I was lucky and took a couple of nice close-up photos of the bear which walked away after 1:30pm.

Cape Flora was the third and last landing site for the whole trip. The weather was not good. Luckily it  improved and we had good views of the some of the islands of the archipelago around 6pm. As it was too icy to launch the zodiacs, we had to land by helicopter. The first passenger flight began around 7:30pm and my group did not fly till 9pm. I spent over an hour at Cape Flora.

The scenery is spectacular: the land formation is similar to many islands in the area i.e. with flat tops and steep slopes. The bay is picturesque. There are several memorials which I did not know their significance till the re-cap session the following day. I saw plenty of plants and birds on land and walrus at sea. The area we were allowed to wander around is much larger than Cape Norway. I wish we were given more time to explore this place. I was back on the boat at 10:30pm.

I had another long but full day. I was blissful and joined my friends at the bar for a drink. As I had lost my voice, I hardly said a word and only had hot water and ginger ale.

I did not want to get up but had to force myself out of the bed at 9:20am. I arrived at the lecture theatre just in time for Conrad’s talk on ‘Diving Physiology of Marine Mammals’. I find it most interesting and informative and learn that elephant seals and sperm whales can dive to 2000m. It is incredible!

The talk by Bob on ‘Hunters and Trappers; Whalers and Sealers: Exploitation of the Biological Resources of the Arctic’ is surprisingly interesting. I did not fall asleep at all! However, I could not keep my eyes open during Norm’s lecture on ‘Arctic Ocean’ in the afternoon.

We had the most interesting re-cap of the voyage as the expedition team recounted what we had done in the last two days. We saw birds at the Rubini Rock, bears and walruses. Our second scenic flight,  landing by zodiac at Cape Norway and by helicopter at Cape Flora all went well. Then we voted for the best photo: 38 photos entered the photo competition and ten were shortlisted (including my photo of a bear!). Christine’s photo of a walrus and its pulp on floating ice was the winner.

Tonight we had a ‘Hawaiian Disco’ after a Russian dinner. It’s fun to see some people dressed up for the occasion. I did not feel tired and stayed at the bridge and the deck to watch the midnight sun for the last time after spending an hour at the disco. It’s really strange to see bright sunshine at 1am in the morning!

We were told to put our watch one hour ahead. It was after 2am when I went to bed. I had a busy day as I wanted to do everything on my last day on the boat.

First, I attended Nom’s lecture on ‘Climate Change’ and listened with great interest when Val talked about expeditions to the Arctic and the Antarctica offered by Quark Expeditions.

Second, there was an art and craft session. I created a small funny looking polar bear (Unfortunately it was broken on my way home). Third, I had a photo taken with the 2014 Winter Olympic torch and my first as well as last swim in the swimming pool filled with water from the Arctic Ocean.

Fourth, I packed and got ready for disembarkation the next day. Check-in luggage had to be left outside the cabin before going to bed.

Fifth, at the farewell reception, we gave our warmest applauds to the Captain and the crew for taking us safely to the Pole and the expedition team which arranged excellent programmes on the boat and at the Pole.  They were brilliant in spotting polar bears and we had seen six in total.

Sixth, I sat with the Hong Kong gang at the farewell dinner. We all had a good time and gave thumbs-up for the chef and his team. Then we watched a slideshow prepared by Dr Sam and the expedition team on our amazing journey. (A DVD was given to us as a souvenir).

But the most hilarious moment took place at the bar after the slideshow. I was having a drink with the Hong Kong gang, Kathy, Lynne and others. Alex and some expedition team members arrived. Bob had a drinks and got very high. His solemn appearance and voice had disappeared: he sang and became funny and wild. He should have a drink before giving lectures in future! Kathy was playful and high too; she took pictures with all her ‘boyfriends’. I had three cocktails though I still had problems with my voice.

Posted under My Europe trips,Uncategorized
Comments (0)