I spent two weeks in Peru in 1988 and have been to Machu Picchu. But I still longed to return one day to do the Inca Trail. So here I am to fulfil my dream.Inka Empire (to add)

I boarded the bus to Cusco from Copacabana at 6:30pm on February 28 and arrived in Puno at 8:30pm where all passengers had to change tickets and paid a tax of S1 (US$1=2.5 Nuevo sol (S)). The bus left Puno at 10 pm and arrived in Cusco at 5 am. I took a taxi to Hostal Qosqo recommended by Malu. The hostal is next to the Plaza de Armas. But apart from the central location, I found it overpriced and not comfortable (as compared with Hostal Naira in La Paz). As I had not slept much on the bus, I had a rest till 1pm.

The weather was fine and warm. I began my rediscovery of Cusco at Plaza de Armas, the historic centre of Cusco. The plaza surrounded by colonial arcades, majestic buildings including Cusco’s Catedral, Church of Jesus Maria (1733) and the University with a park in the centre remains attractive and picturesque. Cusco has gone a long way and transformed from a poor dilapidated town in 1988 into a quite elegant touristic hotspot filled with designer shops and expensive boutique hotels.

I was hungry and had a tourist menu for S25. Then I visited the Inka Museum which has been expanded since my last visit. I am pleased to find explanations in English and many nice pieces of ceramics from different regions and periods. Then I explored the area near the museum and arrived at the Museum on Pre-Columbian Arts at Plaza las Nazarenas. I paid S20 entrance fee and was impressed by the exhibits many of which are 2000-3000 years old. The ceramics are most impressive. I also saw a couple of expensive boutique hotels at the plaza which are charging US$400 for a room and US$600 for a suite.

At 6:15pm, I met Saul (owner of SamPeru Travel) with whom I had booked a 4-day Inca Trail trek and my guide Alex. The trek is not cheap costing US$637 ($517 for the trek; $70 for climbing of Wayna Picchu and $50 for a porter for carrying only 7kg of personal belongings). 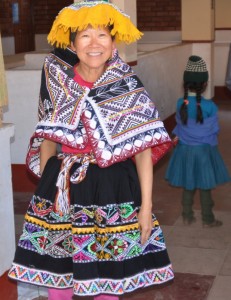 I am tired of eating in tourist restaurants and found a local place specialized in roast chickens on firewood. I had a quarter of a chicken, salad and chips for only S15. The roast chicken is delicious and juicy!

Today all cities and towns in Peru were holding festivals. I should have stayed in Cusco to watch parades and dances on Plaza de Armas. But instead I took a bus tour for S25 to visit three archaeological sites. I also paid S70 for a 2-day pass for four archaeological sites.Before boarding the bus, I went to the Catedral where a service was going on. It was filled with pious church-goers. The tourist bus left Cusco around 9:30 (30 minutes late) as a family was late. We had two brief stops to look at local markets before arriving at Pisac at noon. The site surrounded by mountains on all sides is impressive. There are 96 terraces on a slope and some 3500 tombs on another hill side. I walked up to the ceremonial centre with an Intihuatana (Hitching Post of the Sun) which affords a commanding views of the surrounding mountains and valleys below. 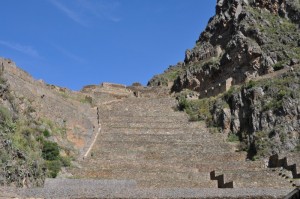 Ollantaytambo (taken on 3/3 am)

We arrived in Urubamba for a buffet lunch (S20) and set off for Ollantaytambo at 3:30pm.

Ollantaytambo (2800m) is a massive majestic fortress with spectacular steep terraces and a Sun Temple built with six gigantic granite rocks at the top. It is the best surviving example of Inca city planning and the most atmospheric of the Sacred Valley.

Ollantaytambo has been described as the archaeological capital of South America. The site though not as large as Machu Picchu is well preserved and impressive.

The last stop was Chinchero where a 17th century church was built upon an Inka temple and old palace. Unfortunately, it was so dark that I could not fully appreciate the beautiful architecture of the church and the Inka ruins. The guide did not give us much time to look around. It started to rain on the way back to Cusco. It was almost 8pm when I got back to the hostal.

There is so much to see in the Sacred Valley. I wish I had taken a private tour which would enable me to enjoy and explore these exquisite sites at leisure.

I was tired but was awaken before 7am by the noises of firecrackers. I decided to get up and visit a few churches around Plaza San Francisco. I went into the Santa Clara Church, the Temple of San Pedro and the San Francisco Church. All of them have different interior decorations: the first one has lots of mirrors, the second has a gorgeous golden baroque alter with 9 statutes while the third has mainly simple wooden altars in Gothic style. 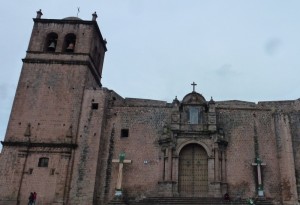 With good wifi connection, I uploaded the travel notes of the last few days in Bolivia. As I would be leaving for Quito the following day, I worked feverishly on the notes on Peru.

I spent the whole afternoon strolling in the old town. First, I went to the San Pedro market which is fairly clean, airy and lively. I had a lovely lunch and finished off with ice-cream and yogurt for only S19!

Then I walked to the San Domingo Church and visited the Convent of San Domingo located at the former site of Qorikancha. I strolled along Ahuacpinta and San Augustin before arriving at Plaza de Armas. This old part of Cusco with impressive streets with stone foundations is timeless and enchanting. I had a surprisingly nice friend rice noodle for dinner.

I got early in order to catch a 9am flight to Lima. The plane was delayed for an hour and I waited for another hour at the airport for a connecting flight to Quito. I finally arrived in Quito at 2:30pm.

I spent seven days in Peru in order to do the Inka Trail. My stay is short but rewarding. The Inka Trail has lived up to its reputation. I am pleased to be able to complete it without too many mishaps.

Cusco has developed into a prosperous city thriving on tourism. It is very touristic but I am still able to find some local flavours outside Plaza de Armas and the hotel/hostal ghetto.

A nice surprise for me this time is the Sacred Valley which I did not visit in 1988. Ollantaytambo is impressive and well-preserved. I wish I could have spent more time in this majestic Inka site and explored the valley more leisurely. I like Peru but am not sure I would return for the third time.