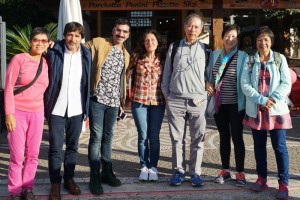 Ibrahim and Carmala had to return to Montefalcone before 11am. We left our villa at 6:30am and said good-bye to Ibrahim and Carmala around 9am on the highway to Rome. Antonio took over and drove us to Rome. Ben arranged us to stay in a two-bedroom flat. We checked in before noon. Once everything was settled, Ben who would be guiding a Norwegian group in Milan the following day and Antonio returned to Montefalcone.

We found a nice supermarket near the flat. Rupert and Bing brought plenty of Parma ham to take back to Hong Kong. Ben suggested us visit two out of the four Papal Basilicas near our flat namely the Archbasilica of St John Lateran and Basilica of St Mary. The other two major Papal Basilicas in Rome are St Peter’s and St Paul Outside the Walls. 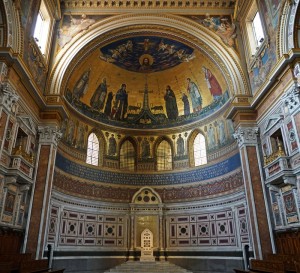 Basilica S. Giovanni(St. John Lateran Basilica), consecrated in 324 AD, is the oldest church in the West and has precedence among the four papal major basilicas in Rome. It stands over the remains of a fort of the Roman imperial cavalry bodyguards established in 193AD. During the early Roman Empire, the site was occupied by the palace of the gens Laterani who served as administrators for several emperors. The Lateran Palace was eventually given to the Bishop of Rome by Constantine I probably in the fourth century. The palace basilica which had been converted and extended. Every pope beginning with Pope Miltiades (311-314) occupied the Palace till the reign of the French Pope Clement V who transferred the seat of Papacy to Avignon in 1309. It became the residence of Pope St. Silverster I (314 – 335) and eventually the Cathedral of Rome, the seat of the Popes qua the Bishops of Rome. Hence, it ranks superior to all other churches of the Roman Catholic Church, including St Peter’s Basilica. It has the title of ecumenical mother church of the Roman Catholic faith.

Attempts were made to reconstruct the basilica. During the reign of Pope Sixtus V (1585-1590), a definitive construction plan was adopted and work began. Pope Clement XII who reigned from 1730 to 1740, had the present facade completed in 1735 with an inscription on it. The English translation reads “Pope Clement XII, in the fifth year [of his Pontificate], dedicated this building to Christ the Savior, in honour of saints John the Baptist and John the Evangelist”.

The basilica measuring 140m in length and 140m in width with a nave of 65-m wide, is like a museum. As soon as I stepped into the basilica through theHoly Door, I was overwhelmed by its exquisite interior with marble floors, statutes and sculptures, paintings, frescoes, mosaics and decorated ceiling. The 14th century Gothic baldacchino with statutes of the two patron saints is unique. The white marble statutes of the 12 apostles are the works of premier sculptors of late Baroque Rome: they were placed in these niches in 1718. There are six extant papal tombs while 12 additional ones had been destroyed during the two fires in the 14th century.

I also visited the octagonal Lateran Baptisteryoutside the basilica which was said to be where Emperor Constantine I was baptised. In front of the Lateran Palace I saw an ancient Egyptian obelisk which were taken from the Temple of Amun in Karnak in the early 4th century. It was first installed by Augustus in the Circus Maximus but was eventually taken or broke after the fall of the Western Roman Empire in the 5th century. It was then buried by mud. Serious excavation began during the reign of Pope Sixtus V with three pieces of the Lateran obelisk dug up in 1587. The obelisk measuring 45.7m high (about 4 metres shorter) and weighing 330 tons was erected in its present location in August 1588.

It is impossible to see and appreciate the history and art treasures of this archbasilica.After spending almost two hours there, I even had no time to visit its 13th century cloister and the Holy Stairs in front of the ancient palatine chapel named Sancta Sanctorum. I have to do my homework and return to take a closer look on my next visit to Rome. 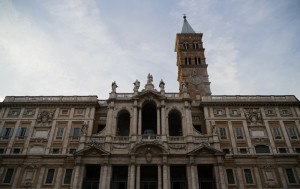 St Mary Basilica (also known as Our Lady of Snow) is one of the first churches built in honour of the Virgin Mary after the Council of Ephesus proclaimed Mary Mother of God in 431. Pope Sixtus III who reigned from 432 to 440, built it to commemorate this decision. It is the largest Catholic Marian church in Rome (92m long, 80m wide and 75m high). The 14th century campanile (bell tower) is the highest in Rome standing at 75 metres.

The original architecture was classical and traditionally Roman to convey the idea that the church represented old imperial Rome as well as its Christian future. It has a tall nave with a width of 30 metres, an aisle on either side and a semicircular apse at the end of the nave. The incredibly beautiful 5th century mosaics of the nave and triumphal arch depicting Mary’s life and that of Christ and scenes from the Old Testament including Moses leading the Jews out of Egypt across the Red Sea, are one of the oldest representations of Virgin Mary in Christian Late Antiquity. They give insight into artistic, religious and social movements during that time.

Under the high altar of the basilica is the Crypt of the Nativity (or Bethlehem Crypt). Saint Jerome who translated the Bible into the Latin language in the 4th century, was also buried here.

We took a guided tour to see the facade which was commissioned by Benedict XIV (1740-58). The impressive frescoes here tell the history of the construction of this church. We also saw precious papal robes and other treasures. The most amazing moment was when I saw a spiral staircase of several hundred years old which was built into the wall without any central support. We were not allowed to step on it!

It was after 5pm when we came out. Ben had given us the name of a restaurant but we could not find it. Eventually we gave up and had a set dinner at Ristorante Le Virtù in Tavola near S. Giovanni. A 3-course dinner with pasta, grilled sea beam, dessert and wine cost €25. Delicious and value-for-money!

Bing, Aliena and Rupert would be departing Rome around noon. After seeing my friends off to the airport at 9:30am, I took a taxi to Hotel Stromboli on Via Marsala next to the train station (€10). I had a simple plan for my last day in Rome: I would visit a catacomb and one more church before going to the opera house in the evening.

There are some 40 catacombs (underground burial grounds) built outside the walls along main Roman roads. Original Roman custom was cremation with the ash kept in a pot while the Christians preferred burial because their belief in bodily resurrection at the Second Coming. These catacombs are important for the study of burial culture, gold, glass, medallions and art history. Catacombs of Domitilla is the largest but my taxi driver recommended me to visit the Catacombs of S. Sebastino in via Appia. 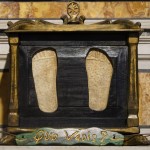 After leaving my luggage at the hotel, I set off shortly after 10am and bought a 24-hour bus pass for €7. It took me over an hour to arrive at my destination as I had to change buses. It was drizzling, cold and grey.

Visitors are allowed to enter the catacomb with a guide. I looked around in the Basilica of S Sebastino till 12 noon and saw a bust of S Sebastian attributed to Bernini. The guide gave a brief history of the burial practices and talked about S Sebastiano who died c. 288 as a result of Roman Emperor Diocletian’s persecution of Christians. He was said to be a defense against the plague.

The walk lasted for over half an hour. The corridors are narrow and dimly lit. I descended at least two to three levels to see various cells/chambers. We also saw some Roman burial places before arriving at the restored crypt of S Sebastiano which is actually located underneath the Basilica.

It was still raining when I came out around 1pm. I was cold and made my way back to the hotel. I did not feel like going out in the rain and decided to pay the hotel €5 for using Wi-Fi for 24 hours. But the internet was slow and useless for photo-uploading to my website. I gave up and went to sleep. 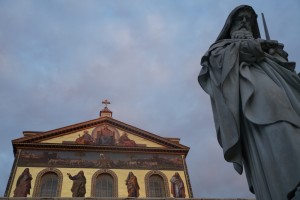 I got up around 4pm and left for the Basilica of St Paul outside the Walls. I was surprised to see a blue clear sky! But by the time I got off the metro and found the formal entrance to the basilica, the sun was setting. I knew I had to rush.

The basilica was founded by Roman Emperor Contantine I over the burial place of St Paul. The first edifice was expanded under Valentinian I in the 370s. It was expanded and by the 5th century, it was splendid and larger than the old St Peter’s Basilica. In July 1823, a fire destroyed the basilica which had preserved its primitive character for 1435 years. After reconstruction, it was re-opened in 1840 and reconsecrated in 1855.

The present basilica with a Neo-classical facade, the second largest in Rome (150m long, 80m wide and 73m high), maintains the original structure with one 30m-high nave, 80 columns and four aisles. The saint’s tomb is below a marble tombstone in the crypt. The 5th century mosaics of the triumphal arch which are original, are most impressive. All popes are portraited in a frieze extending above the columns separating the four aisles and naves. South of the transept is the cloister built in 1205-1241, which is considered “one of the most beautiful of the Middle Ages” .

After spending half an hour walking around and looking at the crypt, a security guard told me to leave. I must come back one day.

The opera house is a few minutes’ walk from the hotel. It’s my first time to see Verdi’s Un Ballo in Maschera which turned out to be the highlight of my visit in Rome. The cast and performance are superb with Francesco Meli (tenor) as Gustavo III, Simone Piazzola as Il Capitano Anckarstrom and Hui He as Amelia. I have met Hui He, the soprano in New York and am excited to see her playing a leading role in Rome.

My flight for Cairo would be leaving at 2pm. I took the 10:25am airport bus (€7) opposite the hotel. Everything went well and I was in the airport lounge around noon. The flight was delayed and took off around 2:30pm.