Last pass I reached on this GR20 hike

Today, we had a transfer from Corte to the starting point in Vizzavona (920m). By 9:30am, we were ready to resume the hike along the south part of GR20.

We had a steady but enjoyable climb for a couple of hours. The first part took me through beautiful dense forests. My legs functioned much better after a rest. I reached first Bocca Vizzavona (1163m) and later Bocca Palmente (1800m) with relative ease. Simon was more relaxed now: I was walking on my own space at the back, enjoying the solitude and peacefulness.

We found an excellent spot for lunch on a cleared flat rocky top. We had panoramic and stunning views from the eastern plains, Capu Rosso (2498m) and back to Monte D’Oro (2389m).

After passing the crest, we caught a glimpse of Monte Renoso (2352m) before reaching Capanelle. At 3pm, we arrived at Gîte U Fugone (1560m) and had a leisure afternoon.

I met Kay and Hugh, two independent hikers from the UK in the restaurant. They basically followed the same route and stayed in same places. They had arranged a taxi to take them from Bavella to Porto Vecchio on October 2 as there’s no bus on Sunday. As they knew I would be heading to the south, they kindly offered to give me a lift. I was most grateful. But without bus, I could not travel from Porto Vecchio to Bonifacio where I had already booked a hotel. Hence I had to cancel the hotel booking before September 29 during the penalty free period. Thanks for Gemma’s help, as soon as Wi-Fi connection was available in Cozzano, I used her iphone to cancel the hotel booking online on September 28.

Today, we started off with another 3-hour steep climb. When passing through the picturesque sheepfolds of Traghjete, I watched several men on horses moving their sheep from the ridge to the valley below. I had a pleasant hike towards the Plateau of Ghialgone.

After crossing the footbridge of I Spiazzi, we continued our walk through the wood covered with the rarest and most majestic Corsican fir trees. We had fantastic views of lakes and stunning landscape along the route. 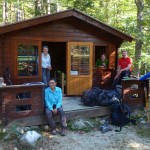 By 5pm, I arrived at the Relais San Petru, a beautiful site with several wooden chalets, a camp ground and a cozy restaurant with a fire place. I watched the chef preparing grilled pork over the fire and had a delicious dinner. I shared a chalet with five members. As I was tired and it was cool outside, I had a wonderful sleep.

We set off at 8am and had a steady but enjoyable walk through the wood. It’s nice and cool. I arrived at Bocca d’Oro (1840m) shortly after 9:30am. From Refuge Prati (1820m), we had fabulous views across to the Renosu massif.

Then I had to walk along rocky terrains going up and down rock slabs for about an hour before reaching a nice spot for lunch on the ridge just before 1pm. On clear days, one may see Elba from here.

From a distance, I saw Kay, Hugh, Jane and Ian sitting on rock slabs below. Apparently Kay had fallen in similar way as I had done on Day 3. But she is very fit and tough. After resting for half an hour and having taken pain killers, she was ready to move on. It’s Ian’s birthday today. Jo and Simon brought two bottles of prosecco and we all sang Happy Birthday to Ian. A memorable occasion!

After lunch, we walked along the ridge scrambling through a landscape with spectacular rock formations. They are art works sculptured by nature! 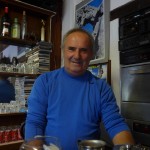 After an hour or so, we began a long descent through the forest to Cozzano. Pork meat is an institution in Corsica and owes its quality to its mountain-roaming and chestnut-eating pigs. Cozzano is the flagship that maintains this increasingly rare tradition. It’s not surprising to find many gigantic chestnut trees and free roaming pigs in the wood on our way to Cozzano.

At 5pm, I reached Gîte Bella Vista (730m) run by Pierre and his son Baptiste who always smiles. Ian treated us with beer and tea on arrival.

For the first time, we had alfresco dining as it was warm outside. Baptiste’s mom is a good cook and we had a wholesome Corsican dinner with soup as starter and peas and veal as the main course. The family keeps over 50 pigs and their sausages and ham are for sale.

Baptiste presented Ian with a birthday cake and a litre of sweet local dessert wine. I could hardly sleep tonight as I was attacked by bed bugs. I found over 20 bites on my neck in the evening. A terrible experience!

We sat off again at 8:30am returning to the mountain ridge from which we descended the day before. We climbed 1000m within three hours. The first half of the climb is gentle and gradual mostly through hedges between private lots. By lunch time, we reached Bocca di Surraghedu (1786m).

Then we walked along the Areta a Mondi, a beautiful rocky crest with numerous pinnacles for the next two hours. Along the way, we had fantastic views of the region and the path we would be following in the afternoon.

We descended through a forest of centennial trees. The autumn colours were beautiful. We were making good progress and the weather was excellent and warm. We took a rest by the river for over 20 minutes. Many of us took our shoes off and dipped our tired feet in the icy water. After crossing the stream, we finally arrived at Bassetta. I noticed some smokes in the field on my way to Bassetta. 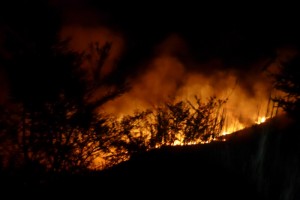 I was the last person to reach Bergeries de Bassetta (1360m) at 4:30pm. The bergeries would be closed the following day and we were served with delicious food and Corsican wine.

Then we discovered the smoke had actually come from a hill fire. Some firemen arrived while we had our dinner. I went out to look at the fire which was about 150m from our place. Fortunately, the wind was blowing in opposite direction. By the time I went to bed about 9pm, the fire was under control. As I was exhausted owing to lack of sleep the night before, I managed to have a decent sleep before the big day. 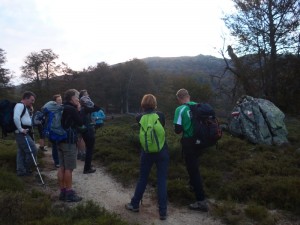 We had the longest and hardest day of the trip. We got up at 5:30am, had breakfast at 6pm and set off under a starry sky at 6:30am with our head torch on. Jo and Simon had been watching the weather forecast anxiously: we need a clear window of five hours to get over Bocca Stazzunara (2025m) and descend to Asinau through steep rocky terrains and rock slabs. Climbing of the famous Aiguilles (French for needles) (1611m) that dominate the landscape of the Alta Rocca, on the way to the Col of Bavella would only be possible with fine weather. According to the forecast, there might be rain and thunder after 2pm. As a result, Jo worked out a couple of options depending on the weather.

We were thrilled to have a good start. It was not cold and the sky was clear. I had an easy time for about two hours walking over the grassy Plateau Coscione. 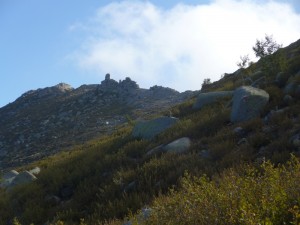 Then we had a steady climb for an hour over rocky terrain towards the Bocca Stazzunara just below Monte Incudine (2134m). By 10:15am, I reached the col which affords stunning views of the rocky Monte Incudine range as well as the Aiguilles. On a clear day, one might see Monte Cinto and Paglia Orba behind and Sardinia in the distance in front. But mist suddenly appeared from nowhere and it was too windy to stay for long. I only took a few pictures before racing at top speed towards the refuge of Asinau (1530m) below.

The downhill path is very steep and rocky. I had to put away my hiking poles freeing my hands to grab onto the rocks on my way down. Often I slided down to ensure safe landing. I walked very slowly and fell a couple of times. Luckily I was not hurt. I was relieved when I finally reached at the refuge at Asinau (1530m) at 11:40am. I sighed with relief and relaxed for ten minutes before resuming the hike before midday. 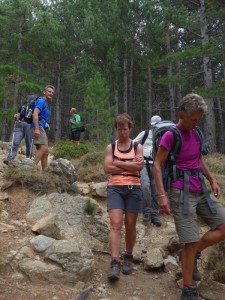 Thunder finally came! We had to return to the lower path to Bavella

It would take five hours from Asinau to the Col of Bavella, the ending point of our trek. We followed an easy path along the river valley for over an hour. I was relaxed and enjoyed the shady and lush green path.

Shortly after 1:30pm, we began a steep hike which would take us to the Aiguilles through the woods. Ten minutes later, we heard thunders. Jo and Simon immediately ordered the group to descend: it would be dangerous to climb over the rocky pinnacles at the crest in bad weather. Instead, we continued with the path in the lower part of the river valley. We walked for over another two hours before beginning an ascent to the Col de Bavella.

More thunders came. It also began to drizzle. By the time I arrived in the Auberge du Col de Bavella (1218m) around 5pm, it was misty and wet.

We celebrated the successful completion of the 11-day hike with prosecco and lots of wine and beer that evening. On behalf of the group, Jane presented a small present to our most amicable leaders Jo and Simon. We had a wonderful group: all members (except me) are very fit and we get along well. We went to bed early as all except me had to take the 6am bus to Bastia to catch their flight to the UK or Amsterdam in the morning.

I got up before 5:30am and spent half an hour with my friends before their departure for the airport.

Bavella with stunning Aiguilles – I have completed the 11-day hike without mishap!

Remarks on GR20 Trek (see the next entry on Corisca)

Posted under My Europe trips,Trekking
Comments Off on 3 Months- 3 Continents (4): Corsica September 14 – October 6, 2016